Eleonore Deneuve is the Normandy native behind Cheezelo, a new shop and cafe sitting between King’s Cross and Euston stations 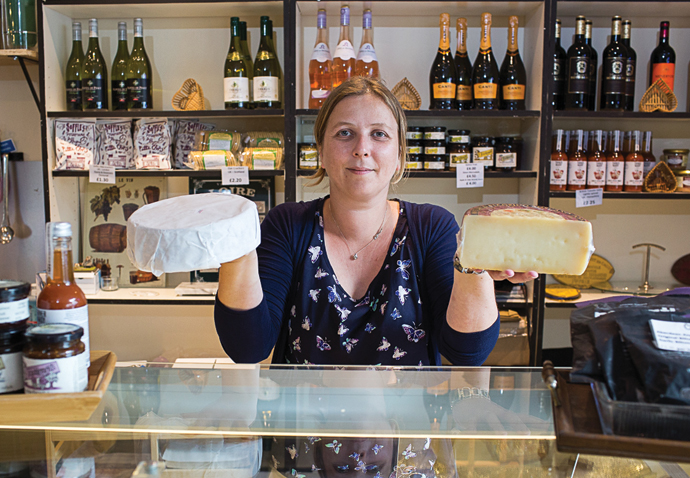 Eleonore Deneuve – ‘Britain has a lot of cheeses to offer…’

“INSTEAD of buying croissants I’d go to the cheese shop every morning,” says Eleonore Deneuve, recalling her cheesy childhood in Normandy.

Now a proud Londoner, she’s shrugged off the uncertainty of Brexit by launching a new cheese shop and café in NW1.

Cheezelo has taken the site of an ex-vaping shop in Chalton Street, almost equidistant between King’s Cross and Euston stations.

This patch of Somers Town, just a minute from snarly Euston Road, has escaped the developers so far. It’s still got a feisty, independent spirit – free from the high street chains. A few doors up, a shop called Aizah sells classic Asian confectionery such as rasmalai and gulab jamun. Directly opposite, Red Hot restaurant dishes up fiery Szechuan cuisine.

Cheezelo is the new kid on the block – just a month old and still finding its feet. This is the only dedicated cheese shop for miles around.

Eleonore stocks more than two dozen varieties: a third French; a third British; the rest from across the Continent. Unsurprisingly, Normandy gets star billing with Camembert, Pont-l’Évêque, Neufchatel and an exclusive cider-washed number called La Bonne Cauchoise, which her family brings over when they visit.

The food menu is a bargain. You can eat from breakfast to evening, taking a table inside or outside on the street.

She sources her sourdough bread from the Sunflour Bakery in Caledonian Road. A posh cheese sandwich is £4; a toasty with side salad £5.50.

Eleonore also bakes cheeses in the oven, topping them with combos such as honey and rosemary, apples and sultanas or truffle oil, garlic and herbs.

But it’s cheese platters that are her speciality. Available in various sizes, you can also have them delivered by UberEATS.

I spent a happy hour in the shop, soaking it up. It’s a bright, straightforward space with the occasional milk urn or leather cow bell on the walls for decoration.

A small wine and beer list is available by the glass or bottle, including a Minervois, St Emilion, Picpoul de Pinet and a couple of craft beers. She also stocks a selection of deli foods to take home, such as pâtés, olives, crackers, chutneys, salamis and sauces.

Eleonore has a creative streak and also makes her own vegan cheeses.

I tried a paste made with almonds, garlic, dill and lemon which tasted remarkably like Boursin.

I felt a certain poignancy grazing on the cheeses of Europe at Cheezelo, just a five-minute walk from the Eurostar. Eleonore loves this city. “I think the mentality is something different to France. The British are less judgemental. They were open to multi-culturality,” she says, tailing off mid-sentence.

She ditched a career in IT to sell cheese: “Starting a business through Brexit is a risk I took. I’m usually an optimist and Britain has a lot of cheeses to offer … whatever happens there will always be cheese.”