Were you being served?

A genre almost as dead as a parrot, the 70s sitcom is celebrated in a new book. Stephen Griffin goes down memory lane 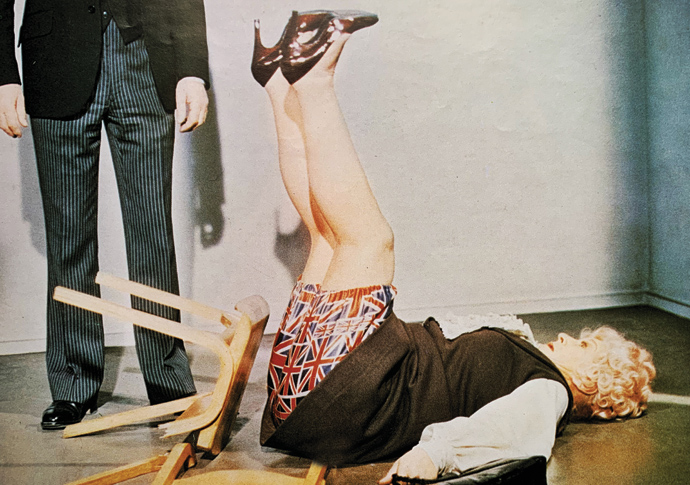 Mollie Sugden keeps the British end up in the film version of Are You Being Served?

WHO says you can’t judge a book by its cover? With its title in a retro Dad’s Army’s Cooper Black typeface emblazoned on a background of equally retro wallpaper, it’s clear that Robert Sellers’ Raising Laughter: How the Sitcom Kept Britain Smiling in the 70s, was always going to wear its nostalgia on its sleeve. It’s an exhaustive chronological month-by-month canter through every 70s sitcom.

Remember sitcoms? Before the curse of reality TV, quizzes and interminable panel shows, sitcoms were the pivot of the evening’s viewing, the jewel in the scheduler’s crown. And funny was money. If you got it right, your sitcom was your route to riches – if it caught on there were the endless repeats, the potential novelisation, the US reworking, the radio version, the stage show, the Australian tour, the feature film spin-off…

But you may wonder why Sellers – author of books about Oliver Reed and assorted hellraisers and the Bond producers – has alighted on the 70s? Simply because, he argues, it was the genre’s golden age.

Following the psychedelic 60s, the 70s was famously the decade that taste forgot, a murky brown and orange time of the Troubles, rampant inflation, civil unrest, the winter of discontent and the three-day week. Still, thanks to the power cuts at least we learned that our muddy brown and orange decor looked better by candlelight. If there was ever an era (other than the current one) in which we seriously needed a laugh it was the 70s.

God! It was a depressing period. And it was much the same on telly. Oh how we revelled in bigoted, down-at-heel misanthropes: the Steptoes, Rigsby, Alf Garnett… they all became unlikely antiheroes.

It was, however, an exciting time for the sitcom. Race, class, religion, politics, sexuality… little was off the table in 70s sitcomland. And in an age before focus groups and committees, an all-powerful commissioner could green light a project seemingly on a whim.

Of course this was a double-edged sword – it may have given a chance to breakthrough shows but, as this hugely enjoyable book reminds us, there was little comedy gold amid the corn. There were sitcoms and there were shitcoms; let’s not forget that for every Fawlty Towers there was a shoal of Yus, My Dears.

Frank Muir likened the sitcom formula to a three-legged stool: there was the performer, the writer and the producer – and if one wasn’t up to the job the stool would collapse. Sadly the TV schedules were littered with a veritable Repair Shop of broken furniture.

The leg that arguably matters most to viewers is the performer and it’s interesting to think how old favourites would have been if the preferred actor had accepted the role. Can you, for example, imagine Peter Sellers or Leo McKern as Alf Garnett? Norman Wisdom as Frank Spencer? Ronnie Barker as Reggie Perrin? David Jason as Corporal Jones? Crossroad’s Benny as Porridge’s Godber?

In the 70s the “sit” part of the term was fairly impressive. Practically every situation was covered: from ancient Pompeii to a lighthouse, from a monastery to a department store, like Ocado, there was a sitcom just for you. Yes, the “sit” might have been okay, it was often the “com” that suffered.

That said, a handful of producers were not afraid to push the envelope in terms of breaking down barriers. But controversy is a strange beast – at the time Till Death Us Do Part was a cause célèbre due to its swearing, now that’s passé and its attitude to race renders it uncomfortable viewing. No one these days would turn a hair at a single man sharing a flat with two single girls but even Man About the House raised a few eyebrows in the so-called permissive 70s.

What really strikes you reading the panoply of titles – many part of the furniture even in the 2020s, others lost in the murky brown and orange mists of time – is the lack of diversity.

The Fosters just about creeps in but they would even cast white actors in Asian roles. Yes, I’m looking at you Spike Milligan in Curry and Chips and you Michael Bates in It Ain’t Half Hot Mum.

Also both the BBC and ITV (yes, kids, there were two broadcasters) offered few opportunities to the fairer sex. The number of female writers could be counted on the fingers of a mitten, only Carla Lane managed to shatter the glass ceiling.

So what of the future of the traditional sitcom?

The mainstream channels have all but given up on them – indeed ITV have said they’ve pulled the plug on the genre. The few that remain on the BBC have mainly gone the glossy, multi-writer, filmed American route – some are really good but they’ve lost a lot of the eccentricity and electricity of the best of the 70s examples.

So what’s replaced the studio audience sitcom? Why, Mrs Brown’s Boys of course.

• Raising Laughter: How the Sitcom Kept Britain Smiling in the 70s. By Robert Sellers, The History Press, £20