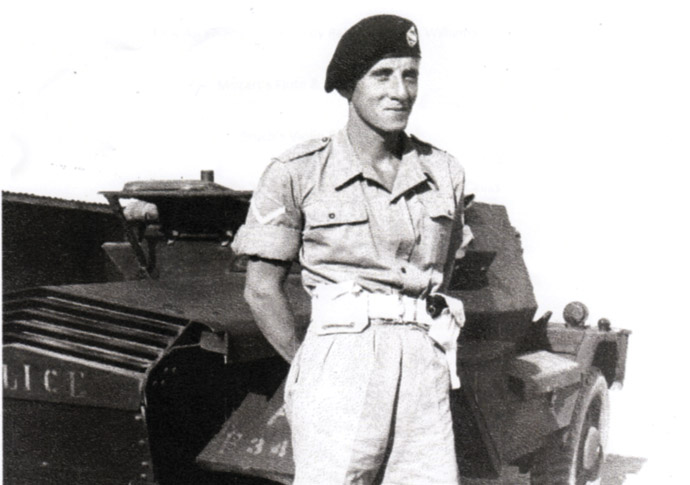 WHOEVER would ever have associated the kind, gentle, erudite elderly Cecil Woolf with the striking image of him on the front of the Order of Service at his memorial on Saturday as a young tough squaddie, beret sharply pulled, a young lance-corporal fighting in Italy in the Second World War?

But Cecil Woolf’s family, who live in Mornington Crescent, couldn’t have chosen a more fitting image of the man they knew – gentle, yes, but also a man of convictions and feeling for the underdog.

These thoughts crossed my mind as I sat in the elegantly refurbished St Peter’s Church in Belgravia where more than 150 friends, relatives and representatives of various literary bodies assembled in memory of Cecil Woolf who died at 92 in June.

Various orations were made – by Claire Nicholson of the Virginia Woolf Society and Vivien Whelpton of the War Poets’ Association – for, of course, Cecil Woolf was nationally known as a publisher and the nephew of Virginia Woolf. Often, in his later years, he would be invited to speak at conferences as the “last man who knew Virginia Woolf”.

But his widow, Jean Moorcroft Wilson, an acclaimed biographer, reminded the audience of her husband’s views on the Falklands War.

Later, she told me that one of their little coups in publishing when she and her husband published best-selling books entitled Authors Take Sides, first on the Falklands War, then on the war in Iraq.

She recalled how she had been used to receiving a small order of a few dozen copies for their Bloomsbury Heritage books but for the Falklands War, she got a shock when the WH Smith rep wanted 2,000 copies immediately.

Among the authors they persuaded to write for the book – they weren’t able to pay them – were Margaret Drabble, Salman Rushdie, Michael Holroyd and left-wing MP Tam Dalyell.

In the book, they exposed the scandal behind the sinking of the Argentinian cruiser, the Belgrano. Cecil Woolf held similar radical views on the Iraq war.

Of course, you can say he had inherited his tough spirit from his fervent feminist aunt Virginia, but whatever it was, Cecil Woolf seemed not simply a man of many parts but, in some ways, a complete man who abhorred cruelty and was willing to face up to any form of injustice.