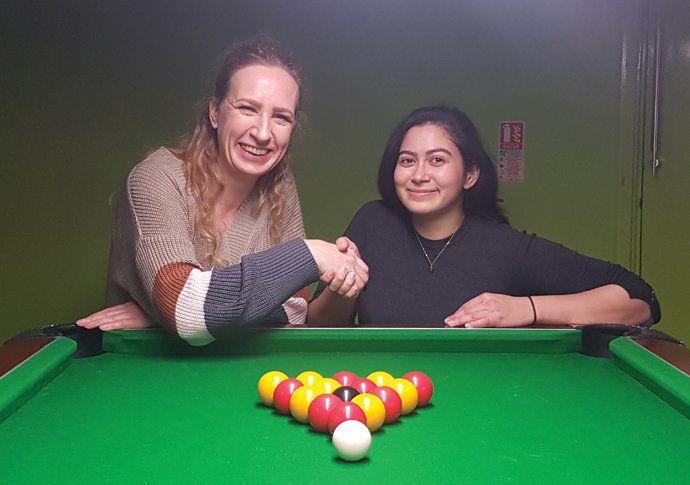 SMILES and a friendly handshake signalled the countdown for what promises to be a thrilling final in the Chalk Farm Pool League’s Ladies’ Singles Championship.

Defending champion Aishah Omar, who plays for the King’s Cross Gunners, will take on King’s Cross Invader Rita Slapna in a best-of-five-frames final at the Boston Arms in Tufnell Park on June 15.

A total of 14 potters from the league entered the women’s knockout competition on Monday night at the Hurricane Room in King’s Cross. And when the chalk dust settled, it was Aishah, who won the title last season when she was playing for Islington-based side Green Man, and Rita, who will be appearing in her first ever final, that were left standing.

League chairman Shaun Pollard is predicting “a very exciting match” in the summer, one that he fully expects to go down to the wire.

He added: “Aishah will be the favourite as she won the title last year. Although I missed the action on Monday night as I was playing at a different venue, I heard she played extremely well. To return to a major final two years in a row is a fantastic achievement for any player.

“But Aishah knows that retaining her crown won’t be easy. Rita won’t be going into the final just to make up the numbers.

“Both players have bags of experience at the table, and regularly turn out for the Central London county team, so know how to handle the big game pressure.”