Santa and all his works

Have yourself a scary little Christmas as Mark Gatiss comes bearing a sackful of seasonal scares. Stephen Griffin helps him unwrap them 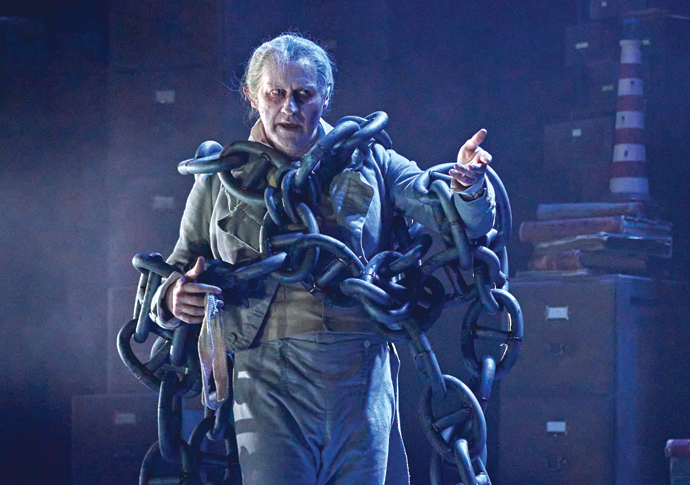 MUCH has happened in the nine years since Mark Gatiss and I last spoke.

Among (many) other things he’s appeared in Wolf Hall, Game of Thrones, Taboo, Good Omens, Mapp and Lucia, Dad’s Army and a revival of The League of Gentlemen, he’s starred on stage in Coriolanus and The Madness of George III, and he’s co-written a three-part Dracula and directed a couple of MR James ghost stories.

I’ve cleared out the loft. Nearly.

On this occasion we’re chatting on Zoom, the Sherlock co-creator lounging on his bed “like a potentate” because it’s the only room in his house where the wifi works.

It’s only mid-November but we’re talking Christmas. Or more accurately his contribution to festive chills. After a Covid-induced hiatus last year, this year he’s come up with an embarrassment of riches: he’s ventured up north from his Islington home to appear as Jacob Marley in his own adaptation of A Christmas Carol at Alexandra Palace and directed another MR James for the BBC and remade The Amazing Mr Blunden for Sky.

As you’d expect, his Carol has ramped up the supernatural element.

“I’ve always wanted to do it,” he says, explaining that the Albert Finney film version left an indelible impression on him at the age of four. “But I think the novel is underrated as a ghost story,” he adds.

“It’s the beginning of the proper fusion of Christmas with ghosts and it has four particular ghosts in it. Obviously there’s a lot of productions of it around these days so I suppose to cement my reputation as the prince of darkness we’ve emphasised the ghastliness. But it’s a very faithful adaptation.”

The original, he says is full of anger and righteous rage. But it’s also joyous and he’s clearly delighted to be back in a theatre. “I think in many ways it’s the perfect show to come back with because it’s full of joy.”

And what a theatre! “It’s almost too good to be true, this rediscovered, ruined Victorian theatre. It’s such a beautiful place – we must be about the sixth show to play there since the 30s when it was closed down. They’ve restored it brilliantly to what they call ‘managed decline’ so it looks ruined but it’s actually state of the art backstage.”

Apart from his Ebenezer, Nicholas Farrell, his favourite Scrooge is Alastair Sim. He feels the character should be played by an older actor because “he needs to feel it’s too late. You need to feel he’s spent most of his life steeped in avarice and misery.” 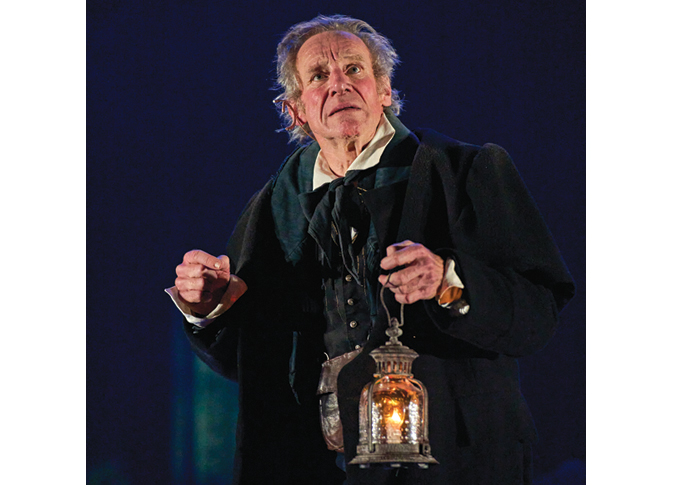 The casting is crucial, he thinks, and Sim personified that. “You have to have a profoundly good and nice and funny person who can play mean. Sometimes Scrooge is played by actors who play mean a lot and you don’t quite buy their conversion.”

So does the prince of darkness believe in ghosts? “No, but I’m afraid of them. That’s what I always say. I’m a rationalist: I do and I don’t.

“My friend Derren Brown has a great quote about that – ‘extraordinary claims require extraordinary evidence’ and evidence is not extraordinary, it’s patchy at best. I think there is something in it, but I don’t think it’s dead people coming back.”

Instead he’s more inclined to lean towards the “Stone Tape theory” – the idea, based on Nigel Kneale’s seminal TV ghost story, that “buildings can retain an impression”.

As someone whose childhood was steeped in cinematic horror and whose subsequent career has taken him down many a cobwebbed corridor, Mark maintains he’s not unscarable. “I’m just always waiting for the thing that will do it. Every year someone will say ‘this is the new Exorcist’ and they never seem to be.

“I think the last thing that genuinely unsettled me was The Ring because it was properly frightening and new.”

He has particular fondness for the BBC’s 1970s Ghost Story for Christmas strand of MR James tales and is delighted to pick up the baton. In recent years he’s directed a couple – The Tractate Middoth and Martin’s Close – and this year he’s offering up The Mezzotint with Rory Kinnear.

“After Martin’s Close the BBC asked me to do another one, but an original one, which I wrote.

“It’s set in a hospital and mostly has a cast of old people – and then Covid hit. First we couldn’t make it because of Covid and then when I was working out how we could make it I thought people don’t want to see this, what we need is some more MR James. But what I had to consider was a smaller story with a smaller cast, which was by necessity more cerebral, I suppose.”

“I really love that film. It’s been a great source of comfort to me for years. It’s my go-to comfort film so the idea of doing a new version felt slightly heretical but then I read the book again”, adding: “It’s a good story and you want to do it again for a new audience, who, with the best will in the world, are not going to watch it on Talking Pictures.”

Despite concerns that he was “treading on his own dreams”, he’s happy with the result. “We’ve got three of the original cast back for cameos, which is delightful… Simon Callow has waited all his life to play Mr Blunden and Tamsin Greig is amazing as Mrs Wickens.”

He’s fulfilled so many childhood ambitions, is there a highlight?

“Writing for Dr Who was a highlight, and having the keys to Baker Street for a bit and it being such a success – it’s extraordinary to think of the scale of that. And doing the Christmas ghost stories.”

A beat: “I think the most important thing for me is being part of something and continuing the legacy.

“It’s not just an exercise in nostalgia, you’re actually trying to push it on and doing the next incarnation of certain things… or increasingly trying to do new things which might become their own whatevers.”

As for this year, he’s as busy as ever at Ally Pally but Christmas Day and Boxing Day will be spent at home with his partner, actor Ian Hallard, and his in-laws. Then it’s more Christmas Carol – “We’ve got an insane panto-like schedule” – directing a play at Chichester, Mission: Impossible 7 and Inside No 9.