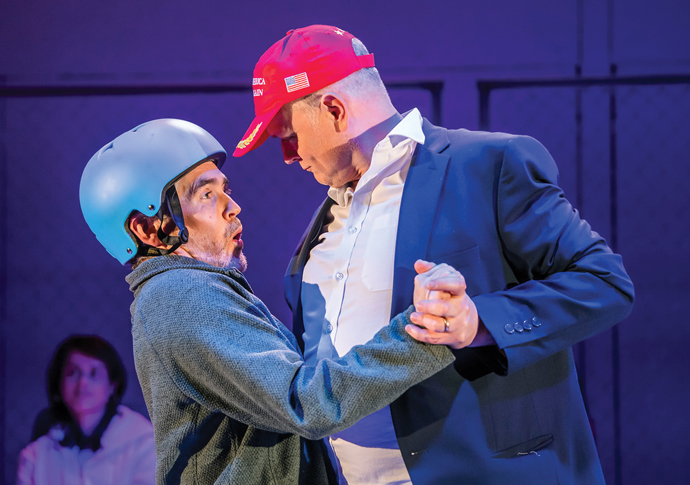 Fergal McElherron and Duncan Wisbey in The Special Relationship

THE title and the flyer’s pen and ink drawing of Donald Trump and Theresa May dancing made me wonder if The Special Relationship was going to be Spitting Image in tap shoes. The left’s new shorthand version of everything bad – put Trump on it.

Little did I know the treat I was in for! Hassan Abdulrazzak takes us on a teasing, twisting journey through the US criminal justice system as experienced by a group of six British deportees. Yes, you read that right – they are British.

This is a wonderful piece, directed by Synergy Theatre’s Esther Baker, who has assembled a talented, diverse cast and made them into a tight team.

The issues the play deals with are searing personal tragedies, every one. But Abdulrazzak and Baker know the value of lifting these heartbreaking stories with some of our favourite tunes. Choreography by Lucie Pankhurst is sharp and sassy. The strutting ICE cop Curtis (Nicholas Beveney) winks his way into our affections, committing appalling acts as he boogies across the stage.

Often a playwright will paint a tragic situation as black and white. The victim entirely blameless, the system completely unfair. Not here: in the first half, all confess their crimes – yes, I did drugs; yes, it was fraud; yes, I guess I killed her. We’re left confused. But aren’t you the victim? Aren’t you supposed to be 100 per cent innocent and loveable? They commit a crime, they do the time. And then? Only then do we see the fury. The hopelessness. No, they didn’t get justice. They get another punishment.

Trump (Duncan Wisbey) waltzes on… with some special guests. I won’t tell you who, you have to see the show. You won’t be sorry.