Review: Five Guys Named Moe, at Upstairs at the Gatehouse 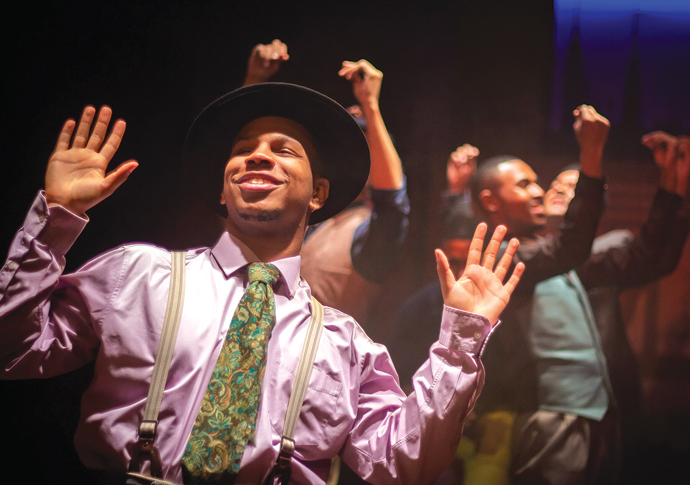 UPSTAIRS at the Gatehouse, a much-loved fringe venue, always manage to produce big-hearted musicals and consistently punch above their weight. Their sensational production of Five Guys Named Moe is no exception and is guaranteed to put a smile on your face and a spring in your step.

The plot may be scant, but this memorable evening features a stunning five-piece band playing Louis Jordan and a five-star cast that you’d normally expect to see in the West End.

Clarke Peters’ story is simple – Nomax (Juan Jackson) comes home drunk and in despair because he’s mistreated his girlfriend yet again. He puts on the radio and hits the bottle.

Five guys named Moe step out of the radio in order to set things to rights and prove to Nomax that he loves Lorraine and needs to treat her better. Through their songs and homespun wisdom, they aim to teach Nomax how to keep his woman.

Despite the chauvinism of the central conceit (and many of the lyrics), it’s hard not to love Jordan’s trademark jump blues.

It’s beautifully staged by Mykal Rand with the audience sitting either side of a traverse stage. Simple flourishes, sassy tunes and a super-talented cast keep us engaged throughout.

We don’t need much encouragement to sing along, raise our hands and tap our feet with harmonies this good and such broad smiles.

This is a tight knit ensemble but everyone is offered the chance to shine. Jackson excels as the conflicted Nomax, we all fall in love with the easy charm of KM Drew Boateng’s Big Moe, Kieran Mcginn, playing Four-eyed Moe, displays a talent for comedy, while AJ Lewis’s Eat Moe has the voice of an angel.

Equally remarkable are the two actors playing No Moe (Andre Coulson) and Little Moe (Christian Maynard), who are making their professional debuts. Uplifting.