Reason and passion in Britten's ‘Death in Venice' 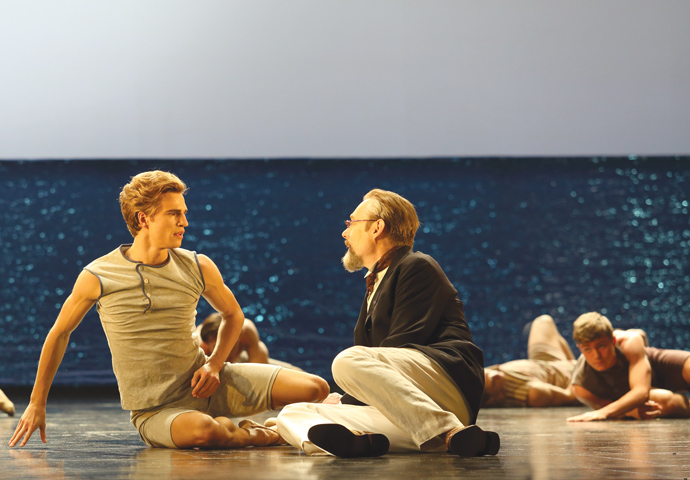 Leo Dixon as Tadzio and Mark Padmore as Gustav von Aschenbach in Death in Venice at the ROH. Photo Catherine Ashmore

Benjamin Britten’s Death in Venice is the confessional piece in which he (as you might say) comes clean. After a lifetime of writing music that whispered his homosexuality in coded terms, Death in Venice declared it outright. It’s the great gay opera.

But it’s more than that. Not just the story of the ageing writer Aschenbach in hopeless love with an Adonis, it explores the broader themes of reason, passion and creative atrophy in Thomas Mann’s originating book – to which it’s far more faithful than Visconti’s film that came out in the 1970s just before the opera premiered.

A good production needs to take all this on board. And David McVicar’s new staging for Covent Garden is an outstandingly good one that delivers the whole package and handles the homo-erotic content (of which there’s plenty as athletic young men frolic on the beach in states of undress, scrutinised by Aschenbach) with balance: neither coy nor dribbling at the mouth.

The sets aren’t as evocative of Venice as you sometimes get but they’re impressive: sparely handsome, with the stunning feature of a giant gondola that fills the stage. And musically the whole thing is magnificent.

Mark Padmore’s Aschenbach is limited in gesture, locked into the body-clinching stance he standardly adopts even in concert. But it suits a character he plays as vulnerable from the start. And matched by singing of exquisite, fragile beauty it ensures that Aschenbach is tragic rather than ridiculous.
Dancing the silent role of Tadzio the Adonis, Leo Black is enigmatically seductive. And there are so many pin-sharp cameos distributed among a good young cast, I couldn’t name them all.

But the undoubted star is Gerald Finley who sings the assorted roles that usher Aschenbach towards death and does so with a virtuosity as spectacular as his assor­ted wigs (which have virtuosity in their own right). Elegant, immacu­late, sophisticated, Finley is a class-act: one of the great singers of our time. And he performs here in a great show.

An important show. The must-see of the season.