Shepherd’s of Westminster, just round the corner from Parliament, serves terrific classic British dishes in an atmosphere of hushed intimacy 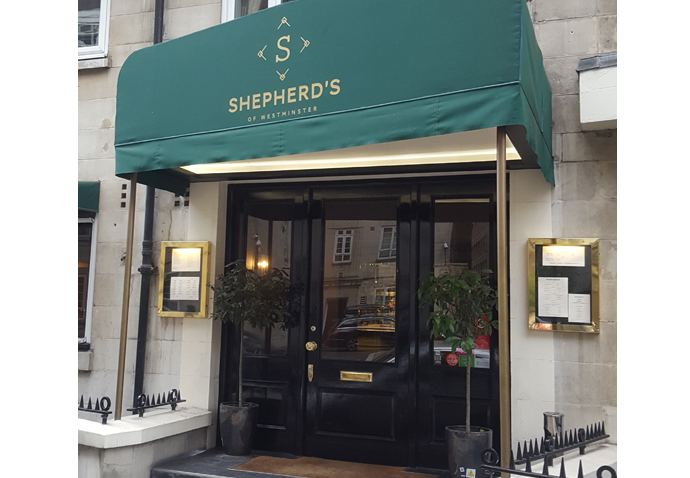 FEW restaurants are as discreet – and intriguing – as Shepherd’s, a plush restaurant in Westminster. Serving classic British food, it’s long been a trusty favourite of the MPs and civil servants who work in and around Parliament.

In a sense, I feel guilty reviewing the place. This is one of London’s more secret destinations, distinguished by an atmosphere of hushed intimacy perfect for an off-the-record rendezvous. “It has that establishment feel – but with much better food,” declares my companion, who is quickly smitten by the experience.

Shepherd’s has an illustrious history. It was once owned by famous restaurateur Peter Langan and later Sir Michael Caine. You’ll find it on the ground floor of art deco Marsham Court. Walk in past a glossy bar where waist-coated staff mix cocktails such as the “Deputy Speaker’s”.

BBC Parliament plays non-stop on a flat screen. The tasteful, grey-green walls are hung with political cartoons depicting characters such as Michael Foot and Thatcher in their pomp. In the far corners, heavy soundproof doors lead into two private dining rooms, where I suspect many a deal has been done.
We took our seats in a snug booth, designed for maximum privacy, in the main room.

“We’re almost attached to Parliament,” says our charming waitress, who adds that nearly all of Shepherd’s customers work in politics.

The food is terrific, cooked by a chef whose CV features a stint with Fergus Henderson of St John. The shepherd’s pie is their signature dish: an earthenware pot of lamb and golden piped potato, with a large bone jutting dramatically out the top. This was served correctly, with an accompanying bottle of Worcestershire sauce.

Other mains include grilled Dover sole, cod and mussels, roast pheasant, or a duck leg with lentils, black cabbage and greengage jelly. A line on the menu advises “All game may contain shot”.

But it was the starters that knocked our socks off. The smoked mackerel was a minimalist work of art, with just three bold elements on the plate: a cleavered section of gleaming mackerel – tail and all – a dollop of crème fraiche and a feisty pickle of cucumber laced with ginger.

My friend’s salad was also a knock-out, starring sultry red chicory leaves, their bitterness balanced by pomegranate seeds. There was a handful of almonds for extra crunch and jagged chunks of a raw cow’s cheese called Graceburn.

As you might expect, the dessert menu is extensive. I settled for a date and pear pudding with clotted cream, although my head was also turned by the Welsh rarebit.

When should you visit? On a weekday, for a start, as Shepherd’s closes at weekends. Dress up and treat yourself – perhaps next time you’re out and about enjoying London. Tate Britain is just a 10-minute walk down the road.

Last word goes to our waitress: “My feedback is that politicians are very polite people… very interesting.”

Well, she should know.