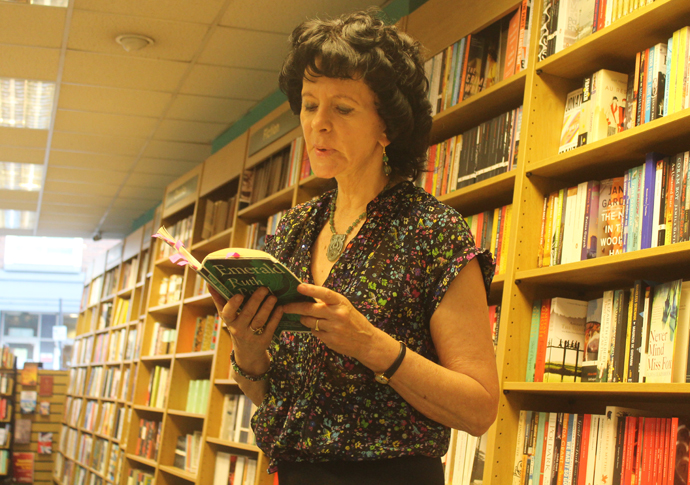 Poet Ruth Padel at the launch of her book at the Owl Bookshop in Kentish Town.

WHENEVER I quarry into the memories of my mother they come back, fragmented, half remembered. But for the eminent poet Ruth Padel memories of her mother, who died last year at 97, meant so much that it helped inspire a book of poems, Emerald, launched on Thursday at the Owl Bookshop, Kentish Town.

Entranced by emeralds, Padel had been research­ing the jewel, a summa­tion of all that is precious in life, that it all began to be part of what became an elegy for her mother.

She was a remarkable woman, and as the great-great-granddaughter of Charles Darwin, became a biologist. Ruth Padel’s father retrained after the Second World War and became an eminent Freudian psychoanalyst and a leading figure at the Tavistock Clinic.

The attraction of emeralds to Padel was all part of a piece considering her upbringing.

When I grew up as a child I wasn’t aware it was a big deal [being related to Darwin],” she said. “My mum and also my grand­mother were always keen to revere nature to us – to look under a leaf to see what’s underneath, to look at a bird in the garden.”

Referring to her book, she said: “I would like people to take away an understanding of what it is like to grieve, because we all have to lose our mothers, and explore how it feels to be ever adjusting to missing her. She would be amazed that so many people are here, and she would be amazed there is a book about her.”

Her mother, who died of an aneurysm, was perky right up until her death, playing a word game with her family gathered around her – and beating them!

Padel is a professor of poetry at King’s College London, a fellow of the Zoological Society, a former Oxford Professor of Poetry, a writer of 11 collections.

But I knew there was no side to her the moment she rang me back at my home on Tuesday night, apologising for not being able to talk to me earlier.

“Where are you?” I asked. “I’m at the South Bank.” I could hear the traffic in the background. Later, she explained she had attended a poetry evening.

In the tradition of the great Darwin she wrote a “narrative” poem to help promote a homeless organisation, Focus Homeless Outreach based in Camden – “for those who are marginalised and have no voice”.

When I told her I had had no chance to pick up her book Emerald, she insisted on delivering it to the office yesterday afternoon as she lived so near. I glanced at one poem – Removal Men – and knew I would have to sink myself into the book later.

Here are the first two stanzas:

All day I watch our lives go into the van.
When my brother has got my mother away with the plants
they carry out the kitchen table          armchairs
and the mad bronze over-size speakers

sixty years of listening to Carol from Kings
in a hot kitchen on Christmas Eve.
I unscrew the letter casket
flanking the front door.