Passing on the baton

As Camden Choir prepares to celebrate its 50th anniversary, Michael White talks to its founder Julian Williamson, who’s calling it a day 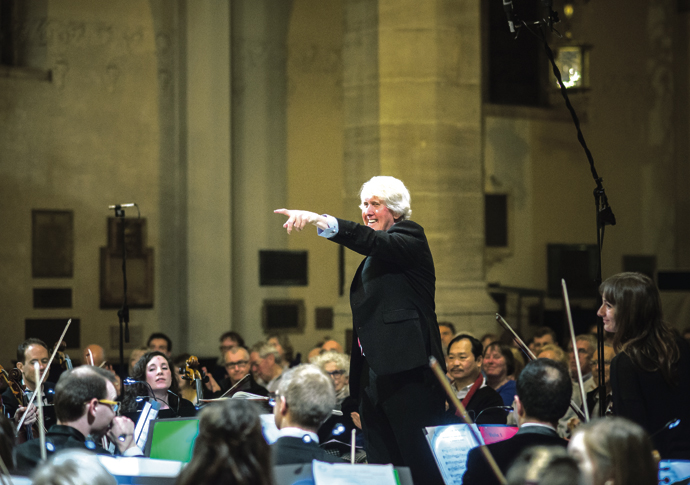 AMONG the many casualties of Covid during the past 18 months has been the world of choral singing. And don’t think this was a minor casualty. Far from it.

Choirs may not make news in normal times, but they’re the life and blood of countless amateur musicians. And when Boris Johnson forced them into silence, the importance of collective singing suddenly became a talking point. Not least in London where ensembles like the Camden Choir were facing meltdown.

Happily the Camden Choir is back in business (some are not). And none too soon, because there are two major landmarks pending in its history that it wants to sing about.

One is its 50th anniversary coming up this autumn. But the other is more poignant: the retirement of the man who launched the choir all those decades ago, in 1971, and has conducted every concert since – Julian Williamson.

He tells me that his going was, at least in part, determined by the recent lockdowns. “We weren’t able to do anything, our concerts were all cancelled, so I thought this might be a good time for the choir to find someone to replace me and settle into a new regime. I’m sad to be leaving, but I’m 79, you can’t go on for ever. And it’s best to step down before people start asking you to, isn’t it?”

Well, yes. But Williamson will be a seriously hard act to follow. After so long on the podium, he’s become an institution – though in truth his choir had claims to being something of the sort from its beginnings as a vocal evening class run by the ILEA at the Camden Institute.

“I’d just left Trinity College of Music”, says Williamson, “where I’d studied piano and conducting, and I needed a job; so I applied to the ILEA and they engaged me to create the choir. That was late in 1971. We gave our first concert early in 1972. And it went on from there.”

Rehearsing every Monday night, as it still does, the choir grew to a size of 70/80 voices – joining up with other groups for bigger repertoire. And by the 1980s it was playing major venues like the Barbican and Southbank. Money problems in the 1990s brought that to an end, with concert venues getting smaller and more local: usually St Mary’s Primrose Hill or Hampstead Parish Church. But the ambitions of the choir remained as always.

“One thing people got to know us for”, says Williamson, “was the uncommonly wide range of what we sang. We did the Mozart Requiems and so on that are standard to the choral repertoire, but not so often. There were lots of things that weren’t remotely standard. And especially contemporary music – by composers like John Gardner, David Fanshawe, Iain Hamilton, because I liked the challenge.”

Sometimes, he admits, the challenge wasn’t so enthusiastically adopted by his singers: “I remember in particular a piece by Alun Hoddinott that went down badly. And we often commissioned brand new pieces that, of their nature, were a leap in the dark. But you get to know composers, you get a feel for how they write. And we’ve made good relationships in that way through the years, with people like Richard Blackford who is writing a new piece for what will be the choir’s official 50th anniversary concert next spring.”

That concert will be conducted by Williamson’s successor Iestyn Evans, director of music at the Marylebone Church of St James, Spanish Place, and someone who already has links with Camden Choir as an accompanying organist. So the transition should be smooth – in much the way as the choir’s turnover of singers has been, through the years.

“Choirs in London always have more shifting personnel than choirs elsewhere,” says Williamson, “because in London people are continually coming and going. But Camden Choir has been relatively stable; and there are still a few singers who’ve been with the choir the entire time, all 50 years. We’ve even managed to deal with the classic choir problem of maintaining a reasonable number of tenors. That’s not easy, they’re a rarity. But we’ve never had none, which is more than some choirs could say.”

Keeping singers is the hallmark of a good conductor. The dilemma when you run a choir is that you want the standard to be high, which calls for discipline; but if you’re over-strict, your singers won’t enjoy rehearsing, and they’ll leave.

“People in choirs are amateurs,” says Williamson. “Nobody pays them to be there – on the contrary, they pay for the privilege – and they’re doing this in their spare time because it gives them pleasure.

“But it also gives pleasure to do a good concert, and achieving that means you sometimes have to be firm. The ideal is to impose your personality in a pleasant way – or that’s what I’ve always tried to do. I get cross, but not often.”

As a natural repository of wisdom about choir-conducting, having done it for so long, you might think one of Julian Williamson’s retirement occupations would be teaching it. But no.

“I lecture about music generally but don’t think I could teach conducting. It depends too much on instinct. You essentially learn by doing it.”

Another thing he won’t be taking on is the activity he’s spent the past half century inspiring others to do. Sing.

“I’ve never had much of a voice myself. When I was studying at college I did have some lessons, but the professor told me I sounded like a cow baying at the moon. It wasn’t encouraging.”

• Camden Choir’s next concert will be Saturday, November 20 at St Mary’s Primrose Hill. The 50th anniversary concert with the Blackford premiere will be Sunday, March 20 2022 at Cadogan Hall. For details visit: camdenchoir.london