Once again, it’s DIY detective work which gets stolen bike back 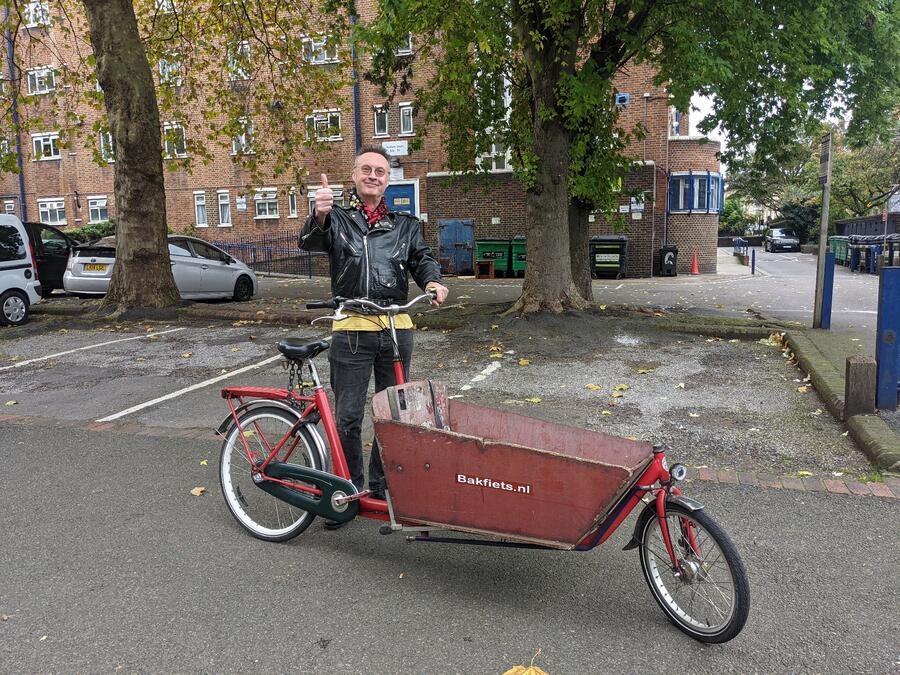 Ben Watson with the retrieved bike

A DETERMINED duo have got their family’s prized bike back after some online sleuthing.

Esther Leslie and her partner Ben Watson had their cargo bike stolen in early October. They were devastated as they had used it to transport their children to school and Mr Watson, a musician, used it to take his instruments to gigs.

The couple contacted the New Journal for help as part of our series on bike crime and our investigation into the response cyclists are likely to get if theirs is stolen.

In July, we tracked down a bike stolen from Camden Town and confronted an online seller after police suggested there was only a limited chance to retrieve it.

Ms Leslie said: “The CNJ did keep hope up. It really felt that it was possible to find things again because these are fairly low level criminals, and also that there were eyes and ears out there.”

After they noticed the bike was missing, Ms Leslie started searching social media sites for the bike, which is red and has a distinctive wheelbarrow-style attachment on the front.

Ms Leslie said: “It wasn’t on Facebook Marketplace, but I put up a picture saying ‘not selling this, it’s been stolen’. “Someone immediately contacted me saying ‘give me your number, I have information’ – and then I kept getting weird messages saying things like ‘contact Cyber Fred, he can give you info’.”

She did not respond to any of the messages because they appeared so suspicious, adding: “It seemed like a scam. They were offering me their ‘tracker services’ which I think I would have had to pay for.”

But she eventually decided to reply to a particular message. “This one man messaged – he had Corbyn in his profile picture and so I thought he was probably all right – and he said he had information,” she said. “But then we didn’t hear anything for two weeks.”

As the weeks went by, Ms Leslie began to lose hope, but then the man called her.

She said: “He said he had the bike and was going to drop it at Bethnal Green Police Station.”

Then she got another call from a woman, claiming to be a police officer.

Ms Leslie said: “She didn’t sound like a police officer, she kept asking me weird questions, and then she insisted I meet her and the man in a park where they had the bike. I refused, so she said they would drop it into the police station.”  Mr Watson went to the station to ask if the bike had been brought in and after two weeks of back and forth the police confirmed they had it, and handed it over.

Mr Watson said: “I got the bike back, that’s the amazing thing, but it was all delayed and complicated.”

When it was finally released, he said: “I cycled back joyously. I stopped to buy a salmon, and then there was a bagel shop, so I got 12. That’s the joy of bikes. You can get bagels from Brick Lane and then cycle home on a Saturday morning.”

A spokesperson for the Met said: “The Metropolitan Police Service takes every incident of bicycle theft seriously and recognises the distress this crime causes its victims.

“We are also aware that for many, this can be a main form of transport and can therefore greatly disrupt their everyday lives. When a report is received officers will carry out every reasonable line of enquiry to recover the property and bring any suspect to justice.”