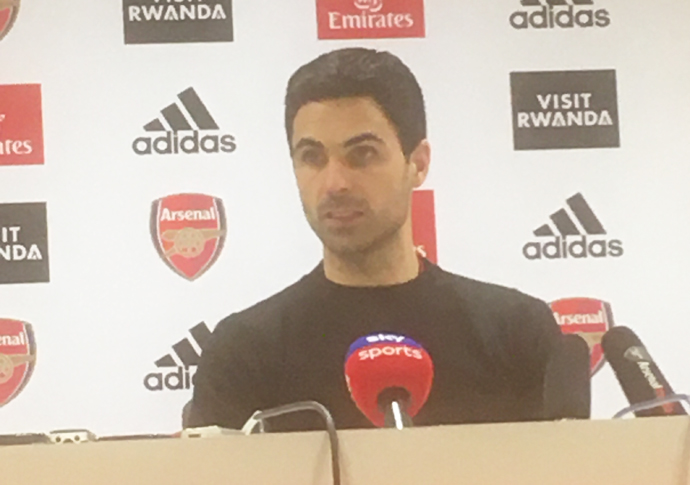 Mikel Arteta ‘is isolating in line with Government guidelines’

MIKEL Arteta will miss Arsenal’s match against Manchester City on New Year’s Day after testing positive for Covid-19 for a second time.

The Gunners’ manager previously contracted the virus in March 2020, prompting the shutdown of football.

In a brief statement yesterday (Wednesday) the club said that Arteta “is isolating in line with Government guidelines”, and will therefore not be on the touchline for the game against City at the Emirates Stadium.

The news is a setback for Arsenal, who go into the match against the Premier League leaders in a rich vein of form.

They further cemented their place in the top-four on Boxing Day after thumping Norwich 5-0 to record their fifth win on the bounce in all competitions.

Arteta has previously spoken of needing “a plan B, C and D” while tackling a world in which games can be called off at a moment’s notice because of Covid.

And speaking after the victory at Norwich, the Spaniard added: “It’s a long, long season and a lot of unpredictable things probably are going to happen.”

Despite being sidelined, however, Arteta will still be demanding “much more” from his young players in 2022.

A run of wins has put Arsenal in contention for a Champions League place next season. They are currently fourth, four points ahead of fifth-placed West Ham.

Other chasing teams like Manchester United and Tottenham have games in hand and will be expected to close the gap, which is why Arteta is urging his charges to “keep on improving”.

He added: “Against Norwich we played some really good football. We won the game, and we competed really well, but there’s still a lot of things that we have to do much better.

“We have a lot of room for improvement and I’m focused on that – maintaining the things that we do so well now, that are giving us results and consistency, and then trying to improve the rest.

“The results will come. We want to continue improving and playing better and better and then let’s see where we get.

“I insist the better that we play, the better that we understand the spaces, and how we have to attack: the movement, the timing, the cohesion and the execution – it all becomes better because you get in a much better position when you enter the final third.

“When that happens, and you have a clear idea of how to attack those situations, goals or goal-situations will come. Then it will come down to the effectiveness of the players in their decision making.”