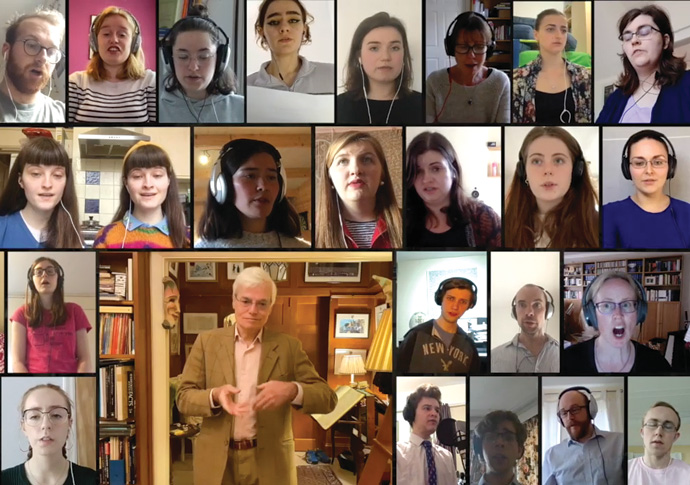 Ralph Allwood and the Rodolfus choir at virtual evensong

HIGH on the list of missing pleasures for a lot of people during lockdown is church music – which has powers to pacify a housebound mind whether or not it’s one that usually goes to church.

The calm of choral evensong is better therapy than most things that psychiatrists prescribe. And though the choirs that sing it are non-functioning right now, you can still get a daily fix from St John’s College, Cambridge, where the famous chapel is doing its best to maintain a virtual, online life for however long we all stay isolated.

Visit the website, www.joh.cam.ac.uk/chapel-choir, and you’ll find a lot of interesting things. But chief among them is a virtual choral evensong that streams every day at 6.30pm using sung material from the choir’s archive of past recordings.

Few places do it better. And for many listeners it will offer solace in tough times.

• But for a different, one-off and spectacular approach to choral evensong, there’s one that’s coming up on Tuesday that will be like nothing else you’ve ever heard.

It’s the idea of the well-known choral conductor, former director of music at Eton and, for a short while, Hampstead Parish Church, Ralph Allwood, who has put together a virtual choir from nearly a thousand online submissions across the entire globe.

The lessons will be read by Stephen Fry and Simon Russell Beale. There will be prayers from the Rev Richard Coles. And above all there will be choral music, in copious quantities, sung by an awful lot of voices.

As Allwood says: “Choral evensong is one of England’s greatest inventions, and I’m touched by the range of singers – some of them highly experienced professionals, some of them young choristers, some of them families singing together – who have contributed to this project.

I’ve had wonderful letters from people telling me how taking part has brought them joy during a lonely lockdown. It’s taken a month to put everything together.

But we all so miss the combination of beautiful music in beautiful buildings that I’m sure the result will give as much pleasure to the people who listen as it has to the people involved.”

The event itself will stream on the foundation’s YouTube site at 6.30pm, on Tuesday (available thereafter on demand). And donations are invited to the Cathedral Choirs Emergency fund, to support choirs that might otherwise not survive the Covid shutdown.

Friday brings the Suffolk-coastal epic that established Benjamin Britten as one of the world’s great stage composers, Peter Grimes.

And Saturday is a 1982 production of Lucia di Lammermoor with Joan Sutherland reprising the role that made her a household name.