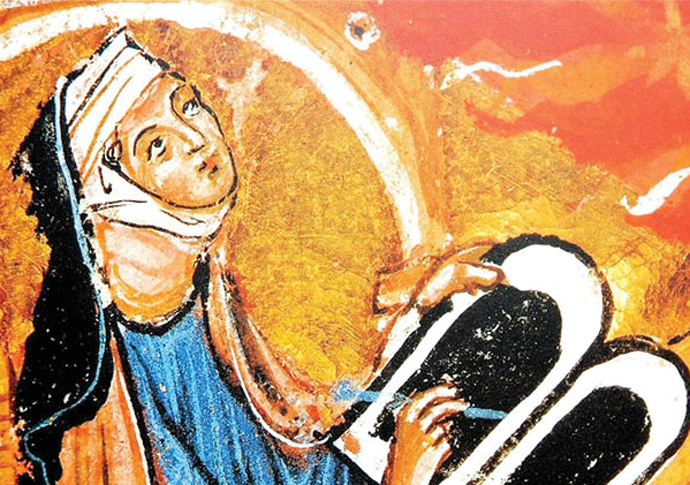 WHAT’S the top of your to-do list when you move house? Fix the roof, sort out the damp under the stairs? Well, not for Michelle Berriedale-Johnson who moved into Highgate not so long ago with a list headed “Organise a concert series”.

It was the reason why she bought the house in the first place, a fine but slightly crumbling Victorian. And her Salon Music series launches this weekend – not in the house, which is still overrun by builders, but in Highgate School Chapel which is probably better suited to a first concert involving voices and based around the luminous, ethereal sound-world of the saintly Hildegard of Bingen.

Hildegard was a 12th-century German nun, the abbess of a Benedictine abbey. But she was also a visionary, a scientist, a philosopher who corresponded with the finest minds in Europe, and a composer whose music – written for the female voices of her fellow nuns – survives as sonic balm to modern ears.

At Highgate School this Saturday it’s sung by the all-female vocal consort called Voice, alongside other medieval works. Start-time is 6.30pm. And there could hardly be a more atmospheric opening to this new Salon Music project. Watch out for new developments when the builders down tools. Details: salonmusic.co.uk

• Also opening in Highgate this week is a new production of Mozart’s Marriage of Figaro by Hampstead Garden Opera: the company that gives a platform to young singers straight from college and eager to show the world what they can do. Conducted by Thomas Payne and directed by Julia Mintzer (the team responsible for HGO’s memorable opera-air Savitri during lockdown), it plays Jackson’s Lane Theatre, N6, Friday 5 to Sun 14. Booking: jacksonslane.org.uk

• English National Opera’s new HMS Pinafore turns out to be not quite so much fun as I hoped it would be on this page last week. Cal McCrystal, the director, did a brilliant Iolanthe for ENO a couple of years ago, but his latest stab at Gilbert & Sullivan doesn’t shine so brightly. The set is a joy, there’s some good singing, and a few good jokes (though not enough to fill an evening). But casting TV game-show host Les Dennis in the lead role is disastrous: he can’t do it, and the show falls flat as a result. If you’re a fan of G&S (or Family Fortunes in the 1990s) and still want to see it, the run continues to Dec 11. eno.org

• The 2021 Gramophone Awards were a modest affair, for reasons that need no explanation, but they produced a good result in naming the wonderful Canadian violinist James Ehnes Artist of the Year. And if you want to know what makes him so wonderful, be at Wigmore Hall on Nov 11 when he appears in recital playing Brahms and Schumann: two composers so historically connected it’s hard not to believe that the latter (older and more established) wasn’t just a bit in love with the former (a dazzling young adonis when they met). If you can’t be there, it’s being broadcast on the Wigmore website: very much worth watching. wigmore-hall.org.uk

• Another eminent figure passing through London this week is celebrated period-performance conductor Philippe Herreweghe, who directs a student account of Bach’s St John Passion this Sunday morning, 11.30am, at the Royal Academy of Music, NW1. Tickets: ram.ac.uk. And if choral music is your thing, there’s a part-performance of Handel’s Messiah at St Mary’s Primrose Hill NW3 on Sat 6 in aid of the C4WS Homeless project that runs shelters in Camden – with a live webcast if you prefer to watch from home. Details: londonclassicalchoir.com

The road scheme here should be dubbed Amwell Soulless Streets!
From the Islington Tribune

The pro-traffic lobby arguments are flawed
From the Islington Tribune

The cycling lobby should not shirk its responsibilities