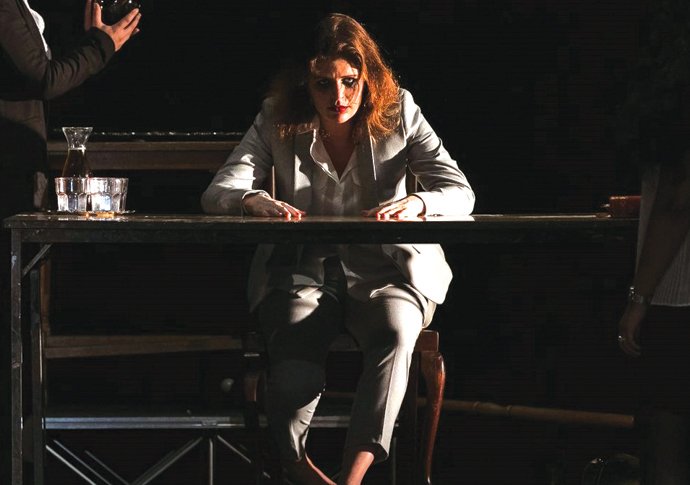 GRIMEBORN Opera was a name that started as a joke (think Glyndebourne Opera but in gritty Dalston rather than the lush South Downs) which passing time has transformed into something much more: serious, substantial, capable of putting on events like the jaw-dropping production of Wagner’s Die Walkure that ran at Hackney Empire the other week.
Apart from playing on a cut-down scale, it was a show that could have graced a major international opera house: well-sung, well-staged, and brilliantly conducted. So with that auspicious opening, I can heartily commend the next thing in the season – which is a production of Handel’s Alcina done by the visiting Ensemble OrQuesta, whose work I’ve seen before and thought impressive.

An exotic fairytale of sorcery and captive love, Alcina is one of those baroque operas with a long, elaborate plot but stunning music if you’re prepared to give it time. This new production runs August 25-29 – not at Hackney Empire but at Grimeborn’s home base which is the new, “Outside” venue at Arcola Theatre, Dalston – specially designed for Covid to give shelter with fresh air. Details: arcolatheatre.com/grimeborn

• For even more fresh air, try Music at the Tower – the open gathering in a Hornsey churchyard set up last year by super-fabulous soprano Mary Bevan and back in business this Saturday (August 21) for a Bach extravaganza that starts 2pm and runs on until sunset.

Deal is you turn up (preferably with picnic and your own chairs), make a meaningful donation (there’s no fixed charge), and settle into a festive marathon that embraces all Bach’s Brandenburg Concertos, baroque dancing, and choral singing – led by an aristocracy of period performance stars like Trevor Pinnock, Emma Kirkby, Christian Curnyn, Laurence Cummings… with TV’s favourite choir-conductor Gareth Malone as icing on the cake. It can only be amazing and go down in history as one of those “Yes, I was there” events. Easily accessed from Hornsey station. Details: musicatthetower.com

• Meanwhile, the Proms continue at the Albert Hall, with a big night this Sunday (August 22) when Simon Rattle conducts the LSO in three symphonic scores by Stravinsky, marking the 50th anniversary of the great composer’s death. When Rattle first took charge of the LSO, he announced his arrival with a Stravinsky celebration. It’s a repertoire he does well, and this Prom should stand out as a must-hear.

As is one of this year’s chamber Proms happening at Cadogan Hall on Monday (August 2): a concert for the centenary of Astor Piazzolla with guitarist-of-the-moment (and I’m sure a good few moments to come, because he’s enduringly wonderful) Sean Shibe. For good measure, there’s more Piazzolla on Wednesday (August 25) when the Academy of St Martins and star violinist Joshua Bell bring to the Albert Hall his music for the Four Seasons alongside that of Vivaldi. All Proms are broadcast live on Radio 3. Details: bbc.co.uk/proms

• Finally, for anybody into Broadway (and I don’t mean Ealing), there are two classics playing London right now: Anything Goes at the Barbican (running to October 31, barbican.org.uk) and Carousel at the Open Air, Regent’s Park (running to September 25, openairtheatre.com). Anything Goes I haven’t seen yet. Carousel I have, and was unconvinced by a production concept that shifts the action from East Coast America to somewhere north of Coronation Street: it doesn’t work. But there’s an energy onstage, and enough good songs to keep you in your seat when it rains. As it unfortunately tends to.

Happy snaps! Photo club is ‘positive side of social media’ after LTN abuse