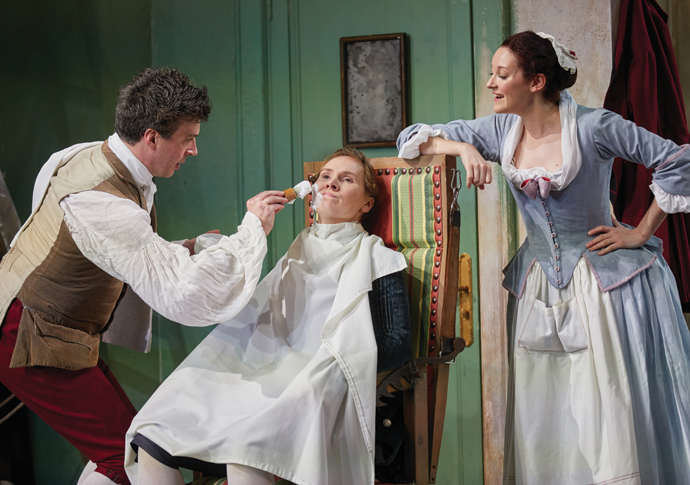 TWO weeks into quarantine, you’ve cleaned the oven, fixed the cupboard door and taken up macramé. What next? Well, there’s always opera.

If you’ve never tried it, now’s the moment. And if you’re an opera regular in mourning for the country-house productions you were booked to see but won’t, because they’ve all been cancelled, here’s some consolation.

Garsington, which won’t be functioning this year, has put online its joyous 2017 production of Mozart’s Marriage of Figaro – directed by the veteran John Cox and with the consummately accomplished bass Joshua Bloom in the title role.

It’s accessible any time until September, free, at youtube.com/GarsingtonOpera

You can also get a pre-performance talk with Cox and the conductor Douglas Boyd. And an added bonus is that every Monday morning Garsington is posting a motivational 20 minutes of music and movement – a sort of online rehearsal room workout for the housebound – to try and raise our spirits for the start of the week.

The one that went up last Monday (still available to watch) has Joshua Bloom singing in his kitchen. From the quality of fitments you can see that his career is flourishing.

Meanwhile, as I mentioned last week, the New York Met continues to roll out a free-access online opera every day, available for 23 hours from 12.30am until 11.30pm UK time at metopera.org, and packed with the glittering casts that only the Met can afford.

If the high anxieties of opera, though, aren’t what you need right now, there are more intimate and soothing offerings from the celebrated Academy of Ancient Music. Every Sunday afternoon at 3pm the AAM is posting online a complete filmed concert from its recent archives.

And this Sunday has the cool, calm but still somehow charismatic lutenist Thomas Dunford leading the band in Vivaldi, Bach and Buxtehude.

The concerts stay online at youtube.com/acadofancientmusic, so you can see them on demand. And one I recommend is a performance the AAM gave in Cambridge only last month when it was joined by the soprano Mary Bevan for a bout of Handel heroines.

Not so soothing, because Handel’s heroines get terribly distraught, it’s gorgeous music all the same. And a reminder that there were such things as concerts just a month ago. It feels like an eternity.