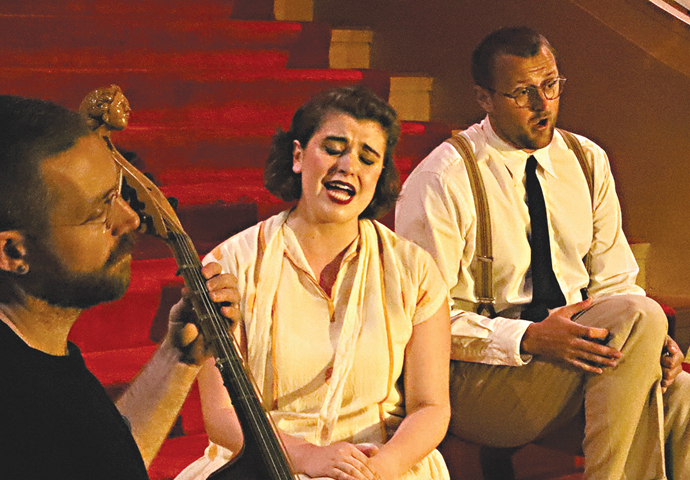 From the premiere of Dear Marie Stopes at the Wellcome Collection. Photo: Claire Shovelton

WHEN it comes to writing operas these days, nothing is off-limits. The time-honoured formulas of thwarted love have opened out. And an example is the chamber opera playing this weekend (Saturday September 21) at Kings Place, called Dear Marie Stopes.

Stopes was a pioneer of sexual health education, writing and disseminating literature that in her time – the first half of the 20th century – was revolutionary. Her celebrated manual Married Love was scandalous but widely read. And this new opera, by composer Alex Mills, is based on letters she received from grateful readers: mostly women who, until they found her book, im­agined they were the only people in the world who had the sexual problems listed in its pages.

Mills’ opera premiered last year in the appropriately medical circumstances of the Wellcome Collection. This is its second outing, in a more conventional theatre space. And apart from the subject matter, there’s one very odd – perhaps perverse – thing in its content: the main character of Marie Stopes herself is written for a man. A countertenor.

Called on to defend this questionable piece of casting, Mills says that he did it partly to provide vocal variety, because otherwise the singers would have been entirely female, but also because much of Stopes’s work concerned the exploration and questioning of gender stereo­types. So, as he puts it, “having a male presence sing a female role lifts the lid on these ideas, opening up new layers of interpretation”.

Whether you’re convinced by that is up to you. But by tradition opera regularly plays with gender (think of Mozart’s Cherubino, or those butch Handelian trouser-roles assumed by women). So you only need a slight mental adjustment here to deal with Mills’ gender-bending.