It’s Black History Month and there’s a wonderful selection of theatre and books on offer.

• Do try and catch Winsome Pinnock’s Rockets and Blue Lights at the Dorfman, National Theatre before it closes on Oct 9. nationaltheatre.org.uk

• Curious, written and performed by Jasmine Lee-Jones, is at Soho Theatre until Oct 16. Jaz is in her second year at drama school and tired of performing. When she stumbles across a piece of forgotten history, her life is changed forever. sohotheatre.com/

• At Camden People’s Theatre, Essentially Black by Naomi Denny follows Jess and Lydia, two black students at Oxford University trying to be heard. Jess is leading a campaign to get a statue of Cecil Rhodes removed from campus. Lydia is trying to challenge and decolonise the curriculum they are taught. 7.30pm, Sun Oct 17. cptheatre.co.uk

• At Park Theatre, Talawa Theatre Company presents the world premiere of A Place for We, a bittersweet comedy by Archie Maddocks, directed by Michael Buffong. In Brixton, Trinidadian funeral director Clarence and fifth generation pub owner George are trying to resist change. Do they adapt to survive or stay true to their roots? Until Nov 6. parktheatre.co.uk

• In Park90, Sold by Amantha Edmea, directed by Euton Daley, is a true story told through theatre, song, live drumming and dance, inspired by the storytelling traditions of the West African griot. Born into slavery in the British colony of Bermuda, Mary Prince went on to become a champion of freedom. Mary’s book about the harsh realities of enslavement, what it meant to be separated from family, to be bought and sold, had an electrifying effect on the abolitionist movement, helping to free many Africans in bondage. From Oct 18-Nov 6. parktheatre.co.uk

• White Noise by Suzan-Lori Parks, at Bridge Theatre, explores the fallout after 30-something Leo is assaulted by the police in a racially motivated incident. Until Nov 13. bridgetheatre.co.uk/ 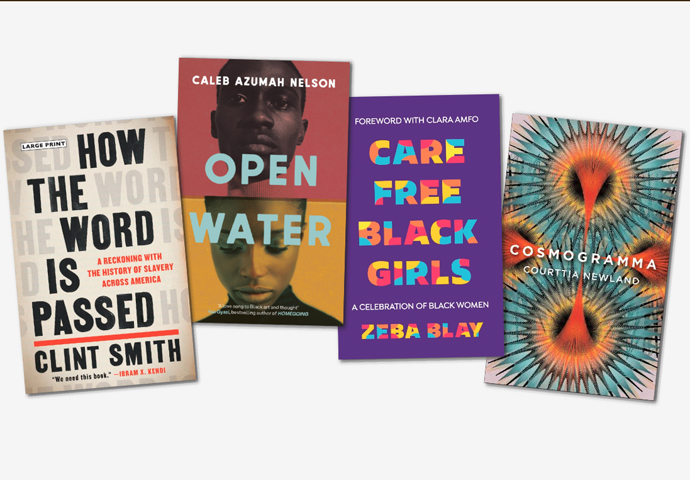 • How the Word is Passed (Dialogue Books) by Clint Smith leads the reader on an unforgettable tour of monuments and landmarks and offers an intergenerational story of how slavery has shaped America’s collective history.

• Caleb Azumah Nelson’s debut novel, Open Water (Viking), explores black masculinity and what it means to be vulnerable when you are expected to be strong.

• Published this month, look out for Carefree Black Girls (Square Peg, Oct 21) a collection of essays by Zeba Blay celebrating the achievements of influential black women in Pop Culture – writers, artists, actresses, dancers, hip-hop stars – while examining the stereotypes and rigid identities that have clung to them.

• And Courttia Newland’s Cosmogramma (Canongate, Oct 28), speculative fiction shorts in which he envisages an alternate future as lived by the African diaspora.