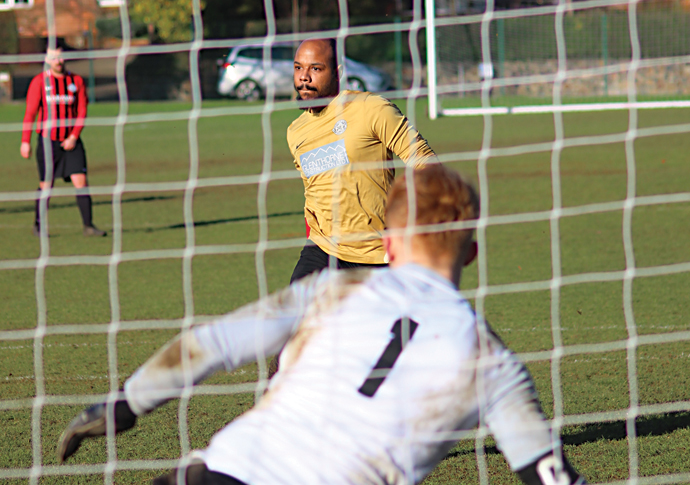 GOALKEEPER Graham Loki had a hand – and a foot – in a cup classic on Sunday as he helped Highgate Albion Reserves overcame AFC Oakwood on penalties.

The shot-stopper made several key saves during the Middlesex Cup clash at St Aloysius Sports Ground in Highgate. But his heroics didn’t stop there, as he also saved two penalties in a nail-biting shootout before converting a spot kick of his own to guide Albion into the quarter-finals.

“It really helps to have a goalkeeper that’s in the form Loki is in at the minute,” beamed Albion manager John Eager after the final whistle. “He’s producing some unreal stuff.

“To save two penalties to keep us in the game, and then still have the composure to score one himself is something special. He’s a really great player to have in the squad.”

Albion displayed tremendous team spirit to battle back after going a goal down late in the first half. Winger Zeby Cole levelled the scores on the stroke of half time when he collected a pass from Shane McNamara on the edge of the box and coolly slotted home.

A moment of magic then looked to have won it for Albion as Moses Barnett got on the end of another good cross from McNamara and drilled a shot into the back of the net to make it 2-1.

However, “a lapse in concentration” in the final minutes of the match allowed Oakwood to draw level and take the game to a penalties.

Albion were fearing the worst when James Pavely skied the first penalty over the bar. Barnett clinically scored his spot kick, but when Daniel Glaude missed Albion’s third the tie was heading in Oakwood’s favour. But Loki turned the tide as he made two crucial saves before showing his team-mates how it’s done by smashing his own penalty into the back of the net.

Alan Callaghan, John McNamara and Tre Thompson all went on to convert their penalties as Albion won the sudden-death showdown 5-4, and with it a place in the last-eight of the cup.

Eager added: “We put in a great team performance and really dug deep to get the win against very good opposition.

“We’re delighted to keep up our winning run. We’ve played our part in some dramatic games this season, and thanks to Loki’s man-of-the-match display this one ended in our favour.”

Albion face another big fixture this weekend when they take on rivals Anatolians away in the second division of the Barnet Sunday League.