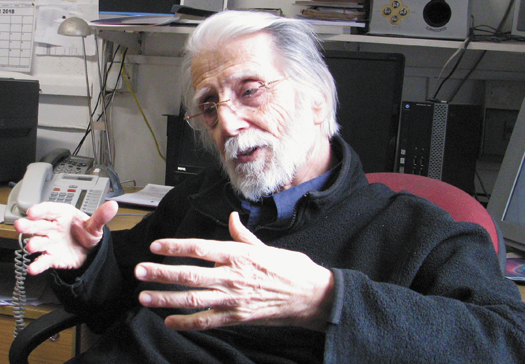 TO survive as an indy theatre for 60 years makes Theatro Technis in Camden Town one for the history books.

And no doubt it has survived because of the guiding light behind it – a remarkable thespian and a man very much of the theatre, George Eugeniou, who, well into his eighties, still continues to go to the theatre in Crowndale Road every day.

Now he is preparing for the theatre’s diamond jubilee with a programme that includes the staging of an ancient Greek play, experimental theatre from Bulgaria and the music of Paul Robeson.

Set up in 1957 in a garage before moving eventually to its present site, it worked closely with the large Cypriot community, many of whom had been forced to flee their insurrection embattled country. It provided such facilities as an advisory service and a luncheon club for the refugees.

But it was its links with Cyprus that oddly got it into trouble over – of all things – the flying of the Cypriot flag. Our worthies at the Town Hall took exception – and, controversially, its council grant was removed.

For the last decade or so Theatro Technis has valiantly ploughed on alone, staging its unique mix of classic drama and new writing by renting out its office and performance space.

But having battled with the high and mighty for decades, Eugeniou, who in his younger days starred in the Powell and Pressburger films Ill Met by Moonlight and Peeping Tom, is staging Oedipus at Colonus by his beloved Sophocles as part of the theatre’s jubilee festival. It opens on bank holiday Monday with a double bill of Tayo Aluko’s one-man shows, Call Mr Robeson and Just an Ordinary Lawyer.