London’s record shops – especially those on our patch – have a special place in music lovers’ hearts. Many are still around but can they survive downloads? 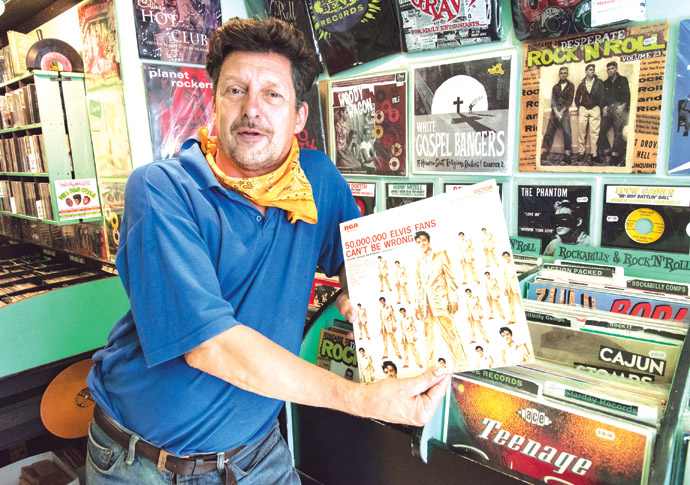 Nick Martin of Sounds That Swing

THE rising sales of vinyl – lauded as a success story as new music lovers discover the joys of playing a record – remains but a blip, according to Out On The Floor’s owner Jake Travis.

Jake, who runs the celebrated record shop in Inverness Street, Camden Town, says that while custom for a time had flatlined, the supposed revival has yet to get anywhere near the format’s heyday.

Jake features in a new book by writer Garth Cartwright and photographer Quintina Valero that charts the life and times of London’s record stores. The pair had interviewed and photographed the stalwarts that remain after two decades of closures – and Jake reveals the secret of his shop’s success.

“Things have improved in the last few years due to the vinyl revival,” he says. “Our customer demographic has changed from predominantly middle-aged men to a younger, mixed crowd, which is great. But don’t believe the hype, the vast percentage get their music online.

“That said, we are niche – and niche is often able to survive when other businesses go down.”

As Garth and Quintina traversed the city to chronicle London’s remaining stores, he recalls moving to London in 1991 with a sense of awe.

“On Berwick Street and the streets immediately off it, there were up to 24 independent shops operating. Camden Town, Brixton and Ladbroke Grove also offered a smorgasbord of shops to sift through.”

He says the range of stores was a reflection of London culture.

He described the years of shellac 78s and gramophones, through to a 1960s boom.

“Londoners opened emporiums offering many different genres alongside a real hunger to get new sounds heard,” he writes. “No other city had the record shop mash-up of pop and rock, Jamaican and Indian, Turkish and Greek, Jewish and jazz, punk and techno, which would take fabulously unruly shape across the Smoke.”

And the city’s melting pot has made the offering diverse.

“Being home to people from across the globe ensures the UK’s capital serves as a laboratory for sonic experiments,” writes Garth. 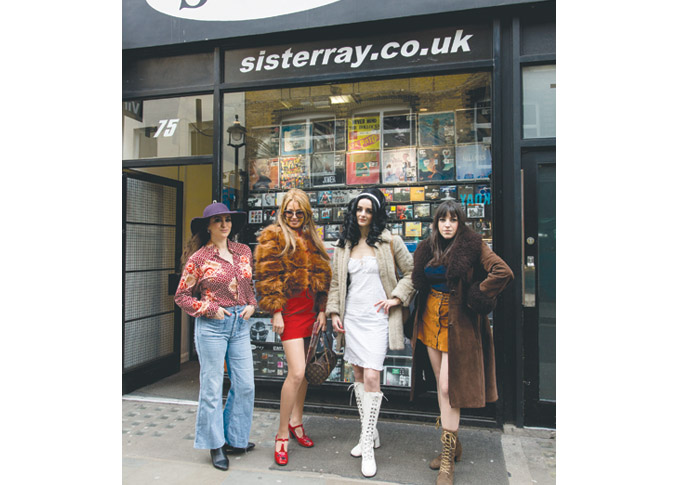 As the pair cast their eyes over the changing landscape of Camden Town’s record stores, they note how the area has been a victim of its own success.

“Once upon a time, the market offered nooks and crannies packed with fascinating traders,” he writes. “I would head for record stalls: there was a Japanese bloke who dealt in reggae 45s, an English bloke with suitcases full of vintage – yet mint – Brazilian LPs, a surly guy who sold an astonishing array of African LPs, while a young woman offered up punk and goth records.”

But Britpop made Camden overheat, rents soared, putting the indies out of business.

The early history of Camden’s record shops goes hand in hand with the bicycle trade: “Selingers on Camden High Street boasted on its 78 sleeves ‘The Brilliant Incandescent and Cycle Accessories Supply Stores.’ Camden, being a working class area, had plenty of bicycle shops and many would have sold 78s alongside cycle accessories, as was de rigueur then,” he writes.

He describes Kay’s Irish Music Centre, in Arlington Road, which sold work by Irish entertainers. Kay’s had a loyal, local customer base, and were frequented by The Pogues.

Then there was Ted Carroll, who ran the Ace label, and opened Rock On, next to the tube, in 1975.

“It was in the right place at the right time – Camden had Dingwalls, a venue booking the kind of band that loved Rock On, alongside old Irish ballrooms then being transformed into music venues,” says Garth. “Today, a handful of record shops remain and continue to represent Camden’s raucous spirit.”

He cites the owners of Parkway’s Sounds That Swing as saying the thing that kept them going was “dedication and stupidity”.

“I feel running a specialist record shop means engaging with people in a positive way,” owner Neil Scott says. “You didn’t make much money, but if you love music then you feel happy about going into work each day.”

Garth uncovers the story behind the growth – and decline – of the business in the West End. He notes how department stores would have a gramophone section equipped with listening rooms. Imhofs, on New Oxford Street, opened in 1883 and sold wax cylinder playing phonographs.

“Even in the 19690s, Imhofs Record Bar was noted for its US imports and deep stock,” he adds.

By the mid 20th century, record shops were well established – and Garth quotes the memories of record buyer Ronald Hastings, shared in Gramophone magazine in 1986.

“In 1940, my regular record-gathering programme commenced with the purchase of a 1/6 return workman’s ticket.

“Then there followed a day of record listening before returning with, usually, two new discs, carefully chosen after hearing as many as I thought I could get away with, and still be welcome in the same shops the following week.”

We track the post-war scene, hearing of Laurie Kreiger, who ran Harlequin Records, and opened the first Berwick Street shop in 1961. Others followed, turning Soho into the centre of London’s record trade, which in the 80s and 90s enjoyed a golden age.

And the fact record sellers have specialist knowledge and a love for what they do bodes well.

Garth adds: “What marks record shops today are independent traders, both established and newbies, who ‘curate’ the music they stock to ensure those who come to browse find all kinds of treasures.”