Eye on the past

In the latest in his series on eminent Camden Victorians, Neil Titley considers the diplomat and satirist Henry Labouchere 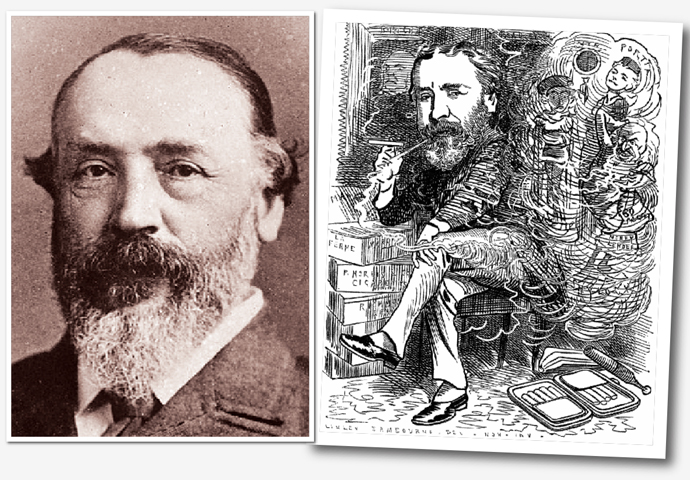 IF Ian Hislop of Have I Got News for You fame has a Victorian original then it would have to be the writer, politician, diplomat, and theatre promoter Henry Labouchère (1831-1912).

Labouchère was also the owner and editor of The Truth, a weekly satirical journal that strongly resembled Hislop’s Private Eye and which was sued for libel almost as often. Fortunately its proprietor was a man who had inherited enough wealth to stand up to his opponents. With little ambition and no personal axe to grind, he became a genuine champion of the underdog.

Wilfred Blunt once said: ‘‘There must be a few lovers of liberty left in England but for the moment they have no voice more powerful than Labouchère’s”.

One of his targets was the monarchy, which he claimed was too expensive. He characterised the regally linked commander of the British army, the Duke of Cambridge, as “standing at the head of the troops with his drawn salary in his hand”.

Queen Victoria was so insulted by his assaults that when eventually Labouchère was offered a Cabinet position, she vetoed his appointment.

When after some boisterous undergraduate years he had been sent down from Cambridge without a degree, his family decided that a spell abroad might give Labouchère a greater sense of maturity. He arrived in Mexico City in 1852 where, having gambled away his travel allowance and falling in love with a circus girl, he gained a job as an acrobat in her circus. Dressed in pink tights, he was billed as “The Bounding Buck of Babylon”.

Losing both the girl and the job, he moved on to the USA, where he took to living with a tribe of Chippewa Indians in Minnesota.

His family, meanwhile, had been pulling strings on his behalf and Labouchère was surprised to find that he had been appointed junior attaché to the Washington Embassy. He turned out to be a very unconventional diplomat indeed. He found that if the British wished to interfere in Central America, it was customary to arrange a commercial treaty with the state concerned. Therefore he unearthed a bedraggled barfly known as the “King of Mosquito” who in return for a bottle of whisky would sign any treaty the British wanted. This document then would be solemnly handed to the Americans as a bona fide excuse for intervention.

In 1855, Labouchere arrived at the British Legation in St Petersburg, Russia. He discovered that the husband of his laundress was a compositor at the Russian government printing office and therefore had access to the Cabinet minutes. Seducing the laundress with sex and money, he was able to provide information of astounding quality back to the British Foreign Office.

However, when the British foreign secretary Lord John Russell discovered how the reports were obtained, he ordered Labouchère to stop immediately. Labouchère was amazed: “What on earth does Russell imagine diplomacy was invented for?”

One morning a pompous Russian nobleman arrived at the St Petersburg Legation, stating that he wished to see the ambassador immediately.

Labouchère replied: “Please take a seat. His Excellency will be here shortly.”

The nobleman considered this to be too offhand and barked: “Young man, do you know who I am?” and recited a list of his titles.

Labouchere listened, then replied humbly: “My apologies, my lord, I had not realised your eminence. Would you like two seats?”

In 1864, he was appointed as second secretary in Buenos Aires, Argentina. He replied that he did not mind accepting the post as long as he could carry out his duties while remaining in the agreeable German spa town of Baden-Baden. He was politely told that there was no further use for his services.

His involvement with Camden began when in 1867 he rebuilt the Queen’s Theatre in Long Acre (now a residential block) and used it to promote both his plays and the talents of his mistress, the actress Henrietta Hodson (they eventually married in 1887).

He acquired a safe parliamentary seat in Northampton but his time in government is remembered mostly for the “Labouchere Amendment” to British law which for the first time made all male homosexual activity a crime and became known as the Blackmailers’ Charter.

Again denied office after the Liberal victory of 1906, Labouchère retired to Florence where he died in 1912.

Some of his most interesting journalism arose when he found himself trapped in the Siege of Paris during the 1870 Franco-Prussian War. As the siege intensified, the food shortage became acute and such items as horses and cats became delicacies.

Labby left a record of his culinary exploits: “Today, I had rat – it was excellent – something between frog and rabbit – I was curious to see whether the proprietor of the restaurant would boldly call rat ‘Rat’ on my bill. His heart failed him – it figures as ‘Game’.”

By December: “All the animals in the Zoological Gardens have been killed except the monkeys. These are kept alive from a vague Darwinian notion that they are our relatives. Or at least the relatives of some of the members of the government.”

• Adapted from Neil Titley’s book The Oscar Wilde World of Gossip. For details go to www.wildetheatre.co.uk