‘Every game a cup final’ for team fearing new lockdown

Highgate Albion are back playing ‘the game that they love’, but with coronavirus cases in England on the rise, how long for? 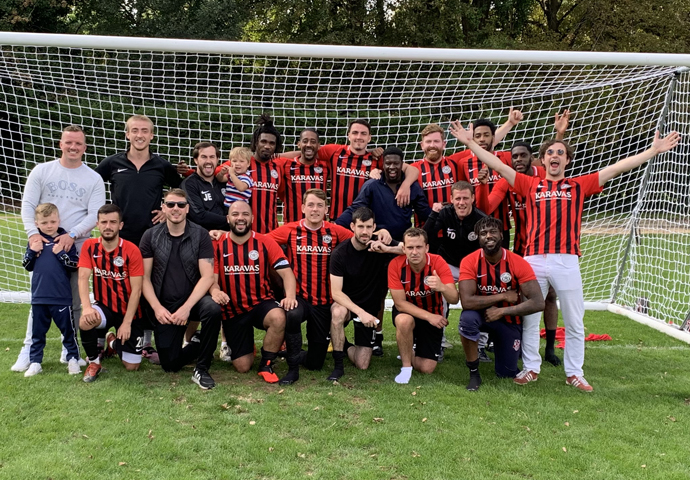 A SUNDAY league football team say they are treating every match “like a cup final” because of fears their season could be shutdown any second due to the coronavirus outbreak.

Highgate Albion Reserves have returned to action in Division One of the Barnet Sunday League with a bang, scoring 10 goals in their opening three matches.

But manager John Eager admits it’s difficult to fully motivate the players in his pre-match team talks when there’s a risk that any success on the pitch won’t lead to silverware.

“Last season our pursuit of the league title, two league cups and a county cup were curtailed because of the pandemic,” he said. “We were definitely on course to add some serious silverware to our trophy cabinet.

“Of course, all of our coaches and players are in full agreement that there are more important things than football at such a time,” John added.

“We were just hoping that local leagues and cup competitions would be suspended, and then restart from where they left off when it was possible to do so, instead of being cancelled and made null and void.”

On Tuesday Prime Minister Boris Johnson announced a range of restrictions in the House of Commons in an effort to combat the rise in coronavirus cases in England.

It included putting the planned return of spec­tators to sports venues from October 1 on hold, possibly for six months.

John said the move felt like the country was a step closer to shutting down local sports. He added: “We have to be mindful that at any moment the government could shut grassroots football down.

“Naturally everyone is a little on edge. A lot of people rely on football as an outlet from their everyday life and I feel it would be the worst thing to call it all to a halt again.”

A hit and miss return to the new season has seen Albion win, lose and then win again as they struggle to recapture the form that saw them challenging on all fronts last term.

Despite missing out on some “deserved trophies” when the league was cancelled back in March, Highgate were still awarded promotion.

They started life in Division One with an emphatic 5-0 victory over Kedares Town, but lost 2-1 in their second match against Northumberland Park Rangers.

On Sunday Highgate were very much a hit again as goals from Daniel Deeney, Alfie Francis, John McNamara and Paul Reid wrapped up a 4-1 win over Enfield United.

The run leaves them top of the table on goal-difference, albeit having played a game more than early rivals AFC Oakwood First and Northumberland Park Rangers.

Enjoying every 90-minute outing Albion can squeeze in, John said: “It’s great to finally be back on the pitch.

“We ended up not being able to play for six months, I must admit I thought that it was going to take a lot longer. But we’re now three weeks in to the new season and me and the lads are all delighted to be back.

“For most of us it was just important to cross those white lines again and start playing the game we all love and have missed.

“This Sunday we play Marcelona, and the boys are feeling confident they can get the win.”