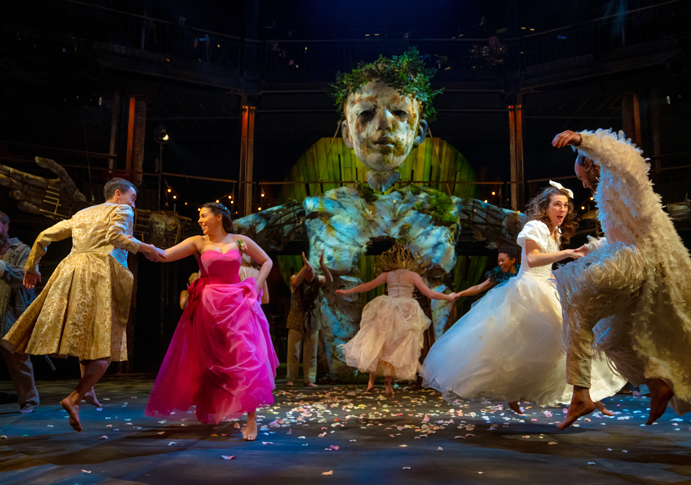 What has influenced your thinking around the production?

I think a big thing which has influenced my thinking on the production has been about what a forest is and what it represents. I did a lot of reading into the way forests function and the societal behaviour of trees. I was quite determined not to have any trees on stage, mainly because everybody kept asking me how are you going to do the trees?!

But actually, when you look into trees and their behaviour, they’re extraordinary. There’s a network of roots in a forest, so all the trees are connected to each other. If one tree is struggling then other trees who have enough, will send nutrients to try and save that other tree through the root system, regardless of species. They believe – it sounds ridiculous(!) – the success of the forest depends on the success of every single tree within that forest. I took that as a metaphor for society, and what Shakespeare is asking us to think about as audience members watching this play, especially right now in a time of increased borders and a rise of – you could say – nationalism, and concern with ourselves.

In the play there’s a marked difference between the restrictive world of the court and the forest. In our version of the play the audience will represent the trees. When the play reaches the forest scenes, the actors will be able to see the audience, whereas they didn’t have access to them during the court scenes. The forest world is a world where we can interact and communicate with each other.

You have said this production was all about putting the ‘you’ in As You Like It – can you tell us a bit about what you mean by that and how will this be reflected in the staging?

I think putting the ‘You’ in As You Like It is something that Shakespeare has done with this play – he’s constantly playing with the relationship between the actors and the audience, and lots of the characters in the play go between being characters, being spectators, being actors – he’s referring to the act of theatre constantly (“All the world’s a stage”). And so I think Shakespeare is asking us as theatre-makers to reconsider our relationship to the audience, making the audience feel that their presence in the theatre matters, that it changes what we’re doing. And they can be directly involved with what’s happening on the stage – so we’re really embracing that with the production.

I think it’s also reflected in the actors that are part of this show, and the other two plays that are part of the same season. We want the acting company to reflect the nation in all its diversity. This play was written at a time when society was becoming more diverse, and the play itself is about celebrating and embracing difference.

What are your current thoughts on the style of the production? Can you give us any early insights into the process?

I’m not setting the play in a particular time or place. It doesn’t feel like a play which needs a certain period setting. And I’m very aware as a director of not choosing a setting which restricts the play, and that only tells one aspect of the play so I always look for the approach and the framework that allows all of the play to live.

In many ways the play is a massive exploration of theatre itself. So there will be elements of panto, live music, stand-up comedy on stage. And there will be audience interaction, political debate and improvisation.

Although everyone will look and feel very modern, we’ll be using a real mingle-mangle of costumes from different productions, and will be playing with different genres, different times, different periods. It’s going to be a real mish-mash that celebrates the art of theatre making.

Would you say As You Like It is as much about ‘finding yourself’ as ‘getting lost’?

I think sometimes you have to lose yourself to find yourself. But Shakespeare isn’t asking us to get lost in order to just get lost – that would be pointless. He’s asking us to break down some of our barriers and to think outside of the boxes that we’ve put ourselves in, or that society has put us in. And he puts the responsibility on the human being to do that for one’s self. I think the play is about the potential for change in humanity, and for us to be able to change the world we must first change ourselves and embrace other sides of ourselves.

We understand that this production features one of the most ambitious props and set elements ever created by the RSC’s production teams. Can you explain a little bit about where the idea for ‘Hymen’ came about?

Hymen is the god of marriage, which will be represented by a very large prop/puppet We have to believe in this God and yet, God is not a tangible thing. God is a leap of imagination, so how do we get 1000 audience members to take that leap in their imaginations and believe in this God? All of the actors will be involved in the scene in which Hymen appears – it will be a communal act, to give the sense of coming together and believing in a God or in something bigger than ourselves.

The role of Rosalind has been described as ‘the female Hamlet’ and is credited with more lines than any other female Shakespearean character. Was this something that attracted you to the play?

Yes absolutely! I was attracted to a woman who is working out who she is as the play unfolds. I think sometimes with Shakespeare’s women, it feels like they already know who they are. Or that their internal life isn’t really the thing that Shakespeare is exploring in the play. With Rosalind it’s completely different. She changes her mind all the time, and she changes her mind with us, with the audience.

She talks about this magician, this uncle magician, who she’s conversed with since the age of 3, and Lucy Phelps, who is playing the role, and I have talked a lot about who on earth this magician is. We feel that this magician is inside of all of us, representing the potential for change and to be different people. The play is really all about Rosalind having a conversation with herself to find a way to contentment, and that’s not easy. Sometimes you have to crawl through the dirt to get to the diamond.

Many well known actors have played Rosalind for the RSC, including Peggy Aschroft, Vanessa Redgrave, Eileen Atkins, Juliet Stevenson, and more recently, Katy Stephens and Pippa Nixon. What do you think Lucy Phelps will bring to the role?

Ah, Lucy Phelps! I think Lucy is relentlessly intelligent and rigorous in what she as an actress and as a woman wants from the world, and she does all of that with generosity and with the most infectious spirit. I think you have to have both of those things to play Rosalind. And that’s something that she has very, very naturally.

Lucy’s never satisfied as an artist. She’s always digging, she’s always chipping away. But if you chip, chip, chip away in rehearsal, and then walk on stage and you’ve stopped chipping because you’ve decided what it is, then you’ve lost Rosalind – whereas Lucy has the bravery as an actress, to keep discovering… to keep searching…

What do you hope audiences will take away from this production?

I would like for the audience to take away a new relationship with their own ‘magician’. To feel able to explore the possibility and potential of change, especially right now, with all of the uncertainty in this country and Europe and the rest of the world. To feel that change is possible, and that change can come from working together, learning from each other and from being more honest. Being brave enough to jump off the cliff into the unknown.

If you were given the chance to escape to the forest, what three things would you take with you?

And a really good walking stick!