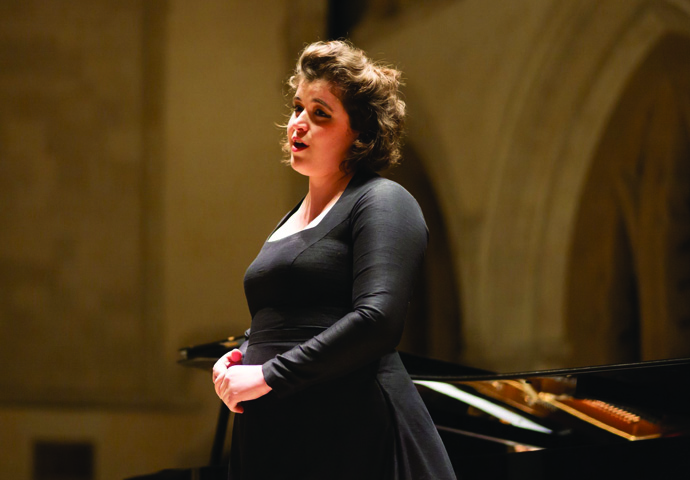 IN the world of female singing, mezzos and sopranos are (I dare to say this) two a penny by comparison with voices that go dark and deep: contraltos. In the 19th/early 20th centuries there seemed to be a lot of them, and though forbidding in appearance (with the deep voice went a certain sternness: heaving bosoms, ostrich feathers and the like), they were a mainstay of the oratorio circuit.

These days true contraltos are so rare they’re an endangered species. But a promising arrival on the scene is Jessica Dandy who can be heard in recital with pianist Peter Foggitt at Hampstead Parish Church on Friday September 27, 7.30pm.

For the past 18 months she’s been a member of the professional choir there, singing the liturgy on Sundays. But at the same time she’s been building a career as a concert artist, singing with elite period-performance bands like Les Arts Florissants or the English Concert, and making recital debuts at such fixtures as the Oxford Liederfest.

This year she’s toured Australia with conductor Stephen Layton. She’s just appeared onstage as Purcell’s Dido at the Ryedale Festival. And she sings Micah in a new Dunedin Consort recording of Handel’s Samson that issues next month. In other words, she’s not been idle – and her schedule more than justifies the decision she made early on in her career to mine the subterranean reaches of her voice. If decision it was.

“I went to Cambridge as a choral scholar,” she explains, “and at that point I was a soprano. Then I began the unglamorous slide downwards, but it wasn’t really planned – I was just doing what the voice dictated. The lower repertoire has a sense of space and luxuriance, and it felt right.”

For her Hampstead date she sings Vaughan Williams, Schubert and Ravel. And whatever the pros/cons of the Parish Church as a concert space, it at least has four walls and a roof.

Dandy’s performances don’t always benefit from such things. She has founded something she calls Songpath, which gives open-air recitals in the course of long walks and involves relating music to the natural landscape.