Bad Vegan offers a new way to give meat the chop 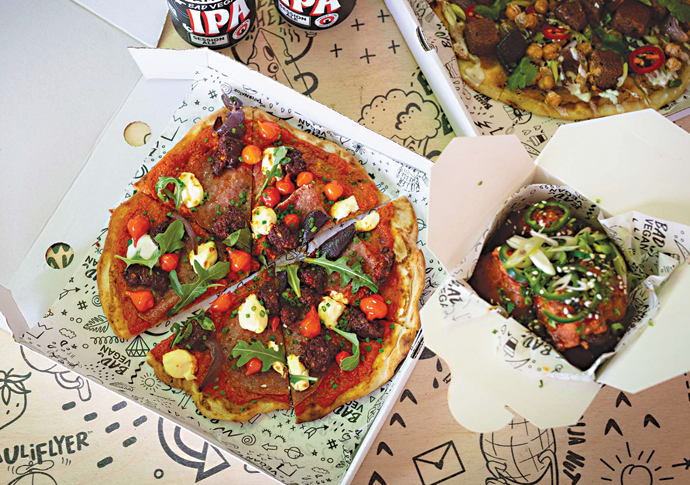 BACK in the days when vegan was an outer-fringe religion, it wasn’t a case that it was rare to find a dish on your average high street that could be called such a thing – it just didn’t exist, period.

And not too long ago – let’s say a couple of decades – tucked away would be what was called the vegetarian “choice” – though does having one option count as a choice?

How times have changed.

Clamber to the top floor of the new Buck Street Market and you will find Bad Vegan, chef Tom Kerridge’s chain of vegan-friendly diner-inspired food. The market now consists of shipping containers, hoisted in two years ago. You can find these “Box Parks” across brownfield spaces in London. They are the current thing, and, as Bad Vegan also signifies, they are a sign from Camden Market’s owners of their vision for the market of today.

Buck Street’s food of yesteryear was fast street grub in real time – skewers of super-hot chicken parts extended on to the pavements to tempt the tourist.

Whatever the pros and cons of change, and however enjoyable memories are through the misty lens of nostalgia, the new food stalls put the “Fings Ain’t Wot They Used To Be” refrain to bed.

Bad Vegan is clean, bright, welcoming, and boasts a simple menu written with an evangelical determination that the diner will be enjoying themselves.

Its boldness is based on “this is vegan food that won’t make you feel smug, but instead experience the greasy joy you get hungrily wolfing down a street stall hot dog in the middle of the night”.

This is no dainty offering to be picked at like a herbivore chewing some unsubstantial fodder – these are trucker’s café-level dishes.

Our first plate is named the Cauliflyer – this being Camden Market, they have off-the-wall titles – and it was boldly spicy and inventive.

The humble cauliflower was once boiled until its cell walls conceded defeat or smothered in a cheese sauce to mask the aroma associated with dinner halls during a wet break time. It’s been due a rebrand. The cauliflower steak has become a thing – grilled and smeared in a harissa, and the Cauliflyer draws on this brassica trend: fried to give an outer crunch, topped with chillies and coriander, it’s a decent starter or a side to one of the mains. Other options include overloaded wraps. The Taternator (another Bad Vegan trademark) is a spud rosti surrounded by piles of pickles and salads. It combines messiness, chewiness, crunchiness, and deliciousness.

To drink, the milk shakes march in, thick and gloopy, with the final third requiring some lung power to suck up, while the French fries deserve to be more than an afterthought. Here, it is impossible to absentmindedly stop having another, even as you are forking up a mouthful of your main. Crunchy, salty and unashamedly not one of the French fries/real chips hybrids (potato wedges, triple-cooked chunks, etc), these are evilly good.

With 80 per cent of the menu vegan, 20 per cent for those who aren’t ready yet, Bad Vegan offers a way to cut meat out of your diet but without feeling like you have to wear a monk’s habit. There is nothing holier than thou about this – and that’s what makes it so fun.