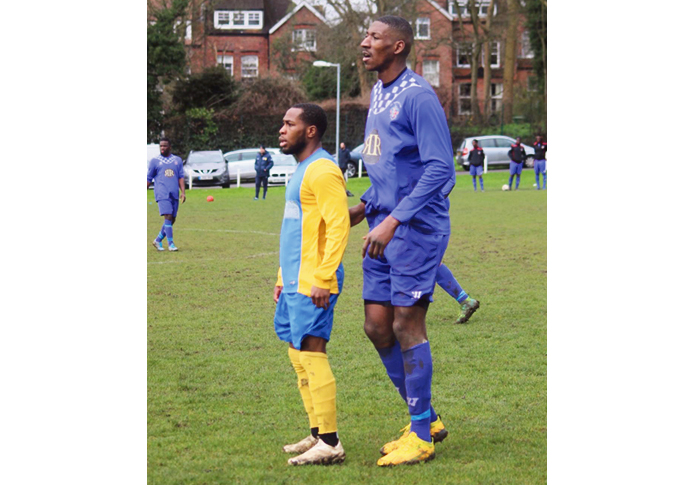 PLAYERS from Highgate Albion are hoping the club have “turned a corner” and recovered from “a tough couple of months” to reach towering new heights.

A disappointing run of form has seen the N6 side knocked out of the FA National Cup on penalties, and then cruelly lose in extra-time in the semi-finals of the London Cup.

Manager Adam Shahein needed a reaction from his team on Sunday when they took on AFC Hammersmith Town in the semi-finals of the Middlesex Premier Cup.

But it would prove a tall order as they went up against rivals featuring “some pretty big lads”.

John Eager, who is preparing Highgate’s Reserves for a Middlesex Junior Cup semi-final showdown against Grenfell Athletic this weekend, was among the supporters cheering on the Albion first team at their St Aloysius Sports Ground home pitch on Sunday.

He said: “Hammersmith had some pretty big lads in their line-up. Their centre-half was at least 6ft 6, and towered over most of our attackers, like Solomon Ofori who is only 5ft 5.”

Albion were far from fazed, however, and went on to seal a 2-0 victory thanks to goals from Ofori and Tage Kennedy.

Club captain Ian Maitland is now hoping they can go one better than they did last season when they lost 2-1 in the final against Old Southall. He said: “It’s been a tough couple of months. We’ve experienced our fair share of lows but it’s how you bounce back from that and today the lads gave their all and I couldn’t be prouder of them.”

There’s extra motivation for Maitland to be the one lifting the elusive Middlesex Premier Cup on April 26, as he was sent off in the final last year.

To add extra spice to the showpiece, Albion could again be tackling Old Southall – if they win their semi-final against Putney Town this weekend.

He added: “For me personally it’s a big occasion and an opportunity to right the wrongs of what happened in the final last season. We are all really looking forward to the game, whoever we face.”