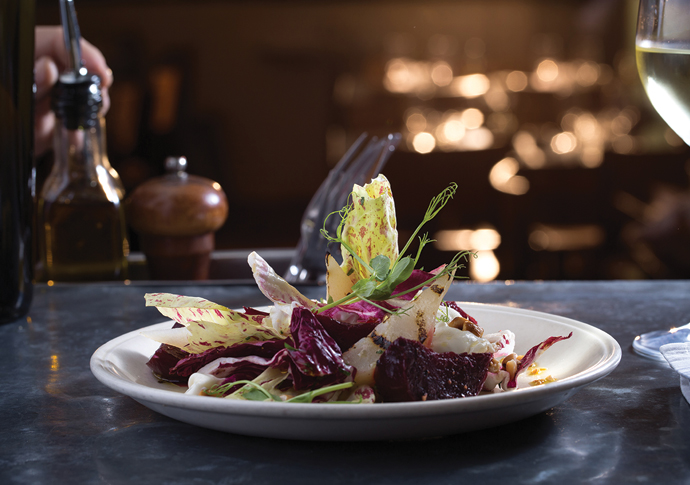 IT’S not often that a lunch knocks me sideways. The restaurant 10 Greek Street has just celebrated six years in business – a lifetime for Soho. Yet, unforgivably, this was my first visit.

It’s the kind of place that stirs strong emotions. “I’ve never had a bad meal here – ever,” said our neighbours, hogging their favourite seat by the window.

“Small restaurant, with a phenomenal, seasonal menu … I could eat here every day” is typical of the online reviews.

10 Greek Street is remarkable for its atmosphere of well-worn contentment. It’s a partnership between a Kiwi chef and ex-wine merchant, and both excel in their trades.

An ever-changing menu is chalked up on a smudgy blackboard. This is a smallish room, stretched by long mirrors, with an open-plan kitchen out the back. Five wooden stools overlook the crew of chefs, who work to a soundtrack of funk and mellow beats.

Décor is reassuringly rough around the edges. In the loos downstairs, signs are mismatched and there’s an extraction pipe smashed roughly through the tiles.

Fantastic food and wine are the focus here; fussy details are not high priority. The menu is creative and well-balanced. 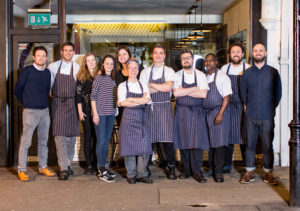 The team at 10 Greek Street

On our visit, nearly half the options were vegetarian. You could pick from a squash soup with Tunworth cheese; spiced cauliflower with yoghurt, pomegranate, mint and saffron; or baked celeriac with wild mushrooms, burrata cheese, truffle and spinach.

We shared black chick pea fritters, cunningly served with a hurly burly of contrasting textures: creamy yoghurt, crisp slivers of red onion and a scattering of crushed “kikones”, the deep-fried sweetcorn that the Spanish adore as a snack.

Next, we ripped into a whole quail slathered in fiery ‘nduja and what appeared to be a tentacled sea creature. (In fact, a grilled head of Tardivo radicchio).

A main dish of plump prawns was also inspired by Italy – threaded with fronds of agretti, a salty succulent, and slices of tart blood orange.

Glasses of wine start at a very reasonable £4. Or ask your waiter for the “little black book” – a hand-written list of rarer specimens.

We visited for lunch, when 10 Greek Street takes bookings. In the evenings, you may well need to queue.

They have just started to open on Sundays, too, and there are plans for an onsite brewery.

Expect to pay around £40 per head for a slap-up meal; less for a swift lunch.

If you’re feeling adventurous, book a table for a special visit from a chef from Bali, who will be cooking Indonesian food. On March 10 and 11, Kieran Morland will be offering dishes such as “Kerang”, made with razor clams, or “Soto Udang”, a dish of lobster, turmeric broth, leek, vermicelli and kale. Four courses will cost £30 per head.

I left 10 Greek Street with a keen sense of regret. I had wasted all those years flirting with restaurants elsewhere.