Young artists take the PPE out of Boris’s letter

What’s this? Kids being rude? Well, Foundling Museum, you asked for it! 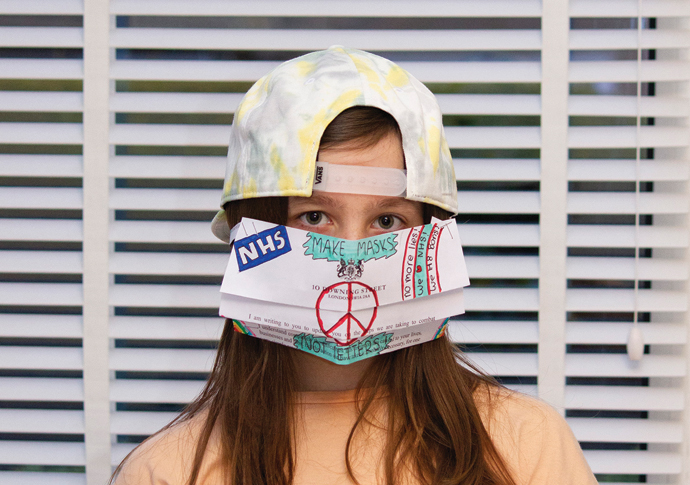 Poppy, aged 11, created a mask out of the letter from Downing Street

AS insults go, calling someone a “bloody carrot” is pretty tame.

But when you see those words and Boris Johnson depicted as the vegetable drawn on the very letter sent by him during the beginning of the first lockdown, it takes on far greater satirical power.

You may recall that the official letter from the government urging us “to stay at home, protect the NHS and save lives”.

Around 200 “repurposed” letters, with drawings and words across them are on display at the Foundling Museum (and now some are online in the wake of the new lockdown).

Children were given free rein to customise the government missive as they saw fit and the results are occasionally rude, sometimes crude, and often very, very funny.

The project was the brainchild of Jonny Banger, designer and owner of subversive fashion label Sports Banger.

It all started when someone received their Sports Banger T-shirt the same day as the prime minister’s letter popped through their letterbox. They took to social media with the proclamation: “one of these is going in the bin”. 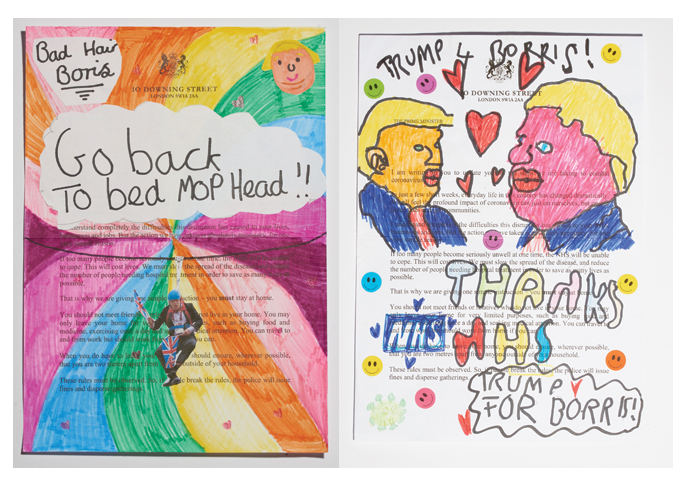 Posters by Anika (left) and Alfie

Banger stepped in and suggested that instead of dumping the letter, they use it to design a poster. It then sparked a bigger idea.
His social media call-out was straightforward: “if you’ve received a letter, design a poster”.

The rules were also simple: participants had to be under 16, draw straight onto the letter itself and he was very clear that there was to be “no digital”.

Banger received entries from across the UK, from toddlers to teenagers.

They are a pithy distillation of the concerns of the moment, with references to the need for PPE and praise for the NHS with the rainbows that came to symbolise support of healthcare workers, scattered among them.

There are also a fair few that use the letter as an anti-government protest.

One artist simply painted their bottom blue and sat on the letter to reveal their opinion – this image provides the poster for the exhibition. It is a succinct critique that would warm the heart of any self-respecting satirist.

And appropriating John Tenniel’s illustrations for Lewis Carroll’s Through the Looking Glass, one child has drawn Boris Johnson and Donald Trump as Tweedledum and Tweedledee.

Another more poignantly wrote: “Thank you NHS for saving my brother”. 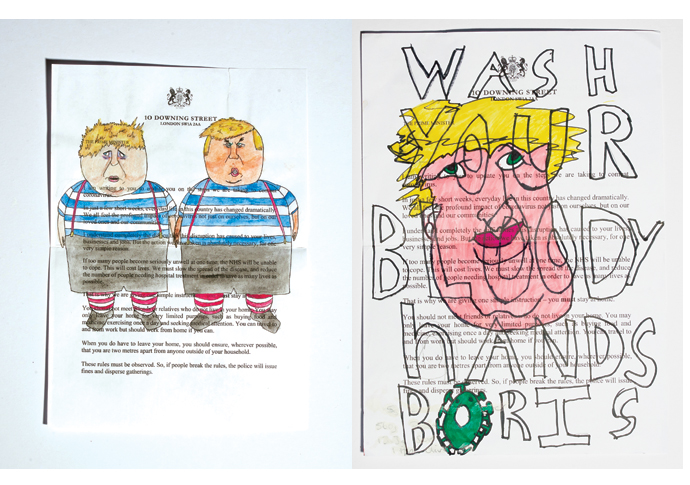 Posters by Roxy (left) and Lucas

Deller believes they are “the best art to come out of lockdown” and delights that they are “funny, naughty and angry in equal measure”.

Some of the letters can be found throughout the gallery and are interspersed with the Foundling’s historic collection, which is a neat touch.

And William Hogarth, credited as the grandfather of satire, who was a key figure in the founding of what was the Foundling Hospital, now the site of the Foundling Museum, would certainly approve.

As for satire, despite many suggesting it has lost its power in the era of modern politics where so many of the leaders are already caricatures, these works prove otherwise.

With the freedom to create whatever they want, these young people have exposed so much of the tragedy and fury regarding the pandemic and the government’s handling of it. 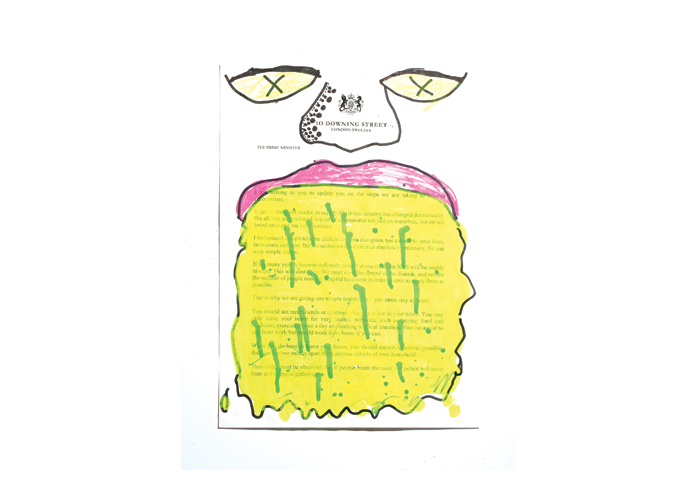 Deller says: “Young people’s voices have not been heard enough in this pandemic (when are they ever?). Here, the young artists speak for us rather than the other way round. There is a huge value to these letters. They will be enjoyed and more importantly studied for years to come.”

Ultimately these letters have captured a moment in history that will no doubt see their way into future books on the history of the Covid crisis. Indeed, a book containing all of the letters is due to be published in October.

They also give hope that our young are well aware of political spinning, subterfuge, and hypocrisy and are unafraid to call it out.

As Banger observes: “I couldn’t be happier using my platform to give kids a voice. Little anarchists spreading joy.”

• The Covid Letters: A Vital Update is scheduled at the Foundling Museum until January 17, 2021, but is temporarily closed due to the lockdown. You can see some of the letters and read about the exhibition at foundlingmuseum.org.uk/events/the-covid-letters/