Wubben-Moy: ‘I’ve got more to give’ 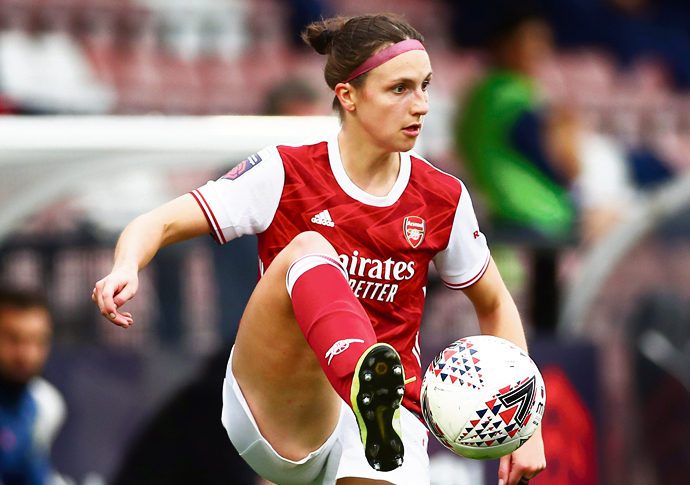 A PACKED calendar may have put Arsenal to the test recently, but lifelong Gooner Lotte Wubben-Moy seems to have passed with flying colours.

The 22-year-old, who grew up watching the men’s team at the Emirates Stadium, reported for England duty this week ahead of World Cup qualifiers against Austria and Latvia.

As she did so, the former Stoke Newington School sixth form student could look back on a standout spell that has seen her nail down a place at the heart of Jonas Eidevall’s Arsenal defence.

Virtually ever-present since assisting a Kim Little goal against Aston Villa then scoring herself against Everton in early October, Wubben-Moy aims to contribute even more as time goes on.

“Having opportunities to impact the game is something I’m grateful for and will continue to fight for,” she told the New Journal. “It’s a long season, and this is just the start. I have more to give and so does the team.”

A long-range strike from Vivianne Miedema and a Katie McCabe penalty secured a 2-0 win over Manchester United in the FA Women’s Super League on Sunday.

Wubben-Moy played her part, pinging pin-point diagonal passes across the pitch, while helping to keep an all-important clean sheet.

But the versatile defender had made an equally vital contribution a few days earlier when she scored in a 3-0 Champions League victory over Danish outfit Koge.

It was her first goal in Europe and she earned player of the match plaudits to boot – an achievement she continues to savour.

She said: “It’s important to celebrate these moments of achievement, so looking back I’m proud to say that it’s something I’ve done.”

Arsenal now sit three points behind leaders Barcelona in their Champions League group and the chance to close the gap on the European champions comes at the Emirates on December 9.

Before that night under the lights comes the biggest game of last-term, the FA Cup final against Chelsea, takes place at Wembley on December 5.

Because of the pandemic, this is the 2020/21 season final, but if the two sides’ current WSL title battle is anything to go by, it should be worth the wait.

Newly nominated for “The Best” FIFA Women’s Coach gong – football’s equivalent of the Oscars – Chelsea boss Emma Hayes has steered her side to within one point of table-toppers Arsenal. The Blues have also narrowed the Gunners’ goal advantage to one, bolstered by a 5-0 thumping of Birmingham City at the weekend.

But while she is delighted with her team, Parliament Hill School old girl Hayes says the timing of the cup final, off the back of an international break, is far from ideal.

“It’s a bit of a lottery,” she told the New Journal.

“We’re going into a cup final where we’ve got players flying in from Mexico, Australia, [and] from Korea – it’s really difficult to play a game on the Sunday.

“So I don’t know what team I will put out because I won’t know until Saturday before the game which players are going to be eligible to play, based on some of those flight schedules.

“Cup finals being organised three days after players are coming back into the country – I think it’s not optimal for players, but it is what it is.”

IT’S ON THE TV

England’s World Cup qualifier against Austria at the Stadium of Light is on ITV this Saturday at 12.30pm. The Lionesses will be broadcast live again on ITV on Tuesday at 7pm when they face Latvia in Doncaster.