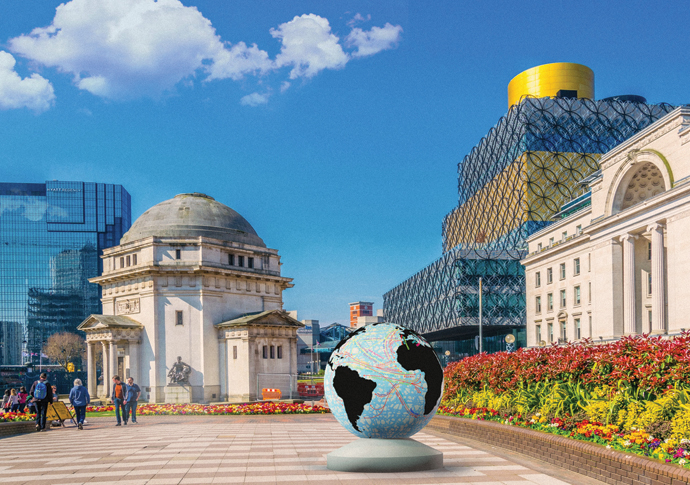 A GROUNDBREAKING mass-participation art and education project, that hopes to transform how we understand the transatlantic slave trade, is inviting submissions from UK-based artists.

Large globe sculptures will be dotted around locations including London, Brighton and Hove, Bristol, Birmingham, Leeds. Liverpool and Swansea in public trails.

The project called The World Reimagined, has been in the planning since 2019 and is the brainchild of former EastEnders actress, singer and writer Michelle Gayle who is starring in the West End as Hermione Granger in Harry Potter and the Cursed Child, and Dennis Marcus.

Celebrated artists, including Turner prize nominee and The World Reimagined founding artist, Yinka Shonibare, as well as emerging talent, will design the globes that will be in cities from August to October 2022.

There will be 10 globes on each city trail – with more trails planned for London – featuring one globe for each of nine themes under the banner: Journey of Discovery.

These nine themes are: Mother Africa; The Reality of Being Enslaved; Stolen Legacy: The Rebirth of a Nation; Abolition & Emancipation; A Complex Triangle; Echoes in the Present; Still We Rise; Expanding Soul and Reimagine the Future.

The open call is for UK-based visual artists working in paint, photography, drawing, mosaic, sculpture and collage to submit up to two designs responding to the Journey of Discovery theme.

The deadline for the submissions is 5pm on December 31, 2021. Successful commissions will be selected by The World Reimagined jury which includes artist Chris Ofili and is chaired by the project’s artistic director, Lady Ashley Shaw-Scott Adjaye.

She says she hopes the public art trail will “create space for dialogue”.

“We will probably have 70-80 open call artists,” she explains.

“You could have a 15-year-old student or an 85-year-old artist who has never practised professionally but has decades of experience.