Windrush victim tells of his ‘torment’

'It devastated my life and changed me as a person, but thanks to the support of people around me, I have managed to stay standing' 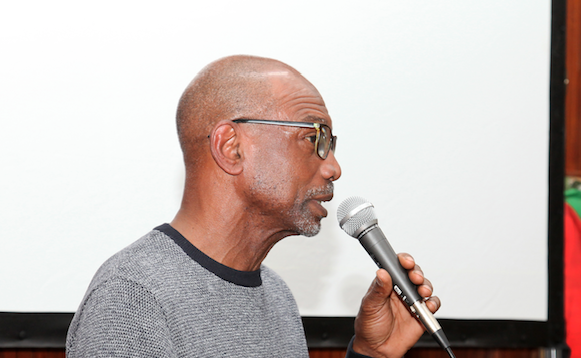 THE human cost of the government’s “hostile environment” policy which wrongly classified thousands of former child migrants from the Caribbean as illegal immigrants was laid bare when one of its victims spoke publicly of his ordeal.

“I have been dragged through the mud and tormented, my inner being has been soiled,” said Michael Braithwaite, who lost his job of 17 years at Gospel Oak Primary School in 2016 as a result of the immigration crackdown. “It devastated my life and changed me as a person, but thanks to the support of people around me, I have managed to stay standing.”

Mr Braithwaite, a Camden resident since arriving in the UK from Barbados as a child in the 1950s, was speaking at a meeting organised by the Highgate Labour Party last Wednesday to highlight the continuing Windrush scandal.

Unable to work, barred from access to benefits and the NHS, he also remained under threat of deportation despite supplying the Home Office with the evidence it needed of his life in the UK.

“I thought I had nothing to lose by telling Channel 4 News about what was going on. That same evening after the programme went out I got a call from the Home Office saying I would get my biometric residence card,” he said, explaining how his case was eventually resolved last year.

Despite the resignation of Home Office minister Amber Rudd last year in the wake of the furore, and an unprecedented government apology, the meeting at St Pancras Church House in Somers Town heard that one of the people scheduled for deportation to Jamaica last month had been a child migrant who was attempting to regularise his immigration status through a scheme set up by the Home Office. “

He fits into the definition of a Windrush migrant but the Home Office did not determine his application,” his lawyer, Connie Sozi, explained after describing the many hoops she had to go through with officials to get her client finally removed from the flight, which had 29 deportees on board. “For a government to say that the Windrush scheme was meant to rectify past wrongs, this is not the way to go about it.”

Titled Let’s Talk About Windrush, the event was hosted by Shezan Renny, Highgate Labour Party’s black and ethnic minority officer, who told the nearly 100 people in attendance that the scandal was a “direct result of the hostile immigration policy”.

The meeting heard that there were now calls for a campaign of civil disobedience to take place on June 22 – the day set aside by the government to mark the arrival of the Empire Windrush 71 years ago.

“The government only agreed to a Windrush Day because of the scandal, but their apologies are hollow, they are a waste of time,” said Patrick Vernon, a former Labour councillor in Hackney who last year launched a petition calling for an amnesty for Windrush migrants.

According to campaigning academic Dr William “Lez” Henry, the Windrush generation has always felt it was the target of a hostile environment, pointing to the current revival of reggae song English Girl by Sister Audrey that in 1984 talked about how Caribbean migrants were being asked produce their “papers” 40 years after arriving in the UK.