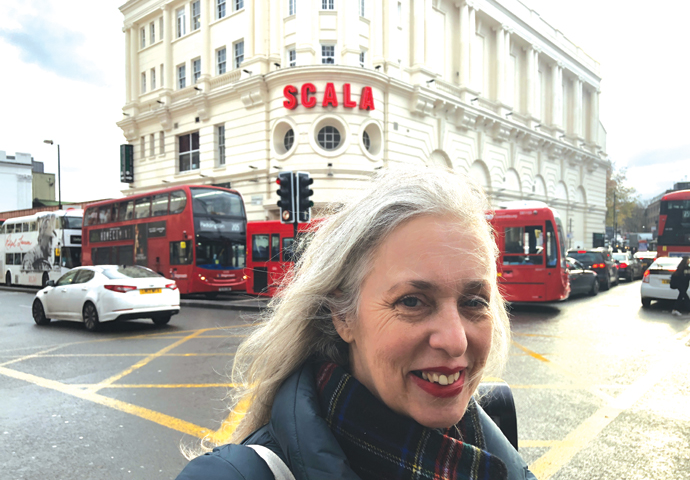 Jane Giles in front of the Scala cinema

IT was the host of some of the craziest films ever made, boasting an eclectic programme that offered something for everyone and ran right through the night.

Now, the story behind the Scala cinema in King’s Cross is the focus of a film itself.

Former Scala programmer Jane Giles, who has also penned a biography that tells the Pentonville Road picture palace’s history, is one of the directors who is putting together the project.

She said the cinema had become “the world’s most influential and notorious cinema, with over a million people passing through its doors for revolutionary double-bills and all-nighters of classics, cult movies, horror, kung fu, LGBT+ and music.”

American director John Waters, who made films Hairspray and Pink Flamingoes, has been a long standing supporter of the cinema.

He added: “The Scala had magic. It was like joining a club – a very secret club, like a biker gang or something. It’s like they were a country club for criminals and lunatics and people that were high, which is a good way to see movies.”

Ms Giles, who worked at the cinema between 1978 and 1993, said: “Among those diverse audiences were Steve McQueen, Mary Harron, Ben Wheatley, Joanna Hogg and Christopher Nolan, who still carries his last Scala membership card in his wallet.

“Post-punk but pre-digital, the Scala cinema existed during a particularly turbulent period which culminated in a perfect storm of recession, redevelopment and a devastating court case.”

It later became a nightclub and music venue.

The film includes more than 50 interviews, archive footage and snippets from some of the films screened.

Ms Giles said: “This is a universal story of youth and rebellion at what is now a critical point in film history, with crowds slow to return to recently locked-down venues and cinemas questioning their own future.”

She got her first job at the cinema in her early 20s, and said the documentary will draw on the talent of people beginning careers in the industry, using recent graduates from the National Film and Theatre School to work cameras, lighting and sound.

The film is being crowd-sourced for funding with the hope it will be completed in time for festivals in 2022.