Who is this man?, police ask in bid to solve 1976 Lido mystery 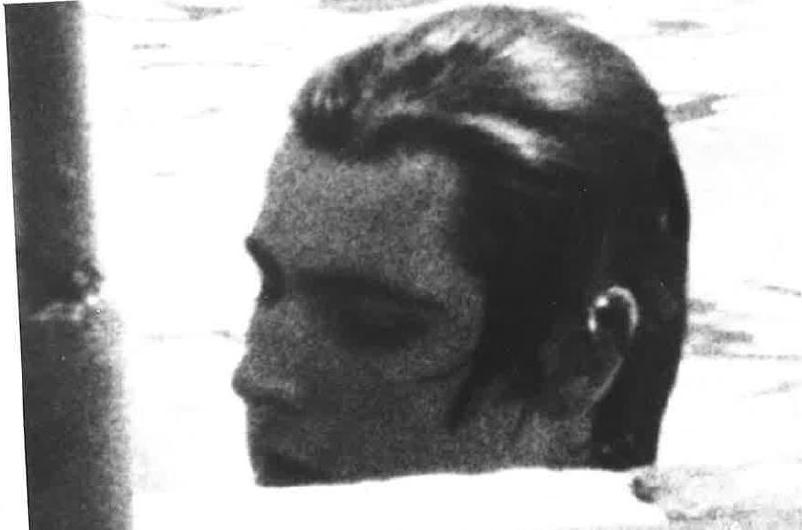 Detectives are trying to trace a man photographed at the Lido

REWARDS totalling £40,000 have been offered to finally unlock the truth behind the death of a 15-year-old boy at Parliament Hill Lido more than 40 years ago.

Police have put up £20,000 while Enrico Sidoli’s relatives have matched that sum, as a new appeal for information was issued. Enrico died at the Royal Free Hospital 11 days after being pulled unconscious from the open-air swimming pool where there were reports of him being punched and held under the water.

The family and Scotland Yard’s “cold case” detectives met following the New Journal’s coverage on the four-decade anniversary last year. The case pricked the conscience during the heatwave summer of 1976 with a public outcry over how nobody among more than 1,000 visitors at the Lido could provide detectives with information as a so-called “wall of silence” went up across north London. But it had hardly been written about in recent years until relatives made a new appeal in the New Journal last year.

Enrico recovered consciousness after being pulled out of the water but died on July 19. A post-mortem examination gave the cause of his death as irreversible brain damage caused by cardiac arrest. Two people have been interviewed under caution as part of the investigation.

A 16-year-old boy was interviewed by officers in September 1976, and a 25-year-old man was interviewed in August, 1986. No further action was taken and there have never been any arrests or charges.

DI Susan Stansfield, of the Met’s Special Casework Investigation team, said: “We believe there are others who saw what happened and have vital information that could assist us. Detectives’ efforts have been hampered by a lack of information from reliable witnesses. We would urge anyone who was at the pool that day and has information relating to Enrico’s death to do the right thing and come forward and help us with our investigation. Your information could unlock this case and give Enrico’s family some answers. “

She added: “A picture was taken just after Enrico was rescued from the water, and it shows a dark-haired man swimming in the pool. He has never been traced or spoken to by police, and we would be very interested to talk to him about what he saw that day. “I hope that after 41 years, any witnesses who were too scared of, or had loyalties to, the people involved at the time will now find the courage to contact police.”

THE traumatic events of that hot summer’s day 41 years ago are as clear to the family of Enrico Sidoli as if it happened yesterday.

The pain of their loss – compounded by the knowledge that someone, somewhere, knows the truth behind their much-loved brother’s death – has never subsided.

The Sidoli family have never had the opportunity to properly mourn, knowing that someone responsible for his death has never been held to account for their actions. Enrico’s sisters, Iolanda Sidoli and Elizabeth Brown, have met with “cold case” detectives at New Scotland Yard to launch a fresh attempt to find out what happened to Enrico. Speaking to the New Journal, a picture emerges of a happy and well-respected family whose lives would never be the same again after July 8, 1976. 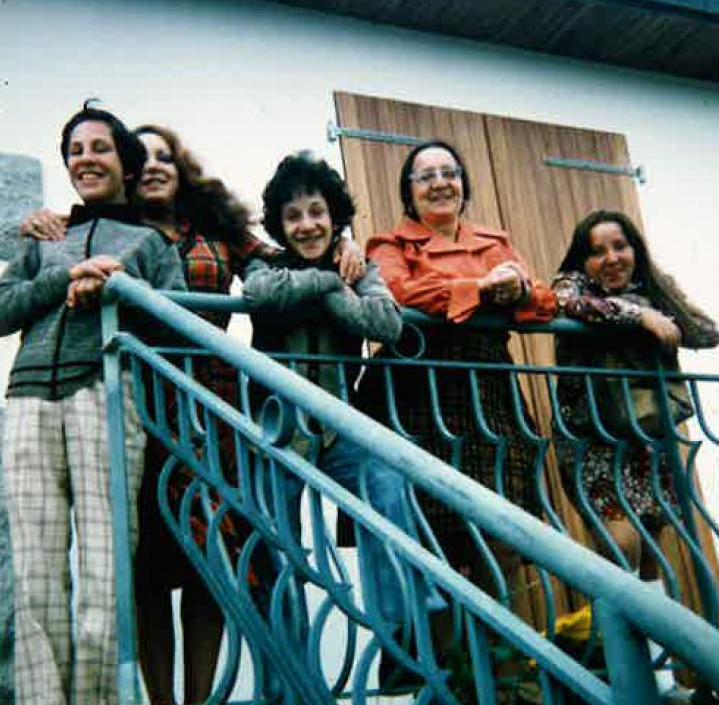 The family were living in Prince of Wales Road and Enrico was a pupil at a school in Millfield Lane, Highgate. His sisters were at Haverstock and St Richard of Chichester, while his father Antonio had worked in the restaurant trade and as a van driver. Antonio had grown up in Italy and was proud of their Italian heritage – Enrico was named after the celebrated Italian opera tenor Enrico Caruso and day trips were spent visiting Roman sites in and around London.

Summer holidays were enjoyed in the West Country and there were picnics on Parliament Hill Fields, shopping trips to Queen’s Crescent market, and happy gatherings where Enrico’s mother Louisa would cook beautiful meals.

“Enrico loved music – he absolutely loved Top of the Pops and he was very gifted,” recalls Elizabeth. Iolanda added that Enrico, who was dyslexic, would always walk away from any trouble.

She said: “Boys in the neighbourhood would sometimes bully him. Enrico was gentle and people would call him names – he was teased – but he was a very happy child and he loved life. He would go up into this room, listen to music and spend hours up there not disturbing anybody.“

But the tragic events of that day changed everything. “Our mother passed away in 1997 – and it was of a broken heart,” says Iolanda. “But our lives were finished the day Enrico died. Mum never recovered. She’d go and visit his grave. She’d lay a place for him at the dinner table. She would take a rose to the Lido every year.”

Now the family hope someone will finally come forward and help them discover the truth. “Whoever was involved must have family, too,” says Elizabeth. “They must have a conscience. It is terrible to know the people responsible must now be in their 50s or 60s.” 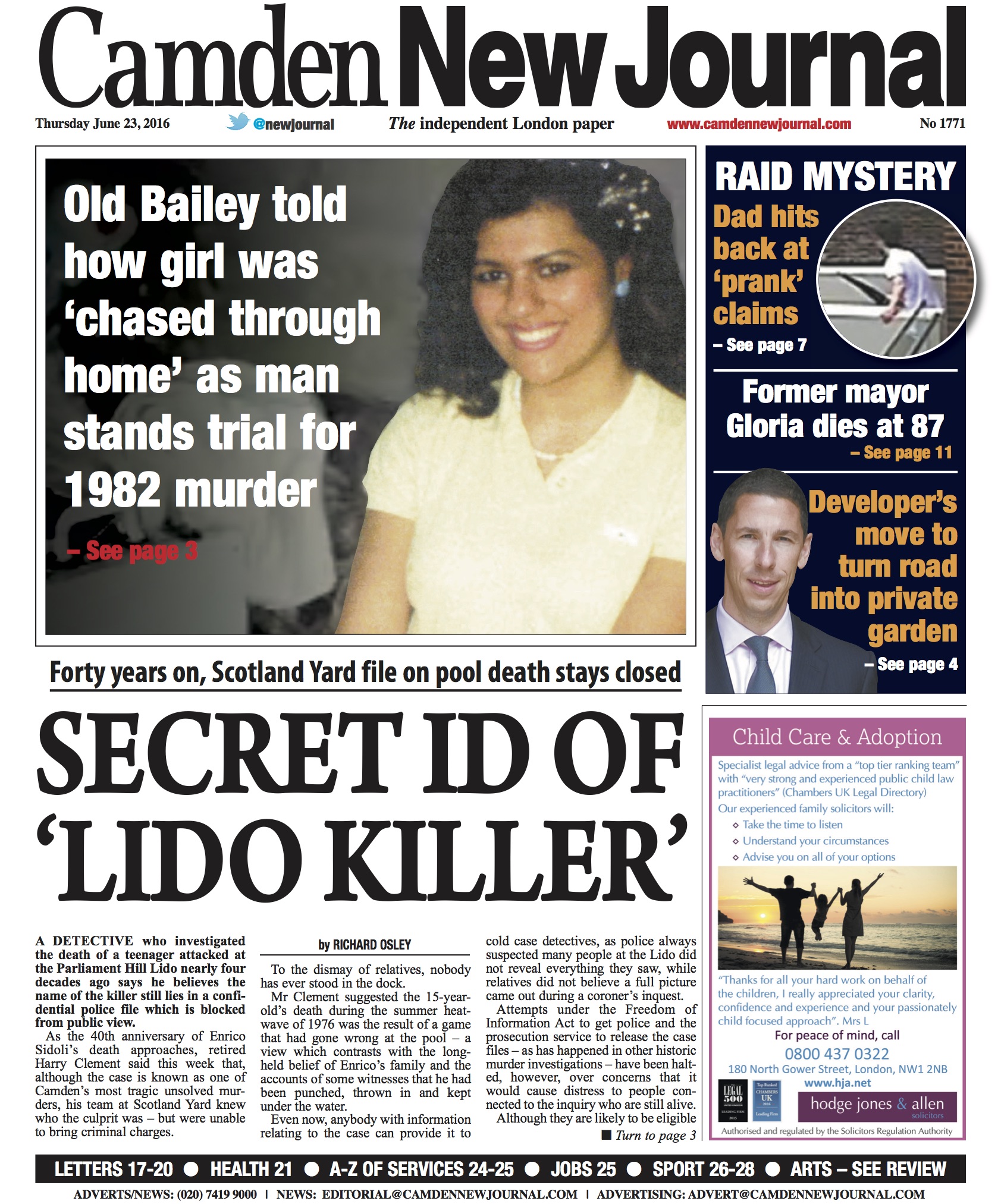 The chaotic nature of that hot summer day has been well chronicled. The Lido was packed – it is estimated that around 1,000 people were there, making the “wall of silence” over the events even more perplexing – and the unbearable knowledge of what their brother was subjected to only underlines the grief they still suffer.

“People said that when he was in the pool, there were boys pushing him and hitting him, holding him under the water,” recalls Iolanda. “Then, over the tannoy, everyone was ordered out of the pool and the lifeguards dived in and got him out.”

“There was a man seen swimming away and he has never come forward. We believe he may have been called Tony. People must know who he is,” adds Iolanda.

Cold case detective DC Murray Bannister is leading the investigation. He told the New Journal that detectives were trawling through witness statements taken at the time and they had a number of leads they were following.

“Most of the people there were school kids, predominantly aged between 11 and 16. Were they scared to talk about what they had seen? We heard Enrico had perhaps been in an argument with three older lads and maybe he confronted them. Nobody stopped to help him,” said DC Bannister. “The lifeguards that day had their hands full. There was high excitement on a hot day, with people running about, jumping in. Witnesses have said there were lads holding someone down, and we know there were three girls who saw something similar from different angles.”

He added: Was it high jinks? Was it the same incident? “Some people did come forward but the accounts vary. “Forty-one years on, they would now be in their 50s. They may have kids of their own. If they saw what happened, they have kept it to themselves for over 40 years.”

DC Bannister said that now was the time to break the “wall of silence” that hampered the investigation. He added: “There was talk that people were being pressured not to talk to the police, but it is hard to tell.”

The picture of a possible witness could yield further clues, he said. It shows a young man with swept-back black hair moving away from the side of the pool where frantic efforts were being made to save Enrico.

“He has certainly swam to the other side of the pool as Enrico was being treated and then got out. We want to know why. Was he a witness? Was he involved? We believe he got out of the pool on the opposite side of where Enrico was and left without talking to anyone,” said DC Bannister. “We want to speak to him.“