'This one, which was fairly tame, used to try to stroke my hair with its bill. I used to just think – what are you doing?' 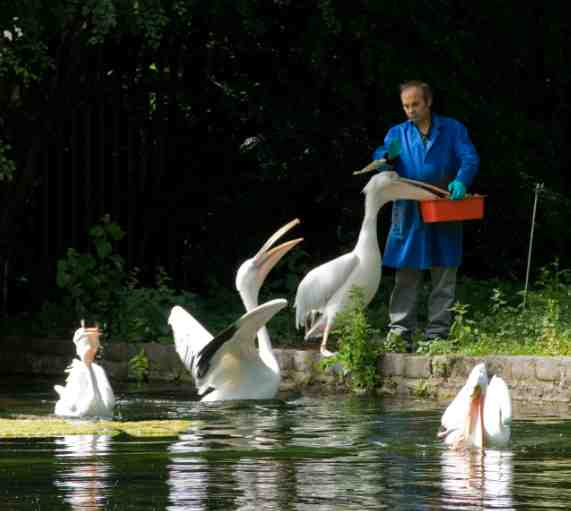 For more than 40 years, Malcolm Kerr has been looking after the wildlife in St James’s Park – and that includes feeding the famous pelicans.

As senior wildlife officer for The Royal Parks, he’s in charge of Hyde Park, Kensington Gardens, St James’s and Green Park, making sure all the wildlife are happy and healthy, and their habitats are up to scratch.

Working with nature, animals and the great outdoors, runs in the family. “My father worked in the Forestry Commission, my grand- father was a gamekeeper and my uncle owned a farm,” Malcolm says.

“I started in 1968 as a gardener in Regent’s Park, but that really didn’t suit me,” he says. “I was much more interested in wildlife.” So, aged 22, he applied to be the “bird keeper” in St James’s Park in 1975. That job stuck and he progressed through the ranks.

On a typical afternoon, Malcolm heads down to give the pelicans a fish dinner, which can include mackerel, herrings and sometimes sardines.

“They have a bit of a character to them,” he says. The big birds do a little fishing of their own, helping themselves to the fish in the ponds. But did they really eat a pigeon?

“It has happened once or twice,” he admits, adding that the last time it happened was about 15 years ago. “They are predators. What usually happens is people try to feed them bread. Pelicans don’t eat bread but pigeons do. The pelicans will take the bread in their pouch and spit it out again, and then a pigeon comes along and that’s an opportunity. They are opportunistic.”

There are currently three pelicans: Isla, who is named after Malcolm’s daughter; Tiffany, after the US jewellers who sponsor the park’s fountains; and Gargi, who has an interesting story behind him.

“A little boy named that one after it was found in a garden near Southend. It has been here 20 years now,” he says. “No one is sure where it came from, but we think it got blown over in a storm from Europe. They can fly long distances. People are amazed how high he goes – he flies around the park and is like a pin prick in the sky.”

Malcolm’s day starts at 5am, when he heads down to the parks, first checking on the waterfowl in Kensington Gardens. He brings his three dogs – two labradors and a spaniel – along to work with him and they help out when it comes to rescuing injured birds from the water.

He’s even lived on site in the past, in Stable Yard Lodge under St James’s Palace, but decided it was “too hectic” and moved to Middlesex. After many happy decades, Malcolm is set to retire this year.

It’s different from when he started. “It has changed big time. At one time the parks were kept like a billiard table, all neat and tidy. Now it’s more about biodiversity, so we keep things overgrown – we have flower meadows,” he says. “It is all to do with habitats.”

The pelicans first arrived in 1664, a gift from the Russian ambassador to Charles II. The park has had pelicans live to the grand old age of 54. But nowadays if they want to grow their collection, they purchase them from Prague zoo, which, he says, has a good breeding programme.

When they first come in, they stay in quarantine for 21 days and Malcolm recalls one particularly friendly new arrival. “Pelicans preen each other. This one, which was fairly tame, used to try to stroke my hair with its bill. I used to just think – what are you doing?”

Once they are out in the park, Malcolm says: “They will go near people, but not bother them that much. They will come close to you and sit next to you. We had two that used to sit on the bench. They do stress out a bit at feeding time as they want to be fed and there are lots of people watching.”

Do they ever bite when he feeds them?

“They can catch you, now and again,” he says, but it doesn’t hurt, as the bill is flexible and the pouch is similar to chamois leather. “There is no real power to them.”

When he’s not looking after the pelicans, he could be rescuing a bird that’s been in a traffic accident, helping an injured squirrel or checking all the ponds are up to scratch, with the right amount of duckweed and no problem fences.

He can often be found on duck island in St James’s Park, feeding the collection of ornamental waterfowl. “Exotic species of waterfowl need to be fed a certain diet.”

There are plenty of special events to account for, too.

“When we had the Olympics in the park in 2012, I was involved with that as the events in the lake can affect wildlife. The Serpentine had a lot of young swans, so we had to move them to a swan rescue centre till the races were finished.”

He’s also helped with the deer in Bushy Park.

There are always challenges, whether it’s people ignoring signs and doing what they shouldn’t, or big things like making changes to the park while maintaining the habitats.

“There can be things that are difficult to solve,” he says. “But as long as you do not rush in like a bull in a china shop, you can solve most things.”