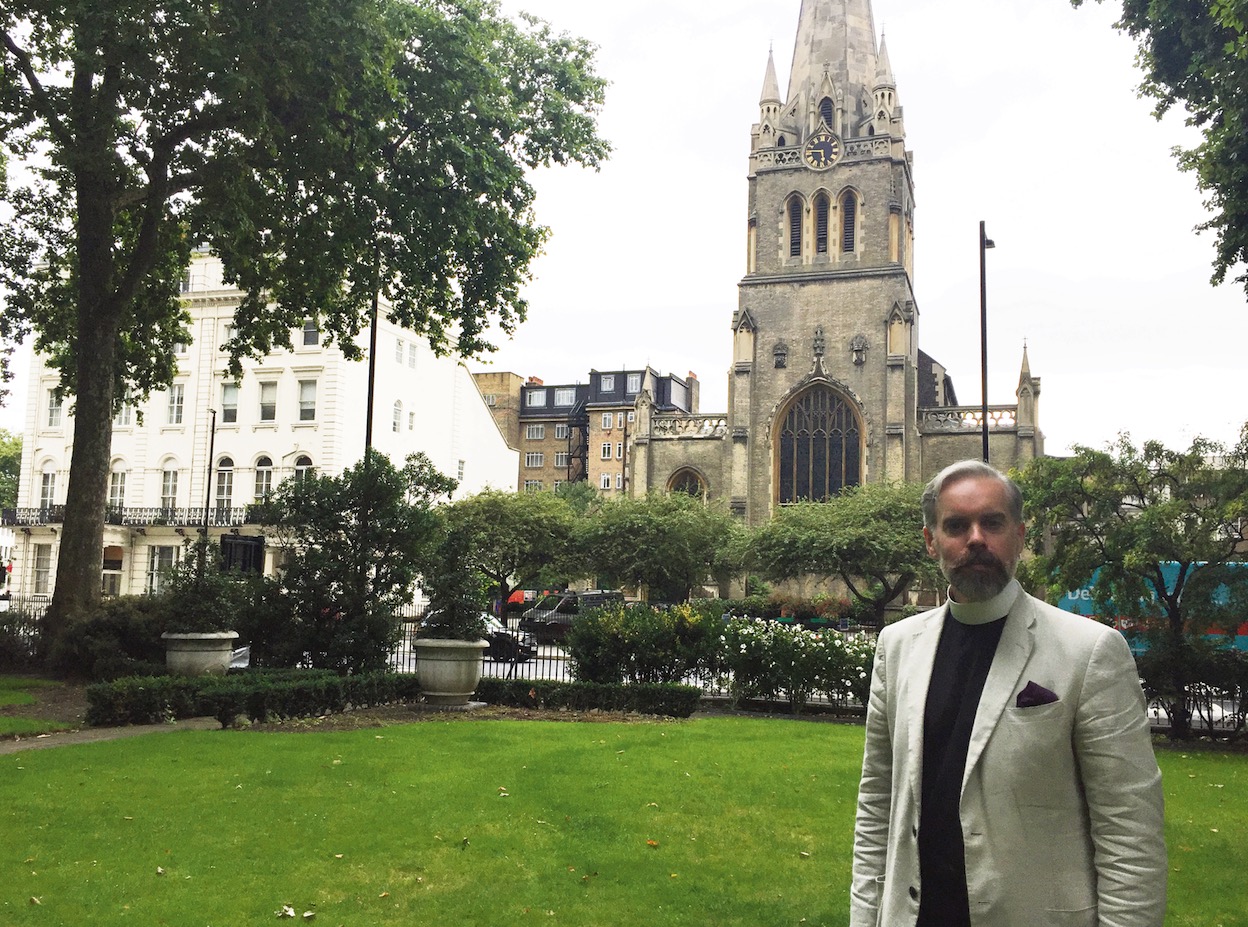 Well spoken and somewhat theatrical, Father Paul Thomas, the vicar at St James’s Church, Sussex Gardens, is a natural public speaker. “The difference between the public speaking of a priest to that of a politician or other such person, is that almost invariably the priest isn’t talking about himself,” he says.

“You are there talking about Jesus Christ and not Paul Thomas. Frankly a sermon about Paul Thomas would be terribly short and very uninteresting. I find one can be much more animated as you are not feeding the ego within.”

Fr Paul grew up in Pembrokeshire in south west Wales, “about as far from London… as you can get”. He did not grow up in a Christian family and it was only at university in Cardiff and later Oxford ‘The churn of the population means one is being constantly surprised and stimulated by the variety and the dynamism of life that he truly embraced religion. In 2002 he became a priest and settled in London.

“When I visit my parental home I am reminded how deeply one can breathe the fresh, pure, air and to be on the cliffs overlooking the sea and so on,” he says.“ But I always enjoy coming back to London. One needs both of those realms of experiences.

“My journey up till now is surprising as my upbringing did not in any way suggest this life, this vocation, or this calling. But the Lord works in surprising ways,” he says. “Some people think that to be a Christian you have to be brought up as such.” This is not the case he adds. “I myself have had the honour of baptising a 90-year-old lady.”

Of the area, he says: “People are always either going somewhere exciting or coming from somewhere exciting. There is a buzz about it. “It makes the church even more important as a place of calm, an oasis. People talk with great emphasis about community. You always know when people start using or overusing a word, it is because there is an absence of it, a deficiency.”

It was up to them to help build this, he says. The church itself, is an “inspiring” Victorian gothic building. “The Victorians were very good at building churches. My church was built with no expense spared. It is a wonderful place.” Built in 1843 has a number of claims to fame, not least for being where Oscar Wilde was married in 1884 to Constance Lloyd.

“His grandson has returned to St James’s on a number of occasions, most recently to unveil a plaque commemorating the marriage of his grandparents. He is very charming and interested in his family. It is quite a legacy to have.”

Among other famous parishioners there’s the discoverer of penicillin Sir Alexander Fleming and JM Barrie, the author of Peter Pan, as well the founder of the Scouts, Robert Baden-Powell, who was baptised there.

“They are memorialised with pictures in the great west window” Father Paul says. “It has Alexander Fleming looking curiously at a petri dish.”

The parish hall used to be a meeting place for many actors and comedians. “The cast of Dad’s Army used to rehearse there, The Beatles attended an audition in our church hall and the comedian Tony Hancock used to meet in our hall to rehearse. All of this means St James’s has a very colourful and varied past, full of new things and new people.”

But he doesn’t want just to focus on the past. “St James’s is a lively, living, diverse, vibrant, Christian family,” he says. “It continues to attract and inspire new generations of people. It is a thrilling place to be. The mobility and the churn of the population means that one is being constantly surprised and stimulated by the variety and the dynamism of life. You are constantly being introduced to new perspectives and outlooks.”

But despite the flux, a long-standing community still exists, he says. “One parishioner moved into the Hallfield estate when it was brand new and has seen the neighbourhood, change and grow.”

Another is 91. “He was born on the same day and same year as the Queen and has lived in the same basement flat for 50 years.”

Many young families are settling in the area, regenerating the stable community. Fr Paul lives next door to the church with his wife and two-year-old son.

“My wife Louisa is wonderful and patient. It is incredible when you find someone who is willing to forgive you every day. My private life has the wonderful chaos of any family home.”

He is a member of the South East Bayswater Residents’ Association, whose territory corresponds with the church. It plays a part in watching out for residents and Fr Paul believes the arrival of Crossrail is something that could bring the biggest changes. “Clearly it is a wonderful piece of engineering, mind-boggling,” he says.

But he adds: “There is a risk that much of what makes Paddington distinctive in terms of its residents might slowly fade away because of increased rents, house prices, and other such changes. We wait and see. What any place needs to thrive is people who love living there.”

As for his own future, there are exciting times ahead as he and Louisa are expecting a baby boy – and quite fittingly, “his due date is Christmas day”.