We're on our way to Wembley! First trip for Arsenal boss 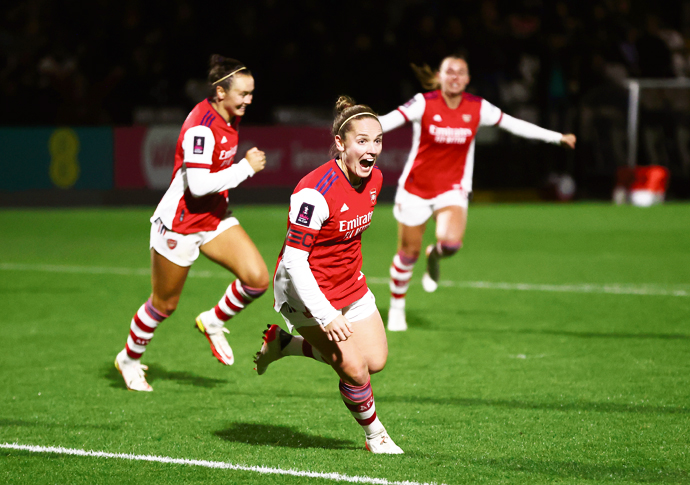 Kim Little celebrates her goal in the 3-0 win over Brighton at Meadow Park. PHOTO: GETTY IMAGES VIA THE FA

ARSENAL may have booked their third-ever FA Cup final date at Wembley, but it will be a first for their Swedish head coach – who has never set foot in the national stadium before.

“Obviously it’s a legendary stadium,” Jonas Eidevall said after his team beat Brighton 3-0 in the semi-final on Sunday to set up a Wembley day out on December 5.

“Personally, I’ve never been, either as a coach or as a fan. The closest, I think, is [that] I bought tickets to Adele many years ago, but we didn’t end up going, me and my wife. This time I’m definitely going!”

Goals from Kim Little, Beth Mead and Leah Williamson made sure of that, while Erin Cuthbert, Melanie Leupolz and Beth England helped Chelsea overcome Manchester City 3-0 to set up a London derby.

It will be a third Wembley final for the Blues and their head coach Emma Hayes, who earlier in the week revealed how at home she felt in the stadium and the competition.

“It’s dear to me because it’s so entrenched in my childhood, [and] I’ve been there as a coach. I’m used to being there, it feels quite homely,” said the former Parliament Hill School pupil.

“Even in my early years being [as player and assistant] at Arsenal with Vic [Akers] the FA Cup was always a special, special competition.

“The fact that the crowds are growing with it has been the other highlight for me – watching the game and the crowds grow with the competition.”

Arsenal may have won the cup 14 times to Chelsea’s two, but it is honours even between the two teams at Wembley.

Under Pedro Martinez Losa, the Gunners beat Hayes’ team to the title in 2016; Chelsea were victorious in 2018, seeing off Joe Montemurro’s Arsenal in front of a record 45,423 fans.

Given that this is a delayed cup final from the 2020/21 season, a victory would secure the treble for Hayes and her players.

For now, though, the focus is on this term’s domestic and European title tilts.

Arsenal host West Ham in the FA Women’s Super League on Sunday live on Sky Sports, before travelling to Denmark to face HB Koge in the Champions League on Wednesday.

On Saturday, Chelsea travel to Villa, then on Tuesday they are away to Swiss side Servette.

Spurs, meanwhile, are at home to Manchester United in a Sunday WSL lunchtime match live on BBC2.