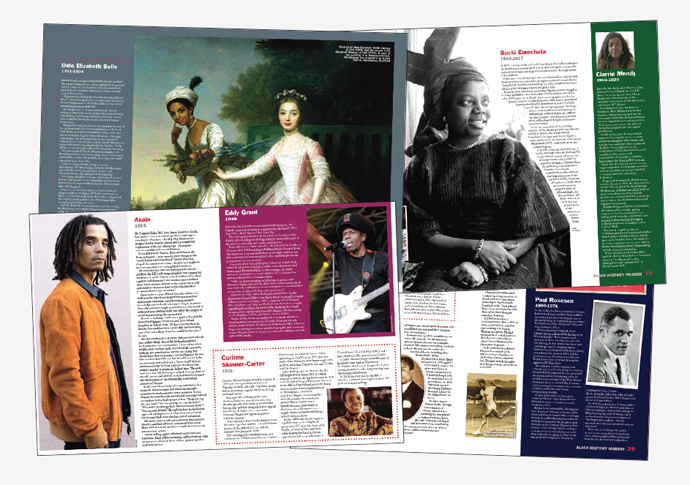 I WAS taking a walk down to King’s Cross and found myself standing in Goldington Street, Somers Town, former home of a tiny fringe theatre called the Unity. It was here in 1938 that Paul Robeson, one of the highest paid entertainers in the world, performed for free after sensationally turning down an offer to star in the West End.

The play, Plant in the Sun, was about striking workers, staple fare for the avant-garde Unity and a perfect vehicle for the increasingly politically conscious Robeson. I imagined Robeson making his way to the converted Methodist chapel where the Unity was based, from his home in leafy Hampstead to Somers Town, its air grimy from the smoke of steam trains coming in and out of St Pancras station, and I wondered whether any passing local would have been able to quite believe their eyes as the superstar raised his hat to them in the gathering evening gloom.

Robeson is one of the people included in Black History Makers, our celebration of historical black and Asian figures connected with this corner of London and those who have continued in their wake. One does not have to look that far to find them, even if you only took a 20-minute stroll from Goldington Street.

Nearby is Cranleigh House, one-time home of anti-colonialist crusader George Padmore. It is said that almost all of Africa’s independence leaders passed through his small cluttered kitchen at one time or another, among them Ghana’s founding father Kwame Nkrumah. A little further south, we arrive at Euston station, where railwayman Asquith Xavier scored a landmark victory against the colour bar in the 1960s; thence across Euston Road to Leigh Street, where Mary Prince escaped from her sadistic owners to write her slave narrative, and on to Tavistock Square, where a temporary Pakistan embassy was set up in the flat of campaigner Ali Mohammed Abbas in 1947.

They are all part of our rich local history though we may not know it. Just as there is the hidden townscape unearthed by Gillian Tindall in her brilliant study of Kentish Town’s past, The Fields Beneath, so there are the shadows of those who lived and worked around the corner from us to stamp their presence in a world that did not always welcome them.

Comprising 51 snapshot biographies and superbly designed by our in-house team, Black History Makers opens with the rapper and social commentator Akala (born 1983) and ends with the abolitionist Olaudah Equiano (born 1745), reflecting a continuum in the struggle for social justice and cultural expression that has been taking place for almost 300 years. Some of those featured have never appeared in a history book or TV documentary. They worked with their heads down to become heroes only in the lives of those they touched, yet their contribution to society was far reaching.

But even the famous risked sinking without a trace. It was the Camden New Journal alone that reported that a stone had been erected on Claudia Jones’s unmarked grave at Highgate Cemetery in 1984 after a local youth group raised money for one. It would take more than two decades for Jones to be officially recognised as a figure of international importance.

As an independently owned newspaper rooted in the community (nowadays many local papers are warehoused together in places like Romford, Essex), the Camden New Journal and its sister papers the Islington Tribune and Westminster Extra have been consistently highlighting the stories of those others preferred to look away from. Therefore, we had a rich archive to cull from in putting together this publication.

History was one of my favourite subjects at school, even the part learning about the kings and queens and the Battle of Hastings. But as I grew up I realised that there was so much more to learn and explore in my quest to understand my world and how we as a society got to where we are. It is hoped that Black History Makers will ignite a similar passion and curiosity, particularly in young people. It is a living journey through our shared history, enabling us to walk in the footsteps of some truly remarkable people.