Truth hurts in The Hunt 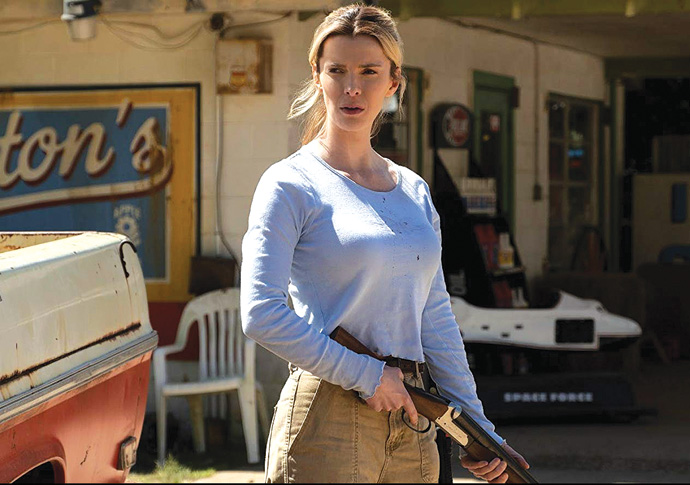 Betty Gilpin in The Hunt

He writes on the political blogging website Eudaimonia and considering the current socio-economic climate in the UK and USA, he paints a depressing picture of Anglo-American culture, as perceived by the rest of world.

He says three themes emerge from discussions with European-based journalists and academics: he asks them what they make of the UK and the USA today, and hears consistently, from across the political spectrum, that we are “thoughtless, selfish and arrogant, and cruel and brutal”. And that “Anglo-American society is now the world’s preeminent example of wilful self-destruction. Its jaw-dropping folly and stupidity is breathtaking to the rest of the world.

“The hard truth is this. America and Britain aren’t just collapsing by the day… they aren’t even just choosing to collapse by the day. They’re entering a death spiral, from which there’s probably no return.”

Harsh? Perhaps – but such an idea is at the forefront of this vicious satire by writers Nick Cuse and Damon Lindelof.

It tells the story of a group of people who wake up in a forest clearing with no idea how they got there, who everyone else is, or why they should have seemingly been drugged, kidnapped and then dumped in the middle of nowhere.

The reason almost immediately becomes obvious: a series of high-velocity bullets are sent in their direction, and it appears they are the prey in a vicious hunt organised by a group of “elites” who like to kill what they call “deplorables” for sport.

The film’s genesis came from a conversation between Lindelof and Cuse. They were musing on Pizzagate – a ridiculous conspiracy theory that went viral during the 2016 American election. It accused Bill and Hilary Clinton of running a paedophile ring from the basement of a pizza joint.

“Is there anything we wouldn’t believe about the ‘other side’, and them about us?” they asked each other.

And from this idea has sprung a bitter social satire, a blood-soaked horror comedy that asks us questions about fake news, conspiracies, and how essentially our societies are on a precipice caused by the fact we can no longer find comfort in cold, hard, home truths.

They decided the hunters would be a group of snobby liberals – and that they wouldn’t be very good at it, as they were essentially “snowflakes”.

The prey are all copybook working-class Americans, the demographic who helped put Trump in the White House.

Caught in the middle is Crystal (Betty Gilpin), an Afghanistan veteran who works for a car hire company and isn’t going to take her fate lying down. She is up against Athena (Hilary Swank, playing a marvellous Cruella De Ville-type baddie), who is a ring­leader for the game.

There are ideas hidden among the barbarous violence and stupid gags: how the elites of any political hue are all too easily caught up in their own closeted world, making them full of their own self-importance. It matters not what your core beliefs are: once you lead a life that mimics the 1 per cent instead of the rest of us, you lose the ability to feel true empathy.

Above all, The Hunt manages to offer something to provoke a bit of thought, and also, in a blood-splattered way, to entertain.

While the gruesome deaths are a bit wince-inducing, they are so comic book that they are designed not so much to shock but to raise an incredulous “they did wha-a-at?”

It is an idea that this film underlines with dash, ironically or otherwise.