Trio in bid to be English champs

Clubmates all set to compete in finals of development boxing championships 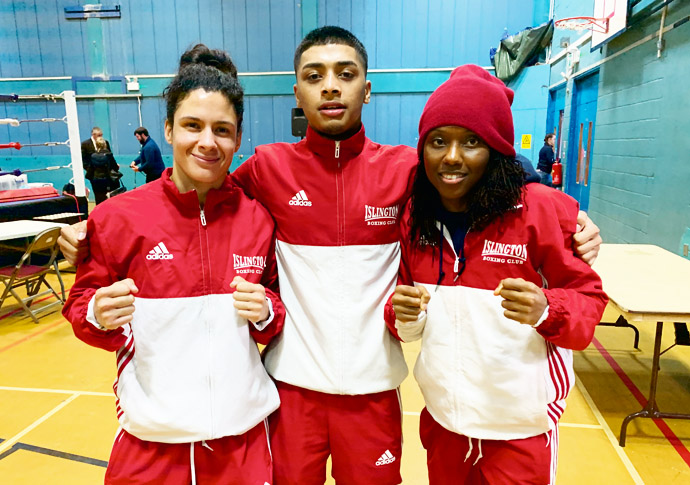 A TRIO of big-hitters from Islington Boxing Club will be going for gold on Saturday after reaching the finals of the England Boxing National Development Championships.

Seniors Sunni Torgman, Ruhel Miah and Tessa Jones will all be battling it out in Banbury after successfully making their way through tough semi-finals, which were held in Swindon over the weekend.

Having twice seen a gold medal elude her, Torgman will be hoping it’s third time lucky after reaching a third final in a row by unanimously beating Emma Spencer from Canvey Boxing Club in the Under-60kg Female Class B division.

Competing in the Under-56kg Senior B division, Miah also won his semi-final on a unanimous decision, “boxing intelligently” to get the better of Army representative Connor Mahoney in a bout that Islington Boxing Club manager Reggie Hagland described as “a chess match”.

Meanwhile, Jones, who was boxing in the Under-51kg Female Class A division, returned to action for the first time since winning in the Golden Girls Box Cup in February.

But there was no sign of any ring rust as she outworked Eleanor Jones from Thames Valley ABC to gain a unanimous victory.

All three will now travel to Oxfordshire this weekend for one final bout at the Spiceball Leisure Centre.

Former national champion Charlotte Briant won’t be joining her clubmates in stepping between the ropes, however, after losing “a toe-to-toe scrap” against Amy Cooper from Gosport Boxing Club via a 3-2 split decision.

Hagland said the Under-75kg Female B division contest was “one of the most exciting” of the night, adding that the Islington team “didn’t have any complaints” about a result that could have gone either way.