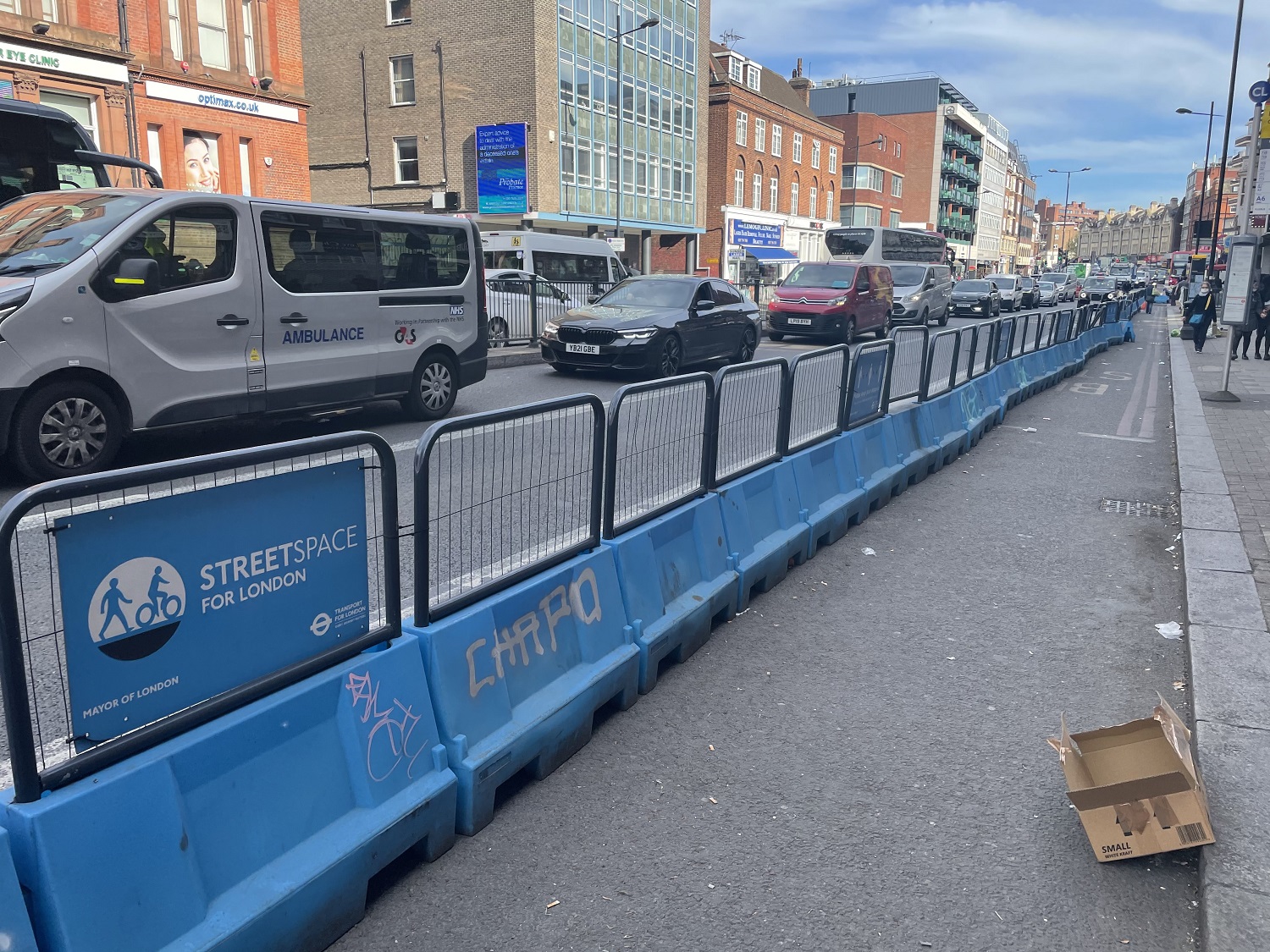 Barriers in Finchley Road, installed during the first wave of the pandemic

PAVEMENT widening measures introduced in Finchley Road to aid social distancing during the Covid-19 pandemic will be scrapped by Transport for London (TfL).

The area between Canfield Gardens and the O2 Centre had temporary barriers installed as part of the transport authority’s Streetspace programme in May 2020.

During the early stage of the pandemic, when less information was known about the transmission of Covid-19, it was thought the risk of passing on the virus outside was high. Two metre wide social distancing measures were encouraged by health bodies and the government. TfL along with local councils brought in pavement widening measures to ensure people could keep their distance.

However they were poorly used, and Camden Council has already withdrawn barriers in  areas including Well Walk and Hampstead High Street.

Research also now shows that the chance of transmission outdoors in the open air is minimal, with the main risk coming from indoor, poorly-ventilated areas.

In an email to councillors on Tuesday morning, a TfL official said: “In reviewing this scheme, we have found that the measures made on Finchley Road are no longer necessary because relatively few pedestrians are now using the extended pavements.

“This means there is sufficient space for pedestrians to safely social distance on the existing permanent pavement.”

Instead the previous disabled parking bay, loading bay and coach pick-up will be reinstated. Frognal and Fitzjohns representatives were told the reversal would be made soon.

Camden Council itself has introduced several schemes to encourage active travel on the back of the pandemic, using experimental traffic orders (ETOs). They include Kentish Town, where two cycle lanes were introduced. Councillors faced off in Camden’s full council meeting at the end of April over how the Town Hall is assessing its success against its £1.2m budget.

A decision is also expected in the next few weeks on whether part of Haverstock Hill from Prince of Wales Road to Pond Street will see two cycle lanes installed under a similar guise.

Opposition leader on Camden council, Conservative councillor Oliver Cooper said: “This is welcome news for residents and not before time.  Camden Conservatives have been asking TfL and Camden to remove the bottleneck for nine months.  A survey of over 1,000 local residents found that 90% supported removing the bottleneck, and yet for months, TfL and Camden refused to act.

“It will be a huge relief that TfL has finally acted.  However, TfL and Camden need to listen to residents, rather than just arrogantly sticking to their guns when their actions have caused more problems than they’ve solved.”

Camden Council declined to comment. Transport for London has been approached for a response.