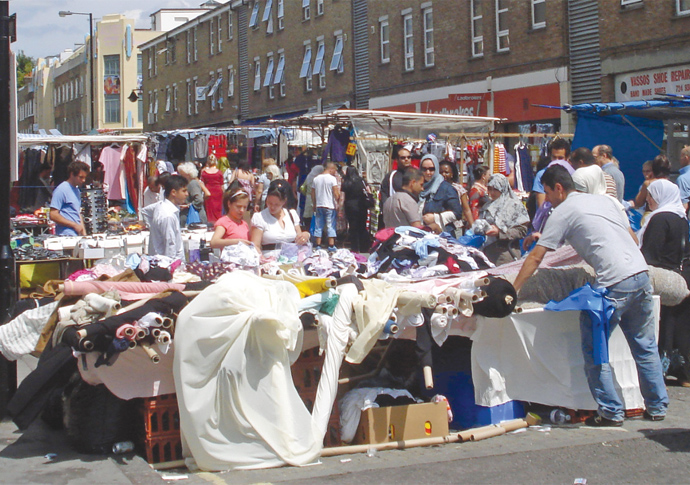 SUITABLY refreshed by the stained glass windows and the amber glass pint pots of the Traders Inn, Diary offers you a hand as we step forward into another instalment of our virtual tour of Westminster.

We are on the corner of Church Street, the market stretching out in front of us.

First, a bit of background. Dating from the 1790s, fields to the north were used as a hay market from around 1830, and soon traders selling vegetables and whatnot joined in. Its success was such that developers wanted a piece of the action, and Portman Market was built, named after land owner Sir William Portman, with an eye to rivalling Covent Garden. Its high ambitions never came to fruition, and in 1906 the market was sold off to become a car and lorry depot.

But the traders weren’t giving up so easily, and the rising population wanted a place to shop – so they set up their stalls in Church Street instead, and there they remain to this day.

As well as food and perishables, household goods, Church Street became home to bric-a-brac and antiques sellers. In the 1960s, a flea market-style air was apparent alongside the spuds, fish and meat. Eventually, the former Jordan’s department store was taken over by Alfie’s Antiques – offering space for nearly 100 different traders.

It was through this market the writer and illustrator Geoffrey Fletcher wandered, and recorded in his seminal London social history work, The London Nobody Knows.

For such a Londonphile, Fletcher was perhaps surprisingly born in Bolton in 1923. He moved to the city to study art at the Slade, and after graduating, began illustrating column breaks for the Manchester Guardian in 1950, and then moved to the Telegraph. Under the pseudonym Peterborough, which is still used today, he wrote and illustrated a diary column for three decades.

Architecture, the townscape and how we interacted with our streets was part of his passion: documenting what he saw with his artist’s eye and writer’s words gave flesh to this. Fascinated by the rapidly disappearing Georgian and Victorian parts of the city, those buildings not yet deemed worthy enough for preservation, he set about recording them and raising awareness of what was being lost.

In 1962, The London Nobody Knows was published and its words and illustrations touched a deep nerve: many recognised the changes Fletcher highlighted, and it helped kick-start a debate about what progress and the city scape actually meant. It would later be transferred to screen, with a marvellous voiceover provided by James Mason.

Watching Mason recite Fletcher’s words – and the footage of the Church Street traders, which you can find online – is a haunting experience. It is so close – within a generation and within living memory – but feels so far off.

“The street markets still have a certain Victorian boisterousness,” Mason says. “They are London’s free entertainment.”

“One of the best of them is here,” he continues, standing in the middle of Church Street while leaning suavely on a brolly. “A nice quiet street, you may say… but you should see it on a Saturday.”

From the memories of Mason and Fletcher, we leave Church Street behind and now go on to Edgware Road.

We shall pause for the moment and see if we can detect the ghostly crackle of static, the hum of an amp, and the whispered codes of “Romeo Alpha Delta India Oscar” buffs.

Once this stretch was the haunt of radio hams and hi-fi geeks: home to such celebrated stores as Henry’s Audio and Lee Electronics, Electro-Tech and the famous HL Smiths, which had towering, tottering shelves packed with dusty old valve amps.

Then there was Marshalls, known for its transistors, while Technomatic was an early forerunner in the computer age: Diary’s older brother bought a ZX Spectrum over the counter in the early 1980s, while they also sold DIY microprocessors.

Henry’s was the place for Diary, an Aladdin’s cave of components that you never knew you needed but suddenly became just the thing.

It began life in 1948 a little to the west on the Harrow Road, before opening a branch here.

As well as the hi-fi parts and the speaker cones, the woofers, tweeters, amps and valves, the miles of cabling, the disco lights and the CB radio dashes, you’d find those little, everyday things that before the dominance of online retail were heaven sent to be able to pick up in a high street shop: one reviewer of Henry’s remembered how he found an exact replacement intercom box for a block of flats built decades ago among their shelves.

Lee was mainly aimed at the radio ham, shifting portable personal radios. Those pre-mobile phone days saw the airwaves inhabited by those who enjoyed building radios and gassing away into the ether, but also used by minicabs, vets and others.

Sadly these shops are gone, and the reasons behind their demise are interesting.

Much of the supplies at places like Henry’s or Lee came originally from surplus government stock. In the same way army surplus clothing stores such as Laurence Corner in Euston traded in the gear made during the Second World War and into the Cold War, electronics stores did a good trade taking on both Ministry of Defence cast-offs, manufacturing surpluses and defunct projects.

Edgware Road was also well placed for light industries in London to sell up what they had spare – as Diary recalled last week, an aircraft component factory was based just a block away. Nowadays, factories are more precise with their output, and much has moved to places where wages are low – cutting out a vital supply line for those old electronic bazaars.

Added to this, society has undoubtedly changed: the custom base – people who fancy building something electronic from scratch is not the pastime it once was, while high street rents mean component sellers may as well do it online from a front room.

And on that airy echo from the past, we part for another week.