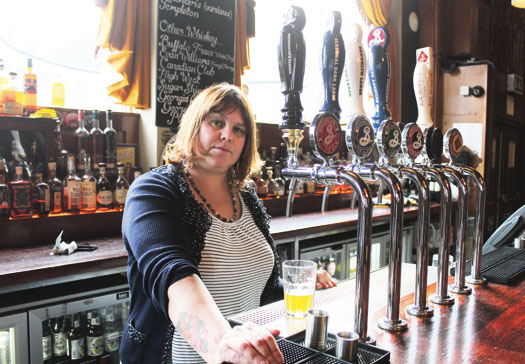 GOVERNMENT measures to soften the blow of massive increases in business rates that will hit Islington traders to the tune of £100million have been dismissed as “an absolute joke”.

Business owners had hoped that weeks of pressure, including from Tory backbenchers, would have had ministers delving deep into Treasury coffers to help traders in the borough who face an average 45 per cent rise from April – the third highest rise in England.

In the end, Chancellor Philip Hammond announced in his Budget speech on Wednesday a £300m “discretionary fund” to be used by councils to help companies that are badly hit, and a £50-per-month cap on increases for firms facing the loss of small business relief.

“I think this was a pathetic attempt at a Budget,” said Hak Huseyin, vice-chairman of Islington Chamber of Commerce, who is leading the local campaign against the tax hike.

“I wouldn’t call this relief. The £300m across the whole of the country, I don’t know what that will amount to. Islington’s [total] rates bill is going to go up by £100m alone. How’s that going to help the whole country? It’s a drop in the ocean.”

He added: “The fact that they offered a £1,000 [discount] to the pubs is an absolutely joke. St John’s Tavern’s rates [in Archway] are going up by £20,000 so if you knock a grand off, what difference does that make? I don’t see how pubs will survive.”

She said the increase might send her businesses under despite the announce­ment of the fund to help those affected by steep rises. “I have never been so affected by a Budget in my life,” Ms Thomas said. “Changes in income tax and VAT, you absorb them and move on. But this is forcing me to have to consider closing my doors. This is everything I’ve worked for and they’ve reduced it to no value.”

She added: “I have to appeal it and fight it [the rateable value calcula­tion]. It’s up to the council to look at my individual case and maybe I get some discretionary relief.”

Islington Council has backed a petition against the business rates increases signed by more than 13,600 people.

Asima Shaikh, the council’s economic development chief, said the announce­ments by the Chancellor “will do little to ease the pain”.

“The cap on increases for small businesses that will lose small business rates relief is welcome, but this is for a limited time only,” she said. “The total rates bill for Isling­ton’s businesses will increase by almost £100m from April 1, so the extra money for discretionary relief will make very little difference.

“We will continue to push the government to bring forward genuine support for local busines­ses and will offer support to those affected by the government’s increase in business rates bills.”

Many business owners have called for wholesale reform of the way in which rates are calculated after it emerged that Premier League club Arsenal – which generates more than £100m from home games – will see a reduction from April.

Mr Hammond told the Commons on Wednesday: “Business rates raise £25bn per year – all of which, by 2020, will be going to fund local government. So we cannot abolish them, as some have suggested. But, it is certainly true, in the medium term, that we have to find a better way of taxing the digital part of the economy. The part that does not use bricks and mortar.

“But in the meantime, there is scope to reform the revaluation process, making it smoother and more frequent, to avoid the dramatic increases that the present system can deliver.

“We will set out our preferred approach in due course and will consult on it before the next revaluation is due.”