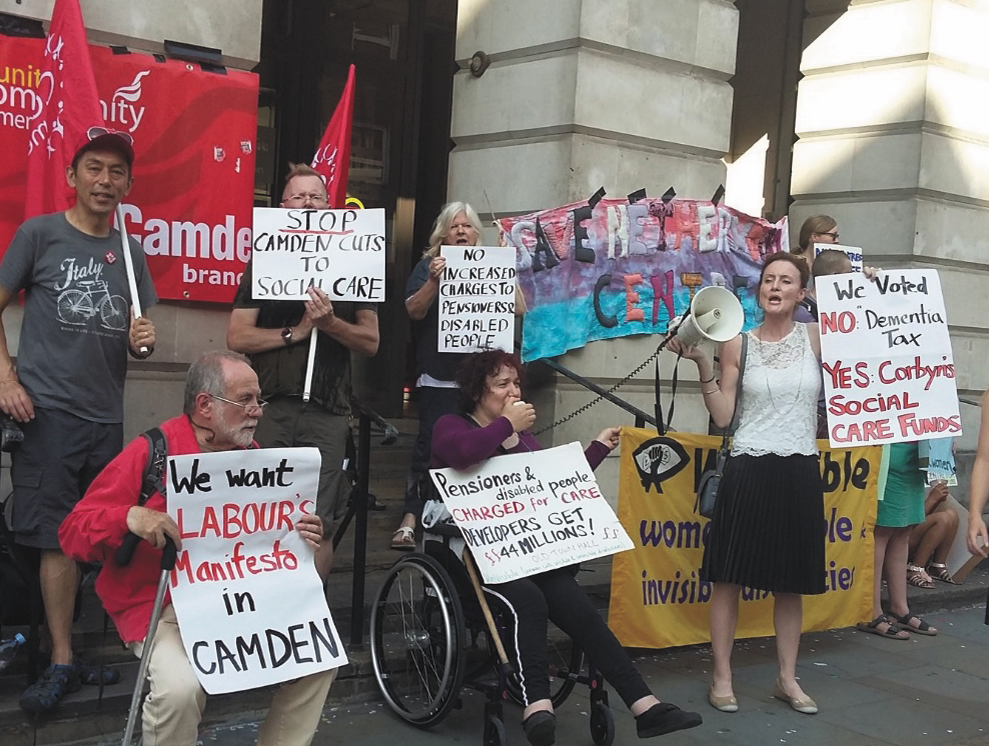 CAMPAIGNERS have warned that the council’s “reckless and shameful” decision to shut four elderly people’s day centres will come back to haunt them.

Jane Clinton, from the Save Netherwood campaign, has told Town Hall leader Georgia Gould that the closures would turn out to be a “disaster”. Day centres at Netherwood in Kilburn, Raglan in Kentish Town, Kingsgate Resource Centre in West Hampstead and Charlie Ratchford in Chalk Farm will shut down.

All the day services in Camden will be moved to a single “hub” at Kingsgate. The council, which revealed the closures plan in January, did not give details about the replacement centre until the day the final decision was taken.

Ms Clinton, who believes the lack of information could make the decision unlawful, led a deputation at a Town Hall meeting last Wednesday. “We are here this evening to mark the passing of a time when Camden Council listened, was respectful and learned from its mistakes,” she said. “Twenty-five years ago Camden Council had vision – it built Netherwood. Since then, the centre has offered joy, dignity, autonomy, comfort and solace for people with dementia and their carers. Thank you, Camden Council – of the past.”

She said the proposal to group elderly people with severe dementia in a “mixed-needs hub” would be a “disaster”. A report from Richard Lewin, adult social care director, said Camden would continue to provide “a state-of-the-art dementia centre of excellence, co-designed with people with dementia, carers and staff, including the development of a dementia garden at Kingsgate Resource Centre”.

Because of the “strong opposition to any disposal of the Netherwood Centre” the council planned to keep it as a community facility, the report said.

According to Mr Lewin’s report, cuts would “generate a saving of £582,000 per annum from 2018/19”, adding that attendance figures at Camden day centres had “reduced significantly” to an average of 40 per cent. Campaigners believe the attendance figures do not tell the whole story and that social services have been referring far fewer people to the centres in recent years because of the cost.

The council has pledged to review its adult social care referral system following concerns voiced by campaigners. The cuts include an increase in “direct payments” that disabled and elderly residents pay for home care, from £12 an hour to £12.50 an hour.

Councillor Gould told the meeting: “We started working on this one year ago when we were all facing an enormous amount of pressure – we faced a funding shortfall by 2018 of £10million [in adult social care]. “My approach to that was to meet with carers, experts in disabilities and the voluntary sector and work out how to address these challenges.”

She added: “We, as a group of councillors, were leading campaigns to challenge the minister about the pressures. But, unfortunately, we are still facing enormous funding challenges. When it comes to day centres – we have seven and all of those were under-capacity. That is part of a national trend.”