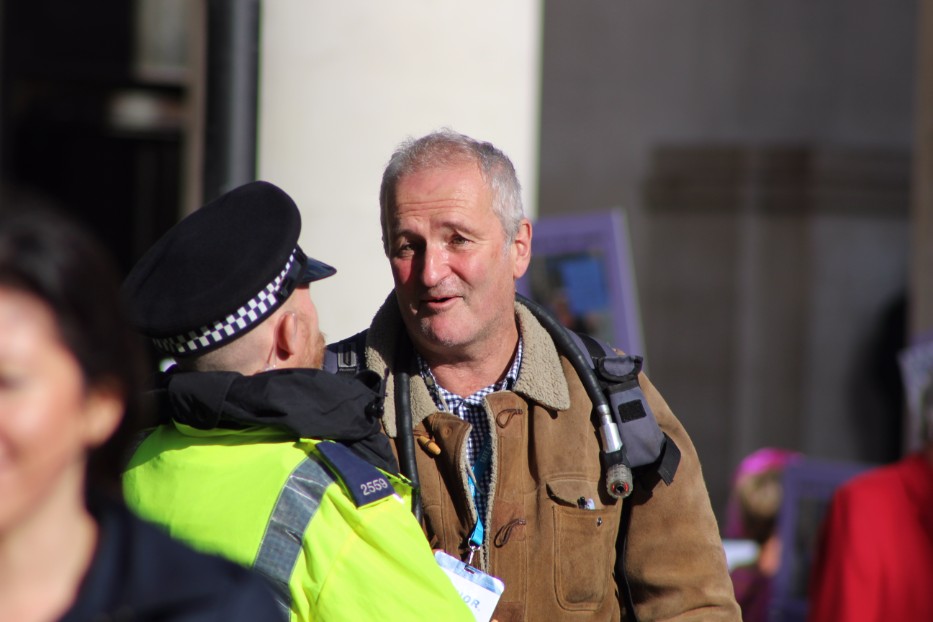 A CONSERVATIVE councillor has been fined £40,000 after being convicted for the second time of failing to fix safety hazards at one of his Primrose Hill rental properties.

It is the second time he has been convicted of failing to comply with an enforcement notice, which was first issued on the property in Chamberlain Street by the council in 2014.

Alongside rewiring the electricity supply at the Grade II-listed terrace, he was ordered to replace the ceiling and install up-to-date “fire-stopping” measures that can prevent the spread of flames in the event of a blaze.

Cllr Bucknell, who has represented Belsize ward for more than a decade, was fined £20,000 in January 2016, after admitting he had failed to carry out the works. But, the court heard this week, he has still not complied with the enforcement notice more than two years later.

Faisel Sadiq, representing Cllr Bucknell, said his client had first attempted to carry out the works himself, but was then ordered to down tools by the council until he received “listed building consent”.

Mr Sadiq said: “One of the reasons he was doing all of the works himself was finding himself in the position where he just didn’t have the money to instruct the specialists he needed too.”

He said that, despite appearing to own four properties, his client’s income was “modest”, because he was locked in a dispute over who held the deeds to three homes that he inherited from his father, the DIY TV personality, Barry Bucknell.

“The properties remained in the name of his father’s company and, as they were not transferred out of his father’s name, they became the property of the Crown,” Mr Sadiq said. Cllr Bucknell is attempting to reclaim the properties, the court heard. Mr Sadiq said that Cllr Bucknell, who was deselected by the local Conservative Association over the saga, was “already paying a price of sorts for this offence”.

“This has had an impact on both on his political career and on his standing in the community,” he said. District Judge Julia Newton, who also presided over the 2016 case, said the offence was “aggravated by the fact you are a councillor”, adding: “The local authority has consistently made efforts to try and progress the matter, but little progress has been made.”

Cllr Bucknell was ordered to pay a total of more than £57,000, which includes the council’s legal costs and £5,000 compensation to the tenant, who has been provided with a home on the same street until the works are completed.

The court heard Cllr Bucknell also had an agreement to repay the £100-a-week rent for the whole period she has been out of the property.

Cllr Bucknell said in a statement after the hearing: “My family have been renting out properties for generations and we have always done our best to be good landlords.

“This has been a very difficult time. At one point I was fined for running late with building works. I was then told to stop the works until I have listed building consents to work out how to replace a ceiling in traditional 1840 materials. The hold-up has been that does not comply with fire regulations. It has taken ages to try and find a solution.

“I had not realised that I could do some of the work in the meantime. As soon as I found out I did some of the work but still received a large fine. I hope that I can soon move forward to have the works completed.”

HE reached into his famous bag of props and pulled out a glass, filled it with his whiffy home-brew wine and toasted everybody in the chamber, and then the people of Camden. This, Jonny Bucknell, conceded was a “finish to my political career”.

Camden Council’s wildcard councillor still has many admirers in the streets around Primrose Hill and Belsize Park because of an off-piste nature in which he wondered aloud rather than toe a political line.

His Conservative colleagues screwed up their eyes when he’d come out with unscripted riffs such as taking on Camden Town drunks with Taser guns and allowing drivers to idle their engine if they were cold in their cars. 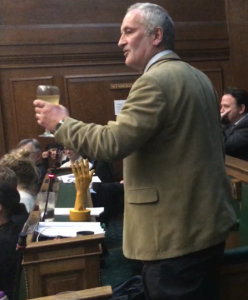 Given he slept in his own motor during political conference season – to dodge ramped-up hotel prices – this environmentally unfriendly suggestion might have seemed all the more wise to him. Ministers, meanwhile, have repeatedly been told that there is no need to build the HS2 rail link “because we’ve already got Skype”.

And back on the night of the Camden riots, Cllr Bucknell was there, axe in hand, apparently ready to defend his patch against Armageddon.

All of this could be tolerated within the Conservative group as “Jonny being Jonny” until he ended up in court for failing to keep a property he was letting to a correct standard. Legal cases dragged on, as did the improvement work. With an appearance in the dock this week and the local elections just 35 days away now, his deselection now seems to have been pretty inevitable.

During his final appearance at a full council meeting on Monday, Cllr Bucknell reminded councillors that his father, Barry Bucknell, the TV DIY presenter, had been a Labour councillor and his grandfather had also served, so his departure meant the end of a three-generation political story.

This, however, was interspersed with vintage Bucknell: a speech which mixed a Chinese proverb with a sort of inappropriate 1970s stand-up joke about how a man should best please a woman by “turning up naked with a bottle of beer”. You wouldn’t know he’d been facing a district judge earlier in the day.

He also repeated his favourite stunt, to let a mechanical rat run around the chamber in protest at reduced bin collections.

But, after four years locked together in this room, the councillors have seen it all before. Some sigh like parents waiting for their toddler to come down from a Vimto high. “Take it home with you if you want,” he told the Mayor’s bench, before insisting: “I’ll miss you and you’ll miss me.”

There was now nothing left in the toy-bag. So he reached for the wine and that toast, a final word from this chamber’s last eccentric.