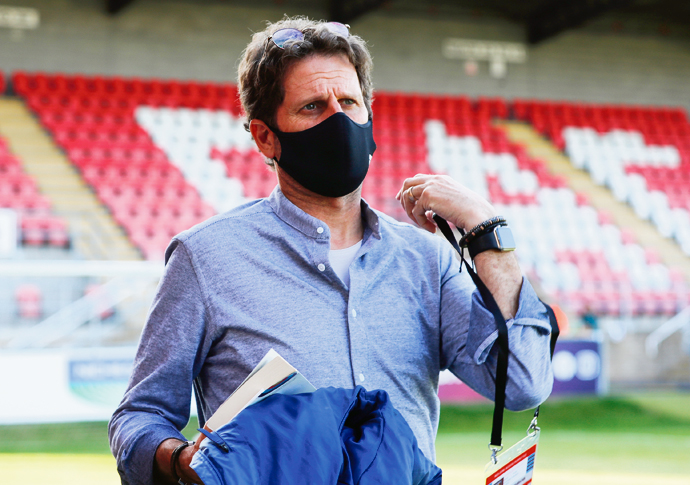 Manager Joe Montemurro says Arsenal can end the WSL season on a high. PHOTO: THE FA VIA GETTY IMAGES

THE importance of sports psychology to Arsenal boss Joe Montemurro was underlined this week when the Tribune quizzed him on a job advert.

The Gunners are searching for a full-time psychologist to work with the women’s first-team “on and off the pitch” and Montemurro spoke from experience as he explained how vital he believes the role is within the club.

“Any level of support that players and staff can get from a well-being and mental health expert, I think is huge,” he said.

“From a personal perspective, I’ve always used a psychologist or someone in the performance psychology field to give feedback on me, on how I speak to the group, on some things that maybe I don’t see.

“So it’s not just the mental health part, in terms of now and Covid and the players being away from family and the extra support they need, but also the mechanisms of running a high-performance team: communication amongst staff, and communication from staff to players.”

The 51-year-old Australian coach, who joined the club in 2017, said this was not a new role.

“We’ve had psychology support throughout my tenure,” he added.

Arsenal have not achieved as much as they had hoped in the “rectangle” this season – their title ambitions squashed by machine-like Chelsea and Manchester City, the impressive form of Casey Stoney’s Manchester United and points dropped against Reading.

But with three Champions League places up for grabs next term, there is still much to aim for, although there can be no slip-ups in the run-in.

A 4-0 win over Aston Villa on Sunday, in the two sides’ first encounter in any competition and Arsenal’s first win in four outings in 2021, was a start. That match was settled in the second-half by goals from Vivianne Miedema, captain Jordan Nobbs, Katie McCabe and Lisa Evans.

“It’s one game at a time. We know what we need to achieve, we’ve got targets that we can control and we know we can,” said Montemurro.

“We know we have the football, the players, the belief, the preparation to be the best that we can be and we now have started the ball rolling and the rhythm, hopefully, for a very good run home.”

Birmingham City are next up for Arsenal on Sunday. Tottenham, who lost 3-2 to Everton at the weekend to extend their losing streak to three matches, will look to get back on track with a trip to Brighton.

Both matches are live on The FA Player.

• Emma Hayes and her Chelsea side were cool under pressure on Wednesday night as they bounced back from a red card and two penalties to beat Atletico Madrid 2-0 in the last-16 of the Champions League.

Sophie Ingle was sent off just 12 minutes in, but keeper Ann-Katrin Berger stepped up to save not just the penalty that followed, but a later one too.

Maren Mjelde made no mistake when Chelsea won a spot-kick of their own after the break and Fran Kirby made it 2-0 just after the hour.

“It was a wonderful performance of doing the right things at the right time,” said former Parliament Hill School pupil Hayes afterwards.

“I felt calm throughout the whole game. I didn’t feel the stress of the game, [and] I didn’t think the players did.”

Chelsea travel to Italy next Wednesday for the return leg, but in between they face West Ham in the WSL on Sunday.