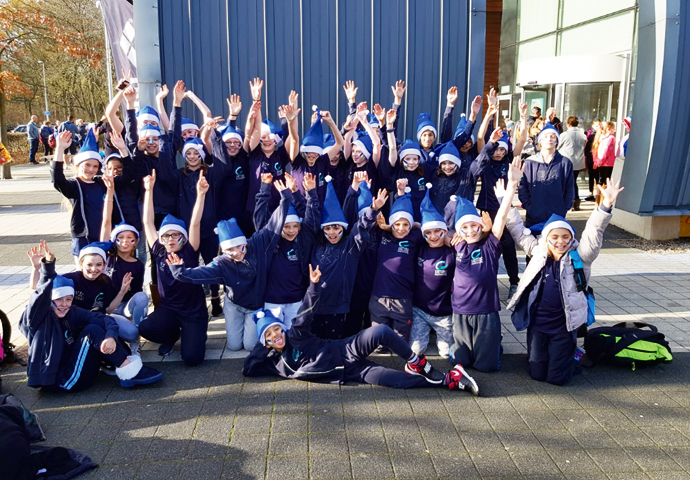 THE Christmas cheer arrived early for a team of top young swimmers after they placed on the podium at a national competition featuring more than 200 of the best clubs in the country.

The super squad from Camden Swiss Cottage Swimming Club couldn’t hide their delight after finishing third in the 2018 Arena Junior Inter-League National Final, which took place on Sunday in Corby.

The team, which comprised the club’s youngest swimmers, aged between nine and 12 years old, was making only Camden Swiss Cottage’s second appearance in the national final, having finished in fourth place last year.

They qualified in sixth spot for this year’s event, which is a culmination of competitions between the 11 leagues affiliated to the Arena Junior Inter-League. Within these leagues there are more than 200 swimming teams throughout England and a team from Wales that take part.

As expected, the opposition was fierce from the outset as Camden Swiss Cottage faced some of the best clubs in the country – namely City of Leeds, Guildford City, Tynemouth ASC, City of Coventry, Southport, City of Derby and Leicester Sharks.

While the entire team performed consistently highly to add precious points to the tally, the stand-out performance came from Nick Finch. The talented young swimmer finished first in the 50m butterfly and third in the 50m backstroke in the 12-year-old age group.

The points he amassed in these events were enough to earn him the title of Joint Top Boy in the 12-year-old age group – an honour that he repeated from the 2017 meet when he was the Top Boy in the 11-year-old category.

Team captains for the day, Charlotte Shaw and Nik Markov, were all smiles when they were presented with the third-place trophy and the medals for the whole Camden Swiss Cottage squad.

“To make the national final of this competition is a massive achievement in itself,” beamed assistant head coach Gerry Gillespie: “Myself and the coaching team are beyond proud of our third place finish.

“We were all hugely impressed by the positive attitude, professionalism and team spirit demonstrated by all of our youngsters. They are a credit to the club and to the borough.”