Thomas Breen murder: In his own words, son's appeal for justice 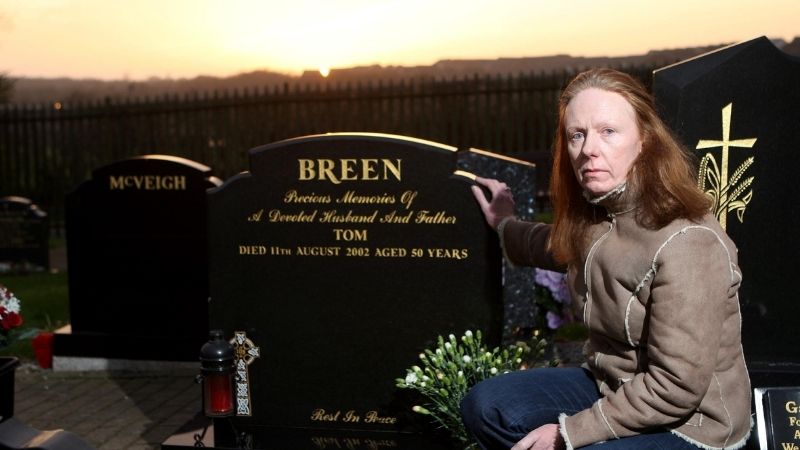 Stephen Breen’s mother at the graveside in Downpatrick [Matt Mackey]

I CAN remember that awful night as if it was yesterday.

It was August 10, 2002, and I had just returned to my flat in Belfast when my frantic mother phoned to tell me my father had been stabbed in London.

My mother was told by a friend that my dad was in surgery and that he should be fine. But just two hours later and after my brother Paul had joined us by the phone, our world was turned upside down about 12.20am on August 11, when we were informed my dad was dead.

I try not to think about that moment too much but I can remember my mum, my brother and I holding each other, sobbing uncontrollably.

We just couldn’t believe it. This can’t be happening.

The father who was also my best friend murdered in a busy street. But the reality of the situation soon sunk in and I knew we would have to inform my father’s mother that her first-born son was dead.

How can anyone comprehend telling a mother her beloved son was dead because a cowardly thug plunged a knife into his chest?

Approaching my aunt Catherine’s door, where my grandmother was staying, I was lost for words and my stomach was churning. They knew something was wrong when they saw the tears in my eyes.

I struggled to get the words out which told them my father and their loving son and brother had been murdered. They were hysterical and, after dad’s other sister in Belfast arrived, the grief was just unbearable.

We were all in shock and deeply traumatised. I then returned home to be with my mother and brother. It wasn’t long before word spread around our home town that my father had been murdered. We were thrown into a world of despair through no fault of our own – nothing prepares you for an event like this.

The following day my mother and I got the first flight to London where we met the police officers leading the hunt for his killers. But the real trauma came later when we were all taken to the morgue.

Our grief was compounded when we were told we couldn’t even touch, hold or kiss him.

We had to look at my daddy through a glass window. After the visit we were then told we would have to wait five weeks before my dad’s body was returned to Ireland.

We stayed in London for only one night and the only thing that got me through that night was a friend sending me a text with the words You’ll Never Walk Alone, one of my dad’s favourite songs.

I couldn’t wait to get home to be with my brother and on the plane home my heart went out to my mother. The tears in her eyes told a story of an immense pain and loss.

During the five weeks before my dad’s body was returned, the house never stopped.

I often found myself going for long walks just to get away from everyone. I still don’t know how we managed to get through those five weeks.

We just wanted my dad home and didn’t even think about the people who committed this terrible act.

And when my dad’s coffin left the house for the last time, I found it hard to believe that this was the last time I would see him.

Around 600 people attended the funeral and for the first time in five weeks I remember thinking: what if the people who did this to my dad could see the devastation they had caused.

We have been robbed of a human being who was a central part of our lives. When anniversaries, birthdays and Christmas come up, it just makes it even harder to deal with.

We know nothing will bring back my father, but we have a right to justice. These people should also tell us why they have caused so much devastation and robbed an innocent man of a life he enjoyed.

We are not out for revenge and just want the people who did this to face court.

These people are still out there and we would hate for any other family to experience the pain we have suffered. If the suspects’ families could just step into our lives, then maybe this would make them think twice about living with a cold-blooded murderer.

They didn’t just take one life that night, their actions had, and still have, a massive impact on many lives.