Special milestone for football festival that aims to bring communities together

THE sun was shining on Tuesday, and the action on the pitch shone even brighter as boys and girls football teams went head-to-head in a bid to capture glory in the 2018 Camden Unity Cup. 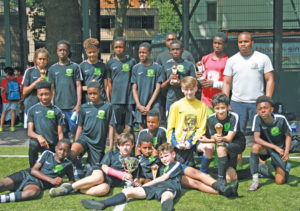 The much-loved festival, which was held at Coram’s Fields in Bloomsbury, celebrated its 21st year of bringing communities together through their love of the beautiful game – an objective they undoubtedly accomplished once again. 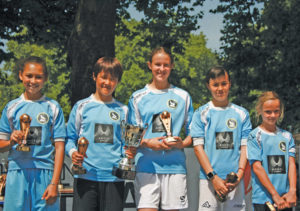 Cries of “Campeone, campeone! Olé, olé, olé!” rang out from the presentation stage as Islington Warriors celebrated their victory over Chettle Court Rangers in the Under-10s boys’ final.

The dynamic duo of Ché Amui-Sharpe and Zhaviah Campbell deservedly shared the man-of-the-match award as the Warriors ran out 2-0 winners. 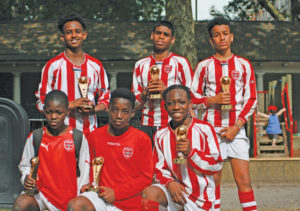 Chettle Court Rangers suffered similar disappointment in the Under-12s boys’ final, as they were beaten 2-0 against Soccer Shop Window FC.

However, Rangers were not to be denied for a third time, and in the Under-14s boys’ age group two goals from flying winger Amario Cozier helped them claim a 3-0 victory over Arsenal Kicks. 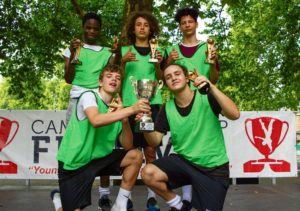 Organised by a team of young volunteers from Fitzrovia Youth in Action, the boys’ tournaments were rounded off by a victory for Camden FC, who ran out 2-1 winners in the Under-16s final.

In the girls’ Under-12s final Highbury Wolves bounced back from the disappointment of losing last year’s Under-11s Camden Unity Cup final by beating Arc FC 8-2 this time around.